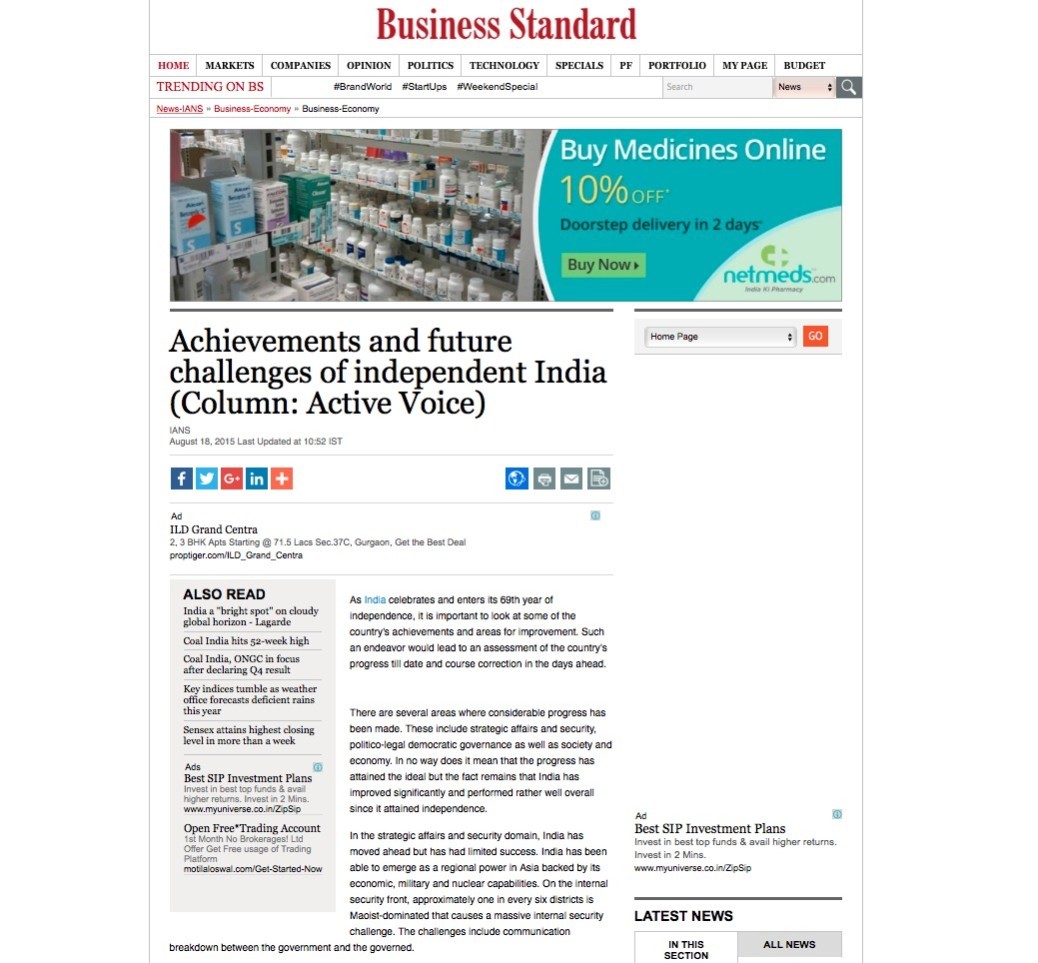 As India celebrates and enters its 69th year of independence, it is important to look at some of the country’s achievements and areas for improvement. Such an endeavor would lead to an assessment of the country’s progress till date and course correction in the days ahead.

There are several areas where considerable progress has been made. These include strategic affairs and security, politico-legal democratic governance as well as society and economy. In no way does it mean that the progress has attained the ideal but the fact remains that India has improved significantly and performed rather well overall since it attained independence.

In the strategic affairs and security domain, India has moved ahead but has had limited success. India has been able to emerge as a regional power in Asia backed by its economic, military and nuclear capabilities. On the internal security front, approximately one in every six districts is Maoist-dominated that causes a massive internal security challenge. The challenges include communication breakdown between the government and the governed.

In the sphere of politico-legal and democratic governance, significant achievements have been made. From 54 political parties in the 1951 general election, India had moved up to 464 in the 2014 general election. It shows a deepening of the democratic process. There have been periods of darkness threatening India’s democratic institutions at certain moments in post independent India. These for an example include the imposition of emergency and curtailment of press freedom in the period 1975-77. But India’s institutions like the free press and an independent judiciary have ensured that India remains a society based on rule of law. India’s democratic institutions and framework have ensured stability even in periods of political chaos. Another achievement that barely gets mentioned is that India has been able to keep out the military from the democratic process. It also shows prudence on the part of military generals and defence personnel. Challenges now and for the future include ensuring greater transparency, accountability and independence in the broad framework of checks and balances on which India’s democratic framework rests. Also, resolving administrative issues and attitudinal issues like pendency in courts and apathy of the governing class remain a challenge threatening the rule of law and democratic governance.

On the socio-economic front, the country started out with a ‘command and control’ economy. It meant centralized planning and a very big public sector but soon there were inefficiencies and labour issues. That resulted in a move towards a more open liberalized market driven model of the economy starting in the 1980s and culminating in the 1991 reforms. Post this, the economy has seen greater private and foreign participation and seen the emergence of a new middle class. The transformation in the physical, digital and banking sectors has been nothing short of revolutionary.

India’s Gross National Income (GNI) at constant prices has increased more than 35 times from Rs.2.92 lakh crore in 1950-51 to Rs.105.28 lakh crore 2014-15. Similarly, the per capita income at current prices has risen from a paltry Rs.274 In 1950-51 to a decent Rs.88,533 in 2014-15. Foodgrain production grew from 50.8 million tonnes in 1950-51 to an estimated 264.77 million tonnes in 2014-15 that indicates more than a five-fold increase and the fact that India is food secure for the time being. It was made possible with rapid advances in agricultural technology. The green revolution and white revolution are well known, and recently a solar powered ‘saffron’ revolution is now being envisaged on similar lines for energy security. Advances in healthcare and education levels have also been observed. The life expectancy at birth has almost doubled from 36 years in 1951 to 66 years in 2011 due to the availability of better medicines, access to improved healthcare facilities and improved overall well-being. Similarly, diseases like smallpox and polio have been eradicated. In education, the number of universities and colleges has gone up from a minuscule 27 universities and 578 colleges in 1950-51 to an estimated 712 universities and 36,671 colleges in 2014. Similarly, literacy rates have almost quadrupled from 18.3 percent of the population in 1951 to 73 percent in 2011.

All this shows India’s improved performance on several critical parameters of socio-economic development. On the flip side, many challenges remain. These include reducing poverty, crime and corruption and ensuring environmental sustainability amid increasing urbanization. Also, access to improved housing, sanitation facilities, healthcare, and education remain crucial areas for improvement. So do improvements in India’s creaky infrastructure. Then, bridging the urban-rural divide and sustaining the economic growth momentum are all work in progress. Reduction in Indian society’s divisions based on language, caste, religion, region and other individual identities will also go a long way in strengthening India’s social fabric.

In the years ahead, much will depend on how India performs along these dimensions. It will hopefully culminate into greater fruits of independence, freedom and equality among its people.

Published in Business Standard on August 18, 2015. To know more