Article 370 to be revoked: Move to make Jammu and Kashmir less dependent on Centre for funds

Home Article 370 to be revoked: Move to make Jammu and Kashmir less dependent on Centre for funds 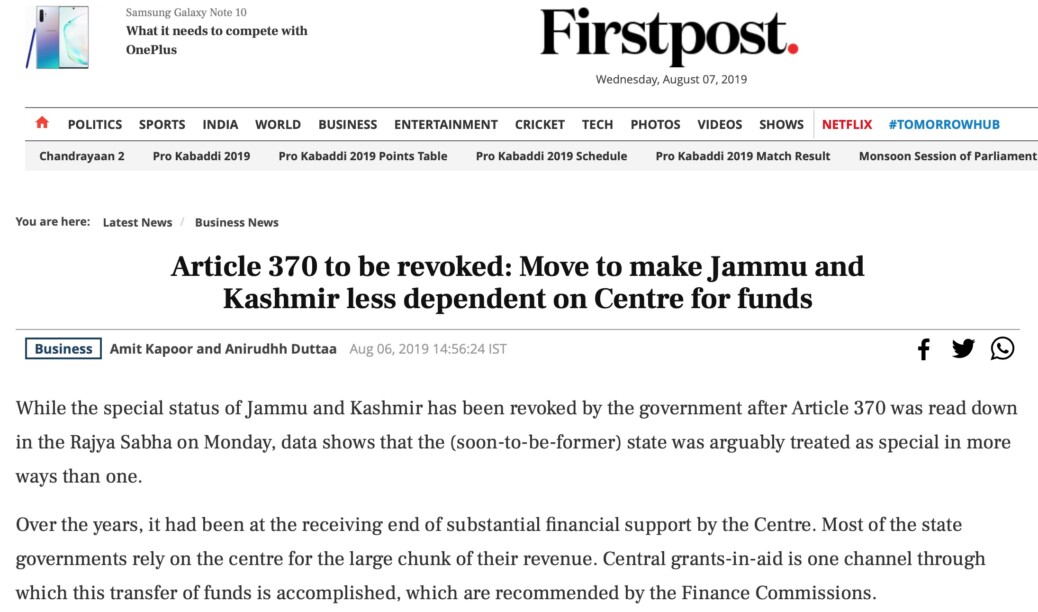 Article 370 to be revoked: Move to make Jammu and Kashmir less dependent on Centre for funds

While the special status of Jammu and Kashmir has been revoked by the government after Article 370 was scrapped in Rajya Sabha, data shows that the (soon-to-be former) state was arguably treated special in more ways than one. Over the years, it had been at the receiving end of substantial financial support by the Centre. Most of the state governments rely on the centre for the large chunk of their revenue. Central grants-in-aid is one channel through which this transfer of funds is accomplished, which are recommended by the Finance Commissions.

An analysis of the grants from 2005-06 to 2018-19 reveals that Jammu and Kashmir received around 10.5 percent of all the central grants given over the period, which was the highest among all states as seen in Figure 1. The state of Uttar Pradesh received the second-highest share of central grants during the period at around 9 percent. These allocations are grossly disproportionate considering the fact that Jammu and Kashmir is home to only 1 percent Indian while Uttar Pradesh is India’s most populous state accounting for over 16 percent of the country’s population. 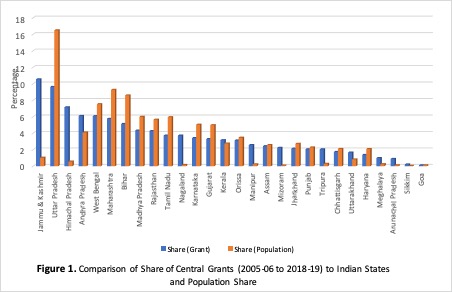 Moreover, the state of Jammu and Kashmir not only accounts for the highest share of central grants but is heavily dependent on the funds from New Delhi for its own revenue. The state budget figures for 2018-19 depicted in Figure 2 show that the grants-in-aid form more than half percent of the state’s revenue. If central taxes are taken into consideration, this share goes above 70 percent. The capacity of the state to generate its own revenue forms less than 30 percent of the total revenue receipts. 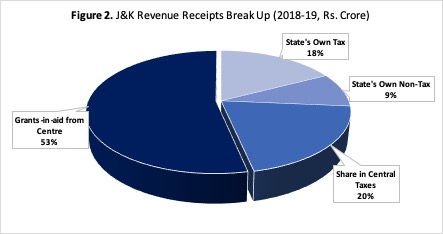 But despite disproportionate support received by Jammu and Kashmir, the state’s finances are in a precarious state. According to the budget estimates for 2018-19, Jammu and Kashmir’s Gross Fiscal Deficit (GFD) to GSDP ratio stands at 4.5 percent, second only to Himachal Pradesh among the special category states as seen in Figure 3. Over the four-year period from 2015-16 to 2018-19, the average GFD to GDP ratio has been around 5 percent for Jammu and Kashmir, which is significantly above the national average of 3 percent for the same period. 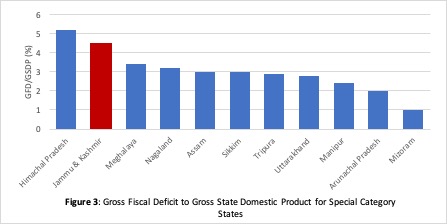 The move to abrogate Article 370 and 35A will allow the region to develop more economically as it will allow more freedom of movement of people and ensure easy access to assets like land. In such a scenario, the economy will also become less dependent on the Centre for funds and will be able to better manage its finances.

The analysis was published with First Post on August 6, 2019.