Perils of overemphasis on GDP Growth? 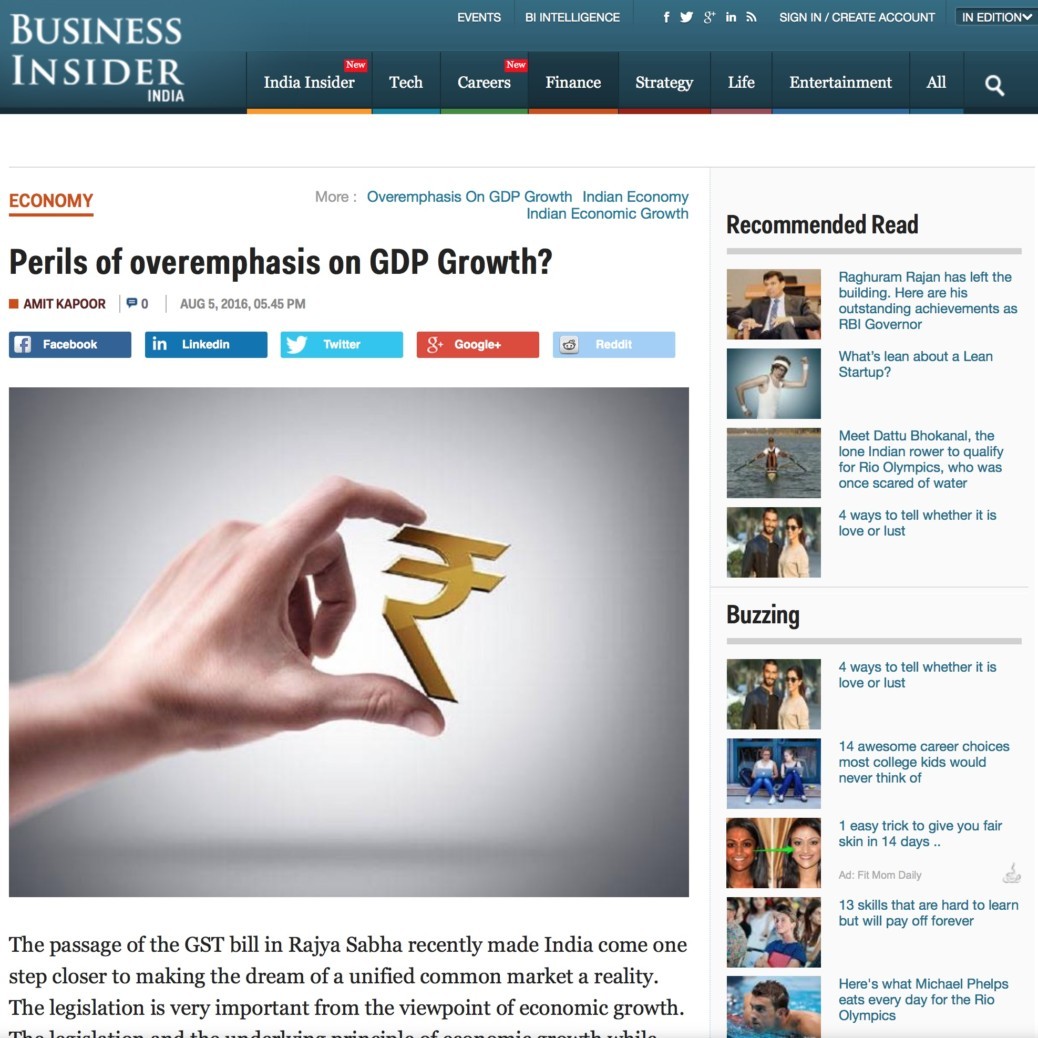 Perils of overemphasis on GDP Growth?

Recently India became the world’s fastest growing major economy surpassing China. Global economic prospects, June 2016 published by World Bank predicts that growth will notch up to 7.7 in 2017. India is currently the third largest economy by purchasing power parity. The economy is currently benefiting from the low energy prices, but there are concerns on the external side with trade shrinkage. Recently, finance minister Arun Jaitley speaking at a conference in China recently said: “Notwithstanding the global headwinds, however, India continues to maintain a high growth rate at 7.6 percent in 2015—16 compared to 7.2 percent in the previous year.” These are commendable economic achievements of the Indian economy that reflect progress in the economic dimension.

All these statistics and statements gave us common citizens great pride and joy as it should. However, does this bright economic outlook and focus on economic growth, make much sense to a layman apart from being some abstract statistics and esoteric economics. The common citizens of any country care more about the real impact of growth in terms of improvement in their standard of living, provision of basic facilities such as electricity, drinking water, healthcare systems etc. These institutional changes take time and these are also linked to a nation’s progress. This is where it becomes important to look at these aspects, which are not necessarily reflected in growth statistics of a country.

A pertinent question to ask at this point is what measures should be viewed in regards to national progress? Is GDP a good measure to reflect a nation’s progress? For too long economic progress, precisely GDP growth rates have been used as a measure to ascertain the health of nations. The reason is that trickle-down theory is believed to be true which assumes that growth for the rich will necessarily percolate down. This means gains for the richer sections of the society will eventually create opportunities for the economically disadvantaged sections helping them to improve their standard of living. While there is some amount of truth in this assertion several other factors also play a critical role in improvements in the standard of living of people.

Another fallacy of the argument about GDP as a reflection of national progress takes into account consumption and its usage for welfare in society. The argument flows this way: GDP growth is considered to be a proxy for consumption it is assumed to be an indicator of the wellbeing of individuals. While consumption is important it does not capture a myriad of other things, which are important in any economy. Despite the high growth rates in India, there have been concerns about the lack of job creation, rising inequality, environment deterioration, farmer suicides, child labour, rising unemployment, corruption and crimes. Roughly 30% of the people live below 1.25$ a day and 70% live below 2$ a day. Almost half of the children younger than five years are stunted due to improper nutrition and sanitation. Apart from this corruption is endemic with India ranking 76 on Transparency International’s Corruption Perception Index.

The dual realities reflect that the transformation of economic progress to social development and progress is not really happening. Recently, Jean Dreze pointed out that “India’s average economic growth rate of 7.5 per cent in the last 12 years has failed to bring about any significant improvement in the quality of life of the common people.”

Amidst these varying views of reality, a question arises that has the focus been fully correct to overemphasize economic growth as a measure of a nation’s progress? GDP undeniably is important for an economy but it comes with its own flaws as was pointed out by none other than Simon Kuznets, its founder who stated that “The welfare of a nation can scarcely be inferred from a measurement of national income”, but the world seems to have ignored that message completely.

Thus it is important to see the flaws of overemphasizing on GDP growth as a measure of national progress. Issues like disparity, environment and equity are equally important. In the west, there is growing realization of these aspects. It is time countries like India take stock of these while taking about national progress. National progress will be incomplete without taking into account social and economic progress both of which are equally important. An overt focus on one at the cost of another could spell disaster for the overarching goal of a nation’s progress.

Published in Business Insider on August 5, 2016. To know more