A budget for the United Federation of India

Home A budget for the United Federation of India 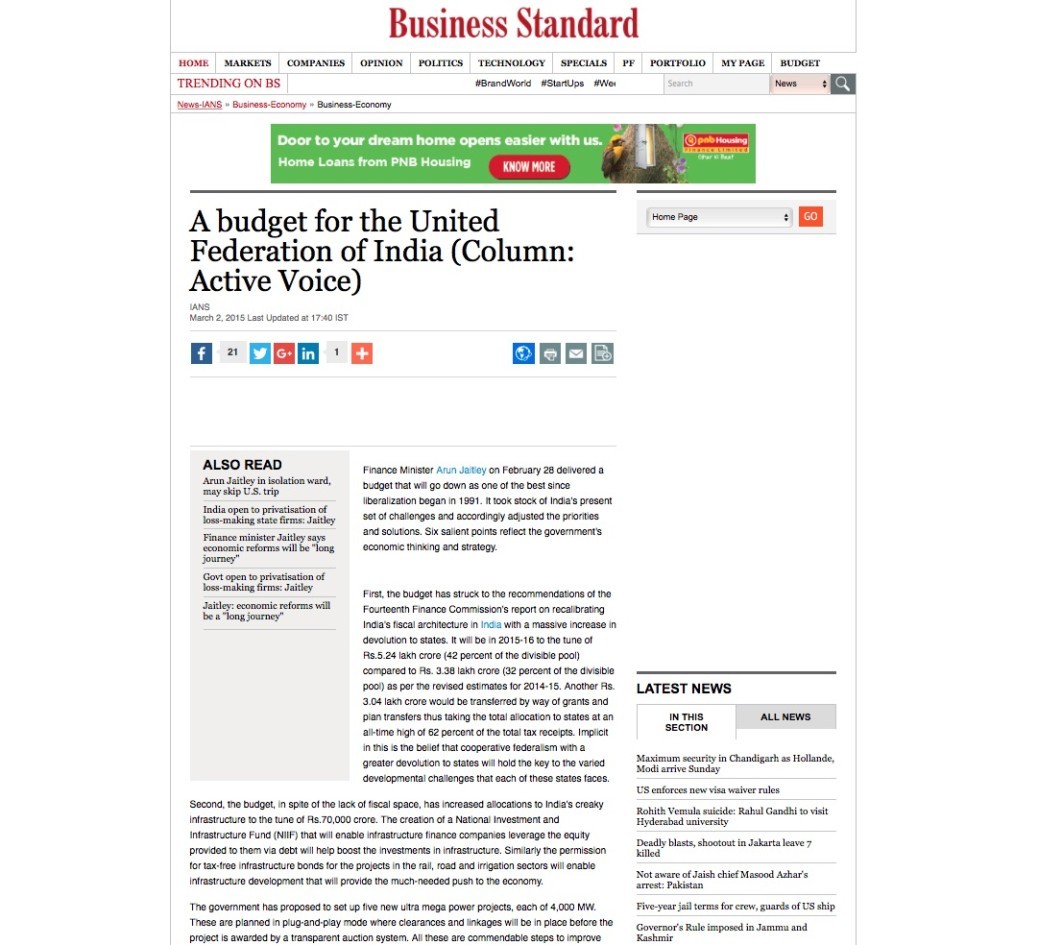 A budget for the United Federation of India

Finance Minister Arun Jaitley on February 28 delivered a budget that will go down as one of the best since liberalization began in 1991. It took stock of India’s present set of challenges and accordingly adjusted the priorities and solutions. Six salient points reflect the government’s economic thinking and strategy.

First, the budget has struck to the recommendations of the Fourteenth Finance Commission’s report on recalibrating India’s fiscal architecture in India with a massive increase in devolution to states. It will be in 2015-16 to the tune of Rs.5.24 lakh crore (42 percent of the divisible pool) compared to Rs. 3.38 lakh crore (32 percent of the divisible pool) as per the revised estimates for 2014-15. Another Rs. 3.04 lakh crore would be transferred by way of grants and plan transfers thus taking the total allocation to states at an all-time high of 62 percent of the total tax receipts. Implicit in this is the belief that cooperative federalism with a greater devolution to states will hold the key to the varied developmental challenges that each of these states faces.

The government has proposed to set up five new ultra mega power projects, each of 4,000 MW. These are planned in plug-and-play mode where clearances and linkages will be in place before the project is awarded by a transparent auction system. All these are commendable steps to improve India’s decrepit/at places absent infrastructure.

Third, there are several institutional changes that have been proposed. This includes a Public Debt Management Agency (PDMA) that will bring both India’s external borrowings and domestic debt under one roof. In addition, the plan to merge the Forward Markets Commission with SEBI will have a soothing influence on the wild speculation in the market. The proposal to enact a comprehensive new law on black money, one that seems rigorous in intent, will aid in deterring corruption – atleast through formal channels. Also, the proposal to create a National Agricultural Market (NAM) will have an effect of moderating price rises.

Fourth, the budget tries to provide a stable, predictable and globally competitive tax policy regime for the all sections of society, particularly the corporate sector, over the next four to five years. The tax rates for corporates will be lessened over the next four years from the earlier 30 percent to 25 percent. This is in line with the commitment to make it easier for corporates and investors to do business in India vis-à-vis other Asian economies. The commitment is also reflected in the government’s launch of an e-biz portal that integrates 14 regulatory permissions at one source. Similarly, the wealth tax has been abolished with an additional surcharge put in place for the income of the super-rich. Also, the focus on implementation of GST from the next year means that India will be a unified market – one that will boost its growth and competitiveness.

Fifth, the budget has done well to focus on social progress of India’s citizens. The JAM Number Trinity – Jan Dhan accounts, Aadhar card and mobile phones – as mentioned in the economic survey aims to cut down leakages while maintaining targeted subsidies. Similarly, the schemes for insurance will provide a safety net for most people, including the workforce and the elderly. The shift to market-based solutions is evident here and reflective of the government’s general approach in trying to solve problems through the the market route. For promoting cleanliness, the government has called for 100 percent exemption for donations made to Swachch Bharat Kosh and the Clean Ganga Fund.

Finally, in line with the social objectives, the budget addresses the challenges to education, entrepreneurship and skill development in India. The government seems keen to invest in education by opening up institutions of higher learning like IITs IIMs and AIIMS in select states. This is in line with the view that each state should have one major central institution. The government has also proposed creation of a Micro Units Development Refinance Agency (MUDRA) Bank, with a corpus of Rs 20,000 Crore that aims to provide credit to hard-working entrepreneurs at the bottom of the pyramid. This is meant to increase the confidence of young, educated and aspiring Indians who can now aim to become first-generation entrepreneurs. The announcement for launching a National Skills Mission through the skill development and entrepreneurship ministry will cater to skilling the young.

All these points are indicative that the budget has factored into account the reality of India and has accordingly devised an economic strategy. It also signals the focus towards decentralized federal governance, a stable and business-friendly tax policy and market-oriented solutions to social and economic problems. The budget is visionary and pragmatic in content and form and touches on all facets of life of citizens and has indicated ways of transforming them. The main challenge will lie in making people understand the long-term implications and the implementation of the budget.

Published in Business Standard on March 2, 2015. To know more