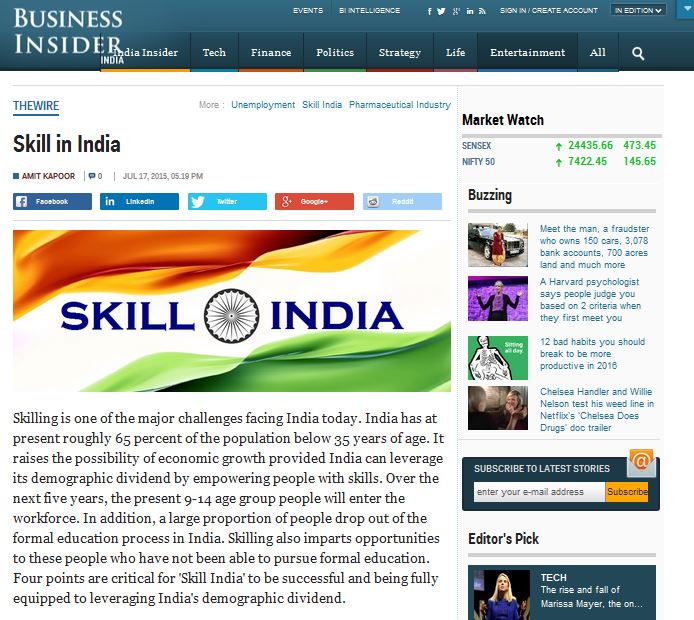 Skilling is one of the major challenges facing India today. India has at present roughly 65 percent of the population below 35 years of age. It raises the possibility of economic growth provided India can leverage its demographic dividend by empowering people with skills. Over the next five years, the present 9-14 age group people will enter the workforce. In addition, a large proportion of people drop out of the formal education process in India. Skilling also imparts opportunities to these people who have not been able to pursue formal education. Four points are critical for ‘Skill India’ to be successful and being fully equipped to leveraging India’s demographic dividend.

First, the focus should be on mapping skills across various sectors for employment. It’s means that the industry, as well as the government, should look at enlisting the skill requirements of the country. The industry should also interact frequently with institutions is telling them their requirements so that there is no mismatch between industry expectations and institutional curriculum. It also ensures that people who go to these institutions and imbibe the skills become job ready. The focus of skilling should be on future skills and jobs of the future and not on curriculum that is outdated and redundant in the industry.

Second, mapping the skills with location’s requirements, and institutions is very important. At a national level, the need is to map the skill requirement of the world and impart skill training appropriately where there is a huge demand for the workforce at the international level. It also means that states and, in particular, cities should identify areas in which they have conventional strength. For instance a location like Hyderabad that is good in the pharmaceutical industry should focus on providing skills for that particular sector. Similarly, a place like Shimla, which attracts tourists, should focus on skills for development of its tourism cluster. These have to be locally identified and then taken to appropriate institutions that can provide training in these areas.

Third, it is important to build institutions that not only provide formal training but also provide certification to people. It is often a neglected dimension of skilling. An automobile technician working in a factory in say Germany takes pride in his job. In India, one often find low self-esteem and low worth of such individuals in the society. Certifications and instilling a sense of confidence and pride is a must for development of skill potential of India. Certifications should also be provided to people who can pass basic tests but have no formal recognition at present.

Finally, formalizing the process of skilling and provision of multiple skilling are the need of the hour. It is because formalization would lead to a better and a systems-oriented approach to skilling that to date has been a largely informal process. For instance, driving is often learnt not by training institutions but by some other driver teaching the newer one. If the process is formalized, it would certainly lead to better outcome during the process of learning and even post that once the driver has finished training. Similarly, a large number of people often face problems in operating mobile phones. If training is provided for learning the basic functionality, a large number of problems will be taken care of. In the present time, the need is to look for multiple skills and constant up gradation of existing skills. The issue of entrepreneurship is also related to the issue of skilling with people having multiple skills often wanting to start their venture. Thus, skilling empowers and at the same time is necessary for realizing the aspirations of people.

If India focuses on these broad points, it can surely leverage its demographic dividend at the same time solving the problem of unemployment of youth. It would require a concerted effort on the part of policymakers at various levels, technical institutions as well as the industry in understanding the skill gap and in taking steps to reduce the gap. In the years ahead India has the potential to become the human capital of the world. Realizing this dream cannot be achieved without systematic thinking and implementation of the ‘Skill India’ mission.

Published in Business Insider on July 17, 2015. To know more