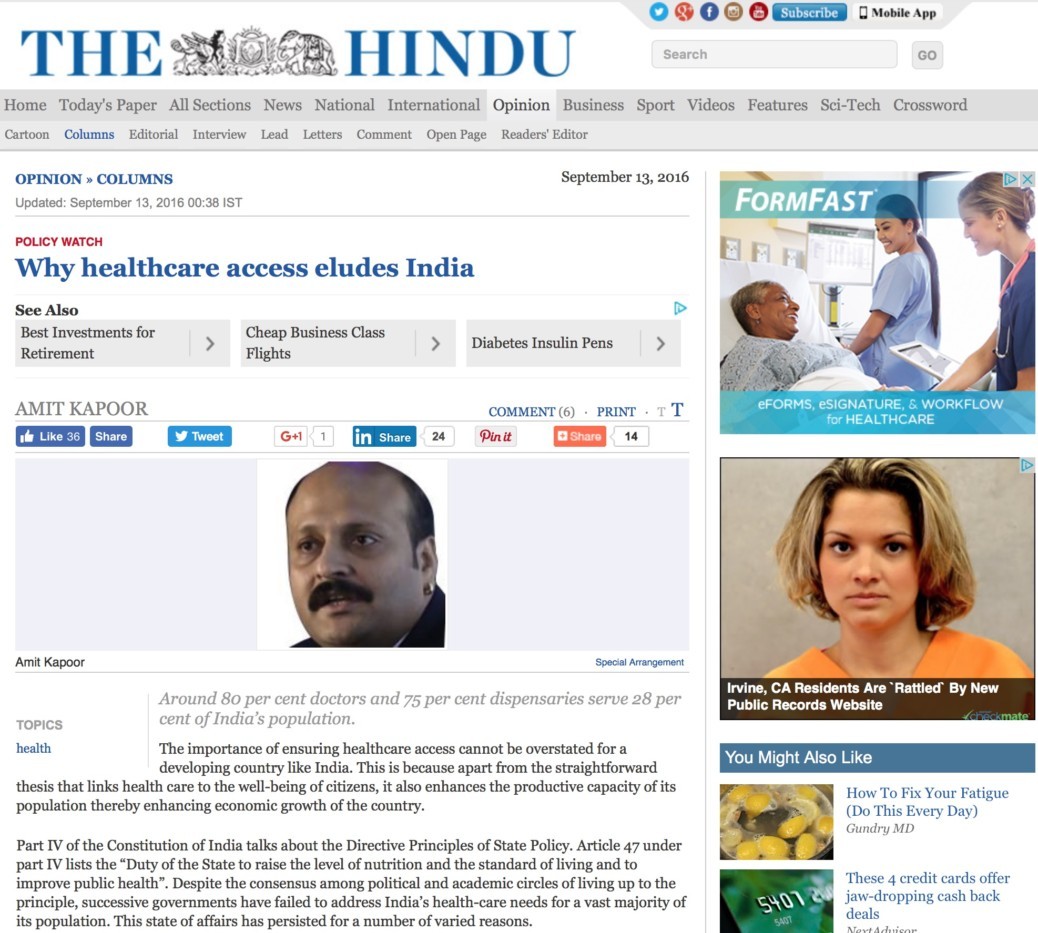 The importance of ensuring healthcare access cannot be overstated for a developing country like India. This is because apart from the straightforward thesis that links healthcare to the wellbeing of citizens, it also enhances the productive capacity of its population thereby enhancing economic growth of the country.

Part IV of the Constitution of India talks about the directive principles of state policy.  Article 47 under part IV of the Constitution of India lists the ‘Duty of the State to raise the level of nutrition and the standard of living and to improve public health’. Despite the consensus among political and academic circles of living up to the principle, successive governments have failed to address India’s healthcare needs for a vast majority of its population. These state of affairs have persisted for a number of varied reasons.

First, India’s healthcare infrastructure is largely inadequate to serve its vast population. To begin with, the total number of hospitals and healthcare professionals, public and private included, fall short of addressing the total demand for healthcare services, despite being large in numbers.  According to the latest KPMG report, around 80% doctors and 75% dispensaries serve 28% of the country’s population. Also, the focus of policymakers has been to address the demand-side issues rather than addressing the supply-side inefficiencies. This is evidenced by the focus on improving hygiene and environmental concerns to prevent the spread of ailments and diseases. Although commendable, these efforts have failed to match demand with supply.

Second, dismal healthcare expenditure has aggravated the inadequacy of its healthcare infrastructure. India accounts for over 17% of the world’s population while spending less than 1% of the world’s total health expenditure.  Our total healthcare expenditure stands at 4.1% of GDP, which is among the lowest in the world. The way these funds are disbursed to the states and utilized add to the problems. There is usually a considerable delay of funds disbursed for utilization in critical government schemes rendering them ineffective. Moreover, the funds allocated for skill building of healthcare professionals are usually not utilized owing to lack of such human resources.

Third, problems of governance deficit and regulatory capture arise due to myriad laws and regulations, which impede the normal development of this sector. A large number of institutions and healthcare providers like doctors, equipment manufacturers, drug companies, and hospitals are not formally recognized by the state due to a host of laws and regulations. This has inhibited access to healthcare, and it is important to see how this can be improved, and more effective healthcare is provided to a larger number of people. The inefficiency in the sector also creeps up with the widespread corruption that ails both the public and the private sector.

Finally, the lack of awareness and monitoring of diseases as well as the steps needed to eradicate them pose a serious challenge to the healthcare problem. The success of polio eradication from the country provides a case in point. It was a result of incessant awareness campaigns and active participation of all stakeholders from healthcare providers to the beneficiaries supplemented by strict monitoring by the government. This kind of holistic approach is required for tackling the large number of diseases that still exist in India and are proliferating its vulnerable population. India remains one of the few countries where both communicable and non-communicable diseases are so largely prevalent. The changing disease patterns pose another serious challenge to the healthcare sector and finding innovative drugs that can cure a large number of diseases should remain a priority.

India requires an urgently integrated action on healthcare to make it universally accessible and affordable at the same time. This will not just address the country’s health needs, but also have a positive impact on its poverty and growth levels. Professor Amartya Sen has repeatedly argued for the same. He has been critical of the suggestion that countries should grow economically first and then invest in their social sector later. Comparing India and China’s growth rates, he argues that the main reason for the latter’s explosive growth cannot be attributed to the nature of its government, but to its higher investment in health and education. Similarly, Japan’s rapid growth since the second decade of the 20th century can be understood in light of the higher investment in health and education after the Meiji restoration. India needs to follow a similar strategy to make its citizens more competitive and act as an asset to the country’s growth.