India and the Elusive Demographic Dividend 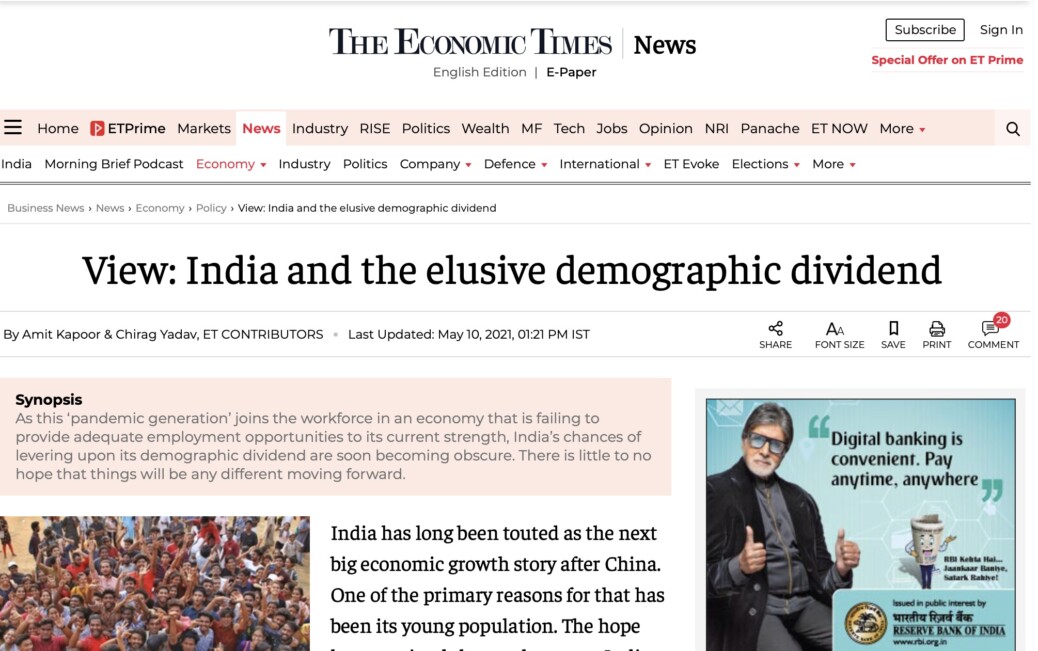 India and the Elusive Demographic Dividend

India has long been touted as the next big economic growth story after China. One of the primary reasons for that has been its young population. The hope has remained that as the young Indian population enters the working age, it will lead to higher economic growth – a demographic dividend. The window began in 2018 when the working age population began to grow larger than its dependent population – children aged 14 years or below and people above 65 years of age. It is expected to last for 37 years until 2055. But will India manage to gain through this bulging working population?

The link between population changes and economic growth has been a long-standing curiosity. It can be traced back to Thomas Malthus’ infamous treatise from 1798 where he argued that human population had a tendency to outstrip all possible means of subsistence, which keeps the world eternally trapped in poverty. Thus, human population and economic growth were tied in a zero-sum game limited by the availability of food. This observation was true in the world around Malthus as it was constrained by the fixed resources for growing food and slow technological progress.

But recent history has proved Malthus wrong. Since the end of the Second World War, global population has more than doubled and the per capita GDP of the world has risen by over five times. The rapid technological progress in the post-Malthusian world has made population an asset rather than a burden.

Many Asian economies – including Japan, South Korea, and China – were able to benefit from the rise in their working population. This has been possible in the modern world due to fall in fertility rates through contraceptive usage and increase in life expectancy through scientific advancements in modern medicine. And these Asian economies managed to engage their population in productive employment, which enabled sustained periods of high growth. So, the expectations from India have been immense to reap similar demographic dividends.

But the mere existence of technology in the modern world is not sufficient to overcome the Malthusian trap. There are two further prerequisites: ample availability of productive employment and the capability to make use of available technologies. India is lacking on both fronts.

Even before the COVID-19 pandemic hit, unemployment levels in India had hit a 45-year high. As of 2017-18, only half of the people in the working age were actually working. In 2004-05, the same proportion was 63.7 percent. Moreover, the troubled scenario of education and skills is evident from the Pratham surveys that are released each year. In 2018, it showed that just half of the children in the 5th standard could read a text from the 2nd standard.

The pandemic has worsened the situation. The latest State of India’s Environment report released by the Centre for Science and Environment finds that an astounding 375 million children may suffer long-lasting impacts due to the pandemic including being underweight and stunted, which will lead to losses in education and economic productivity. Government programmes like mid-day meal schemes, which encouraged school enrolment have taken a hit during the pandemic. Even those students who managed to remain enrolled have face difficulties in accessing education due to the vast digital divides across income groups.

As this ‘pandemic generation’ joins the workforce in an economy that is failing to provide adequate employment opportunities to its current strength, India’s chances of levering upon its demographic dividend are soon becoming obscure. There is little to no hope that things will be any different moving forward. The possibility of India falling into a ‘middle-income trap’ are higher than the chances of reaping a demographic dividend. Countries fall into a ‘middle-income trap’ because they easily escape abject poverty in early stages of development through simple mobilization of labour and capital. But once these gains are made, a different level of institutional quality is required. As the economy matures, the need for complex contracts, smooth enforcement, and effective regulation are needed. If institutional capacity is weak to enable these processes, growth stalls.

India has failed to strengthen the foundations of state institutions. In 2017, Lant Pritchett and other researchers at the Harvard Kennedy School made an assessment of state capability from 1996 to 2012 for 102 countries. They found that the state capability in India had worsened over that period. Their study implied that countries like India are stuck in a “capability trap” where they know the destination and the route needed to be taken but lack the ability to implement the strategy to do so.

The repercussions of the second wave of the COVID-19 pandemic showcase this inability in the most unfortunate manner. Pages after pages have been filled on what India needs to do over the last few decades in the hope of benefiting from its demographic dividend when the moment arrives. The moment is here, and the country is nowhere near shifting its economic trajectory. Malthus’ pessimism with population seems to be more appropriate today than any demographic optimism.

The article was published with Economic Times May 10, 2021