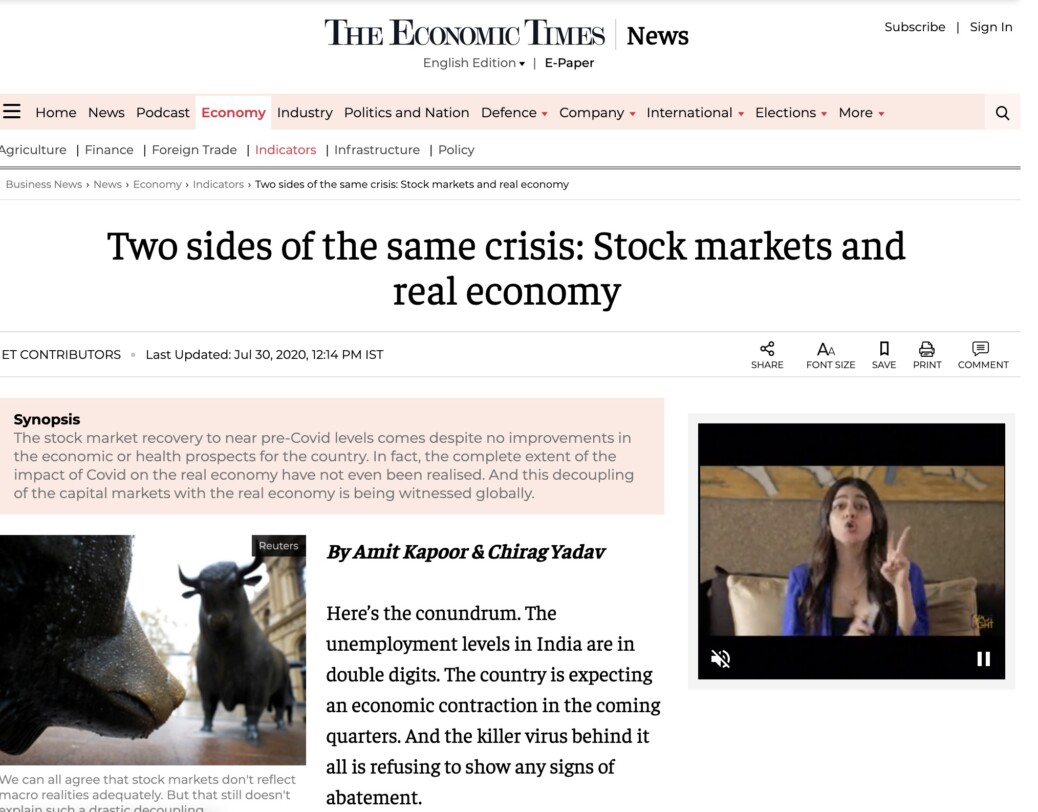 Here’s the conundrum. The unemployment levels in India are in double digits. The country is expecting an economic contraction in the coming quarters. And the killer virus behind it all is refusing to show any signs of abatement.

Yet the stock markets bear no reflections of the real economy.

The Sensex, which is a market index of India’s 30 well-established companies, touched an all-time high of 42,273 on the 20th of January this year. At the time, the virus was only centred around China and the World Health Organization had not declared coronavirus a public health emergency. Then the virus rapidly spread around the world seemingly missing India at first. From its January peak till the day Honourable Prime Minister Narendra Modi announced a nation-wide lockdown on March 24, the Sensex dropped about 40 percent to a low of 25,638. However, in over four months since then, the markets have recovered by over 50 percent to over 38,000.

The stock market recovery to near pre-COVID levels comes despite no improvements in the economic or health prospects for the country. In fact, the complete extent of the impact of COVID on the real economy have not even been realised. And this decoupling of the capital markets with the real economy is being witnessed globally. The US stock markets that had initially dropped by about 34 percent between mid-February and March, have recovered by over 43 percent since then. This has occurred despite the US officially entering a recession in February for the first time since the Great Depression.

Clearly, stock markets are not a reflection of the economic situation by any standards. But the pace of recovery this time has been astounding. Even in the 2008 crisis, the Indian stock markets took an entire year to reach pre-crisis levels.

What could explain this anomaly? One explanation could be behavioural, and another could be macroeconomic. The exact drivers and their extent might need further research.

The behavioural aspect of the trend has been recently outlined by Robert Shiller based on his work on how narratives shape economic outcomes. Shiller argues that the initial market resilience in US until mid-February was the lack of familiarity of investors with pandemics as the event had no historical precedent. Moreover, investors had not anticipated the global spread of the disease and the halting of economic activity in response to it at the scale in which we have seen. The following dip was driven by the stories emerging from China and Italy of hospitals having to choose patients and stores running out of essentials. But eventually, when the government swept into action to provide aggressive stimulus, investors found themselves in familiar territory of previous economic crises. The state-led actions reinforced investor belief to return to the markets, which have staged a prompt and promising recovery.

But Shiller’s explanation fails to fully explain the disconnect between capital and real markets over the long run. The idea of narratives might explain the stock market recovery in response to state actions during the coronavirus pandemic, but these trends are slowly developing into a norm. India’s quarterly growth rate has been consistently going down since Q4 of FY18. The stock markets have continued to rally during this period. Narratives can hardly hold for so long when the reality does not reflect it.

The macroeconomic explanation provides a more generalised contextualisation. A prominent change over the last decade has been the excessive liquidity infusion in the global markets driven by the quantitative easing in the developed world, especially US, where interest rates have reached near zero levels. Most of this money has found its way into capital markets for easy returns instead of materialising as real investments. A lot of the money has also flown into the capital markets of developing countries like India. Investors also know that the central banks and government will back their capital with taxpayer money in case of market failure. Thus, capital markets have begun to provide faster and more secure returns than real investments.

This might not be the only factor driving the mysterious decoupling of the global capital markets from the real economy but a major one. And the implications of this trend are quite grave for societal development. It shows that only the capital owners will get the maximum bang for the buck in the modern global economy. Moreover, speculative assets like stocks and bonds provide higher returns than real capital assets like factories and machines. Going further down this path will reduce avenues of employment in the global economy as more and more capital is diverted to unproductive investments. Such outcomes will have serious implications for poverty and inequality across global economies in the long run. It is, thus, vital for countries to examine why the stock markets are not reflecting the economic situation at the ground level and what it means for the future of human development.

The article was published with Economic Times on July 30, 2020.