Towards creating a healthier and more productive India 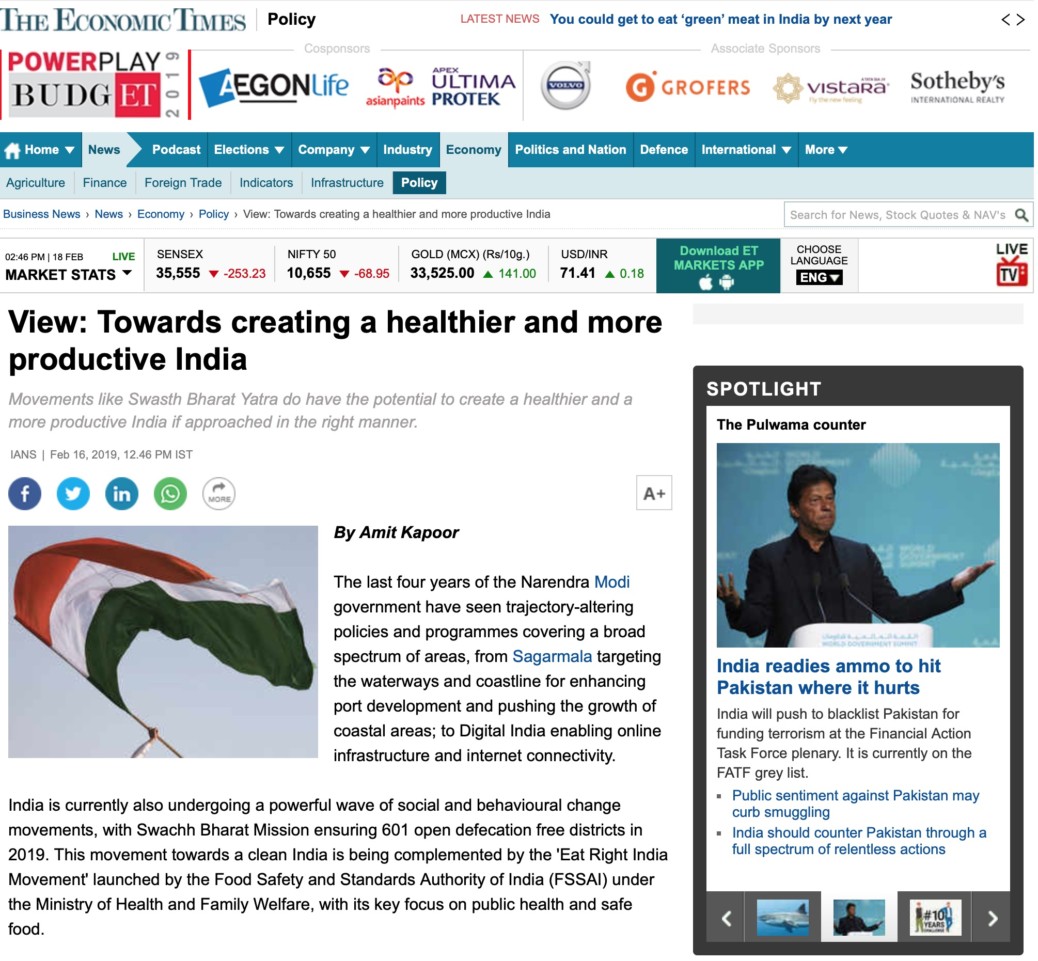 Towards creating a healthier and more productive India

The last four years of the Narendra Modi government have seen trajectory-altering policies and programmes covering a broad spectrum of areas, from Sagarmala targeting the waterways and coastline for enhancing port development and pushing the growth of coastal areas; to Digital India enabling online infrastructure and internet connectivity.

India is currently also undergoing a powerful wave of social and behavioural change movements, with Swachh Bharat Mission ensuring 601 open defecation free districts in 2019. This movement towards a clean India is being complemented by the ‘Eat Right India Movement’ launched by the Food Safety and Standards Authority of India (FSSAI) under the Ministry of Health and Family Welfare, with its key focus on public health and safe food.

India stands at a very crucial juncture wherein it is under the rising burden of non-communicable diseases (NCDs), with the prevalence of diabetes increased to 65 million in 2016, as per a Lancet Study.

Not only is India experiencing severe concerns of NCDs, arising out of poor diets and bad food habits, but the nation remains critical in terms of incidences of food-borne diseases, under-nutrition and micro-nutrition. In 2017, one of the major contributors to concerns of morbidity due to communicable diseases was acute diarrhoeal diseases (22 per cent).

As is visible, India’s status of health due to food-related concerns is alarming and that is why the Eat Right India movement comes as a refreshing change. The movement started off with a nation-wide campaign to reduce the intake of high salt, fat and sugar by creating a catchy ‘Aaj se Thoda kam’ tagline and to ensure food safety.

However, it is important to be wary of the fact that the problem of poor diets, bad eating habits and unsafe food remains a deeply entrenched problem across the nation, wherein a simple policy or programme would not meet the magnitude of the concern. A nation as diverse and expansive as India also continues to battle barriers of percolation of awareness to the bottom and lacks streamlined messages to alter the basic food habits. The regulations can ensure the supply of safe food, but how will the consumer demand safe food or choose food habits that are aligned with rising concerns of public health in the nation? By being aware.

This movement has attempted to resolve the demand side of food safety and public health by carrying out a nation-wide “Swasth Bharat Yatra”, the world’s biggest cyclothon for nudging the majority of the population to eat right. India, being a diverse nation with a population of 122.64 crore, there is a pertinent challenge for any movement to create a sustainable social impact.

This Yatra has had its fair share of success by covering about 20,000 km and ensuring an outreach of 2.5 crore people. The movement has had a meticulous approach in creating awareness which has involved stakeholder engagements, from poster competitions for children to Eat Right Awards for budding food businesses. The Yatra, which had been spread across a period of 100 days and ended on January 29 in New Delhi, has the potential to be scalable and replicable!

However, to throw caution to the winds, it is vital to remember that such behavioural change movements do not come with a guarantee and it is important to keep the momentum going to create a lasting social impact. So, even though the Swasth Bharat Yatra has had the buzz going on for eating safe, right and fortified, there is still a dire need to keep the pace going — to continue carrying out of such activities and events to magnify the awareness and spread the message of eating right across the nation.

A model of social and behavioural movement is not always sustainable; therefore, it is important to take into consideration that for a movement of such magnitude, the government would not be sufficient in itself and will need to enter into collaborations and partnerships.

The social impact that has been created will hold value if and only if such events are made annual, and there is devolution of responsibility to states and district food authorities to continue with the on-ground inclusive and engaging activities. Once the model is strengthened via devolution of responsibility and regularity of events, it can become a benchmark for other matters of public interest that indeed require behavioural change as a key factor for creating social and economic impact.

Such movements also need to be compatible with the nation’s socio-economic challenges, and the differing cultural, regional, social and economic challenges within the nation. Here, it is also important to see that a commercial marketing approach might crumble the potential of the movement, and a ‘social marketing’ approach should be adopted, since it affects not only the individuals but the society as a whole.

Therefore, social and behavioural movements like Swasth Bharat Yatra do have the potential to create a healthier and a more productive India if approached in the right manner!