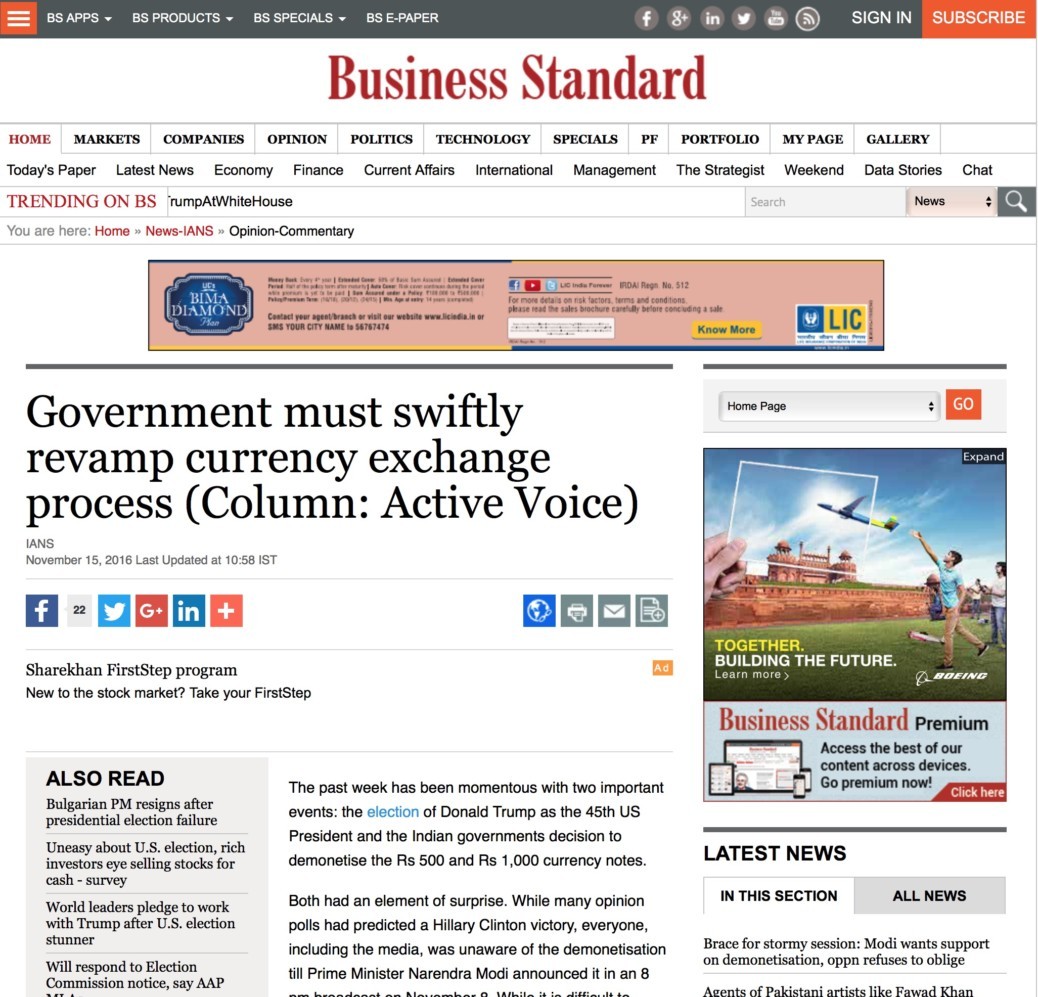 The past week has been momentous with two important events: the election of Donald Trump as the 45th US President and the Indian governments decision to demonetise the Rs 500 and Rs 1,000 currency notes.

Both had an element of surprise. While many opinion polls had predicted a Hillary Clinton victory, everyone, including the media, was unaware of the demonetisation till Prime Minister Narendra Modi announced it in an 8 pm broadcast on November 8. While it is difficult to predict what a Trump presidency might look like, it is relatively easier to foresee the impact of the demonetisaion. This was previously resorted to in 1946 and 1978, but it is for the first time that a move of this magnitude has been undertaken where approximately 86 percent of the currency in the two denominations became defunct overnight.

These are four broad areas where the impact is expected: the economy; politics and the security situation; the housing market and black money hoarders; and the common people.

However, the propensity to spend may decrease in the short- to medium-term. Barring this, much of the money is going to be flushed out of the system. People with genuine money are rushing to banks to exchange this, leading to parking of funds with the banking sector. Already about Rs 1.5-2 trillion has been deposited out of the total Rs 17.3 trillion of the cash, out of which over Rs 14 trillion is in demonetised denominations.

Another important impact is on the informal component of the economy, which is now slowly turning to banks to replace currency. This is expected to again be used for assessments of the size of this component in the economy. Also, as the government decides to tax unreported money above Rs 2.5 lakh there is bound to be a rise in tax revenues.

The stock markets have already seen a decline due to the sudden move as well as due to the Trump ascendancy.

The second important impact is on politics and the security situation. With the assembly elections in 12 states in 2017-2018, the biggest of them being Uttar Pradesh, with a population equivalent to Brazil, the impact could be considerable.

There have been statements from political parties of all hues on how the move is anti-common man. The Trinamool Congress, the Congress, the Samajwadi Party and the Left parties have all tried to question the government’s move. While there is merit in questioning how this could have been done better, asking too many questions raises the risk of these parties being perceived as corrupt.

The nature of demonetisation demanded it be kept secret, as otherwise people with ill-gotten money could have exchanged their cash for assets such as gold and other metals. The three-and-a-half-hour timeframe saw investments by people to get gold and the like. However, the Income Tax Department is now looking at these carefully. Despite this, the impact of the decision has signaled a move to remove funding, which could have been used for gaining power.

Apart from this, the move also has important implications for the security dimension with it having removed counterfeit currency that could have been used for fuelling terror and Maoist operations. However, these are small-term impacts and counterfeit currency can again appear in the future. Modi has signaled that there is more to come in his resolve to solve the corruption conundrum.

The third important element is with respect to the housing market, and black marketers and hoarders. The housing market is set to see a decline in prices as the stock of cash is removed from the system. Also, the 60:40 rule, which seemed to be the de facto norm, will most likely change as there will be a move away from cash. This will also reduce the size of the overall parallel economy.

There are reports of some counterfeit currency having been burnt as these cannot be taken to the banks for exchange. Rumour-mongering is rife at the moment with prices of items such as salt rising. However, it must be said that such rumour-mongering is at best avoidable and not to be believed.

Finally, the impact on people has been huge. Common people have been queuing at the banks for exchanging their notes and withdrawing their currency in smaller denominations. The impact can be felt on all sections of society with the poor being badly hit. The rich and a majority of middle class can pay through cards but the poor have little option. Another important facet is the urban versus rural consumers. While the urban folk will somehow be able to avail of goods and services, the rural folk being away from banking system, will find it relatively difficult to exchange their notes till December 30. The pain for most people is real, but it is time to behave humanely with those in need. Finally, the move shows a preference away from cash to a cashless economy.

The impact of these two events can only be judged completely in due course of time. However, for the time being, the government should make provisions for swift revamping of the currency exchange process as well as recalibration of ATMs for life to return to normal for the common folk. The decision has been bold and risky and it is time for the implementation agencies and citizens to work together to improve the efficiency with which this can be done.

Published in Business Standard on November 14, 2016. To know more