Tackling the Inevitable: The Need for New Economic Ideas in the Time of Coronavirus

Home Tackling the Inevitable: The Need for New Economic Ideas in the Time of Coronavirus 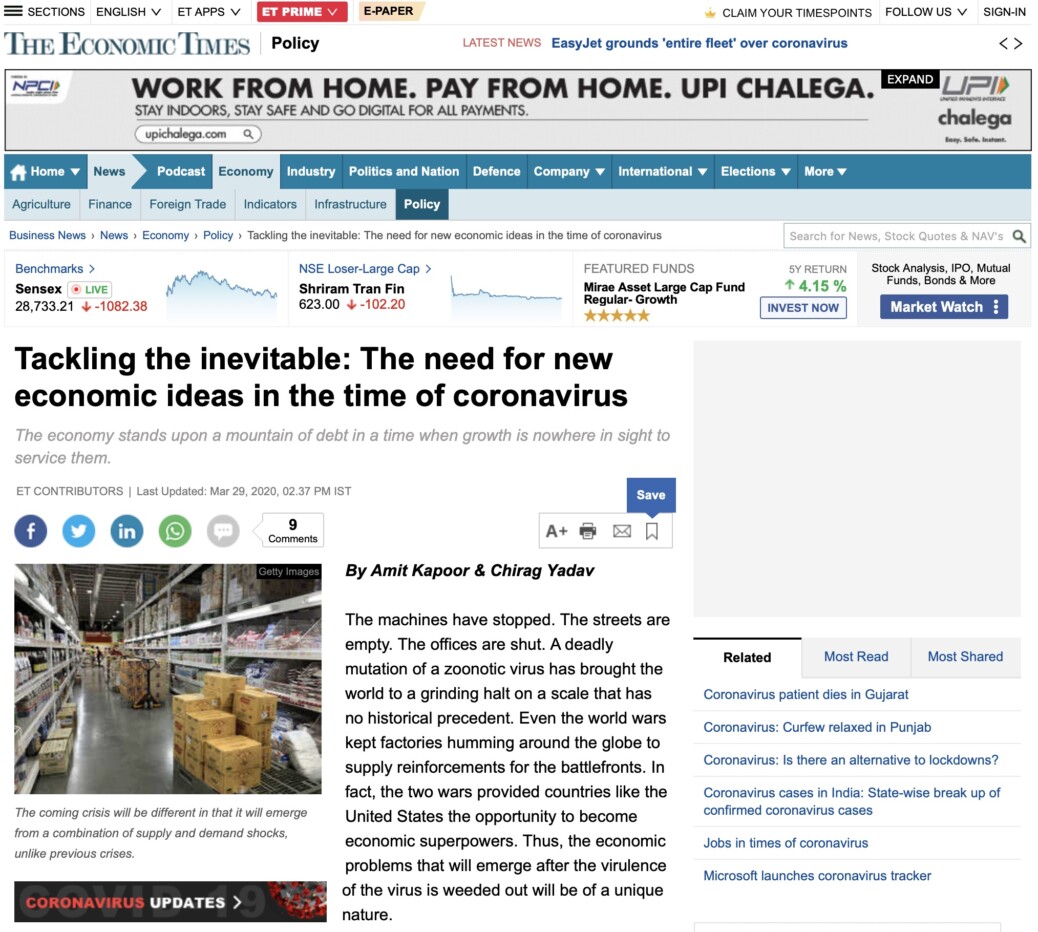 Tackling the Inevitable: The Need for New Economic Ideas in the Time of Coronavirus

The machines have stopped. The streets are empty. The offices are shut. A deadly mutation of a zoonotic virus has brought the world to a grinding halt on a scale that has no historical precedent. Even the world wars kept factories humming around the globe to supply reinforcements for the battlefronts. In fact, the two wars provided countries like the United States the opportunity to become economic superpowers. Thus, the economic problems that will emerge after the virulence of the virus is weeded out will be of a unique nature.

The ensuing economic crisis in the aftermath of the coronavirus will also be different in the sense that it will emerge from a combination of a supply as well as a demand shock unlike previous crises in recent past. On the supply side there is a sudden disruption in the availability of labour due to the lockdowns and quarantines that have been put into place in almost all countries around the world. Moreover, since supply chains have been disrupted, firms have lost access to suppliers for the inputs, which are crucial for production. On the demand side, the loss of income during this period and the rise in uncertainty will disincentivise people from spending. Both these dampening forces in action are bound to render the world into a full-blown recession that was long coming.

Before the “black swan” event of the virus came along, the signs were there for an impending crisis. As the World Bank had noted in December 2019, the world economy has been witnessing a steady build up of debt over the last decade that could be seen as the fourth wave of debt accumulation in the last fifty years. The three debt waves before the current one had all culminated in a financial crisis across the world or in major parts of it.

The first wave occurred in the crisis-ridden decade of the 1970s when developing economies in the Latin America and the low-income economies of sub-Saharan Africa borrowed heavily due to low real interest rates throughout the decade. When the interest rates finally began to rise, the countries were left with no option but to default on their repayments. A second wave of debt accumulation began when interest rates were low in the 1990s, which eventually resulted in the Asian financial crisis of 1997. The third wave impacted the developed world as well. With regulatory easing, the private sector borrowing accelerated in the new millennium, which led to a collapse of the banking system in 2007-08 and the biggest recession in recent past.

The most recent wave of debt accumulation began in 2010 and has witnessed the most rapid and largest increase in debt among the emerging markets and developing economies in the last five decades. As of 2018, the global debt stands at an all-time high of 230 percent of global GDP. The total debt for the developing countries in the same year was almost equal to twice their combined GDP – the highest ever. So, an economic crisis has long been in the making. The question was when. But the sudden shock in global production from the coronavirus has accelerated the timeline for the world.

India will be no stranger to the impending crisis. The country has spent a majority of the previous decade dealing with the overleveraged positions of its businesses and banks that had not been able to recover from the post-2008 slowdown. The growth scenario was also in doldrums in the months leading up to 2020. India’s growth had been falling for six consecutive quarters until the second quarter of the current financial year when it clocked 4.5 percent – a six year low. The figure was only marginally beginning to improve in the third quarter (4.7 percent). But the final quarter is bound to have poorer growth outcomes. The continuous fall in growth numbers – although worrisome in themselves – has also limited the capacity of the government to stimulate the economy once the situation returns to normalcy.

Thus, once the health emergency is addressed, the world will be left to deal with the inevitable economic threat. The global economy stands upon a mountain of debt in a time when economic growth is nowhere in sight to service them. Innovative solutions will be required to extricate the world out of the crisis. The 2008 crisis was managed owing to the high-growth years that had preceded it. The world economy does not have the same luxury this time. For starters, countries could agree upon a coordinated debt-resolution strategy that staggers repayment over a period of time in the future. But the scope and viability of such ideas need be chalked out while there is still time for the global economies to arrive at a common understanding. These are strange times and the world needs stranger ideas to overcome them.

The article was published with Economic Times on March 29, 2020.