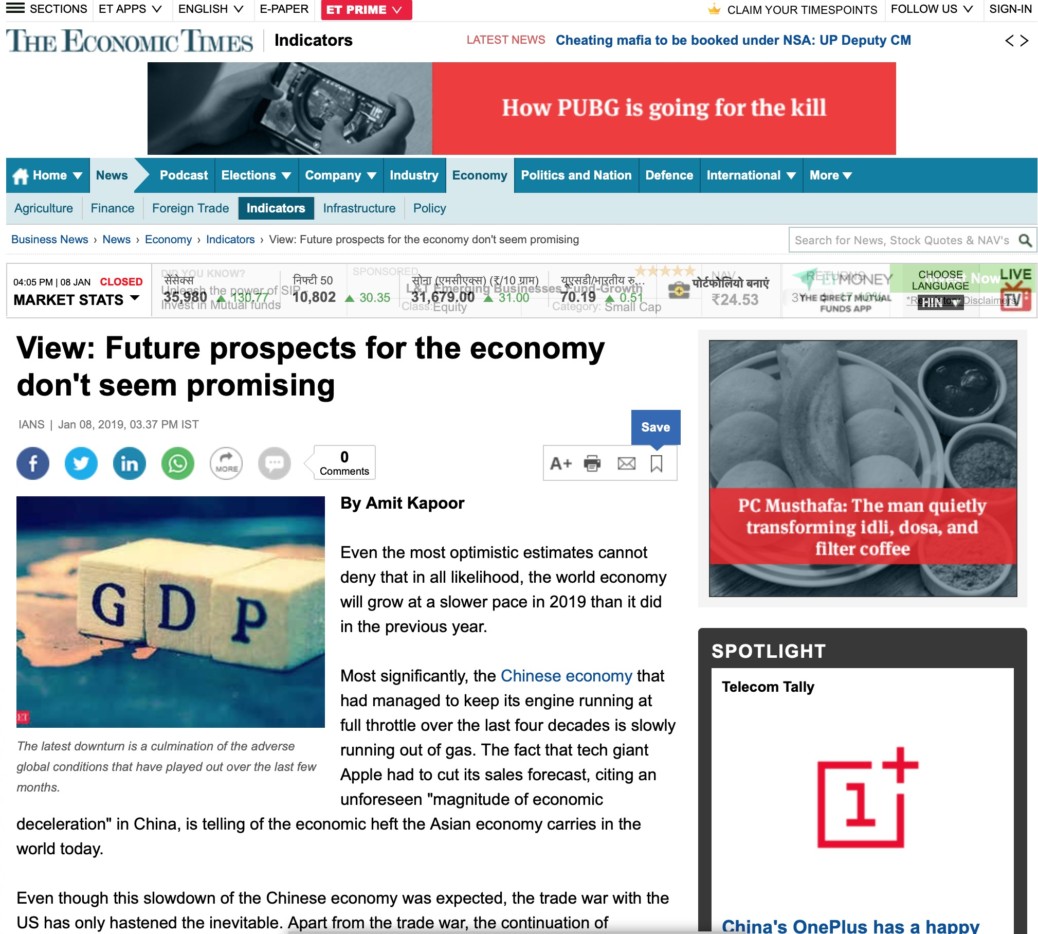 Even the most optimistic estimates cannot deny that in all likelihood, the world economy will grow at a slower pace in 2019 than it did in the previous year.

Most significantly, the Chinese economy that had managed to keep its engine running at full throttle over the last four decades is slowly running out of gas. The fact that tech giant Apple had to cut its sales forecast citing an unforeseen “magnitude of economic deceleration” in China is telling of the economic heft the Asian economy carries in the world today.

Even though this slowdown of the Chinese economy was expected, the trade war with the US has only hastened the inevitable. Apart from the trade war, the continuation of monetary tightening by the world’s largest economies will only add to the misery.

Amidst such bleak global prospects, the Indian economy has been reeling under its own share of problems.

The economy was surging at 8.2 percent in the quarter ended June 2018 – the fastest rate for any major economy in the world. Even though India still carries that distinction, the growth rate slowed down towards the end of the year to 7.1 percent. Government data released on Monday put at growth rate at 7.2 per cent in 2018-19. Investments have also taken a hit. As per data from the Centre for Monitoring Indian Economy (CMIE), investments into new projects in the last three months of 2018 was at its lowest level since the BJP came into power in 2014. The value of stalled projects has also risen to the second highest in the tenure of the current government.

The latest downturn is a culmination of the adverse global conditions that have played out over the last few months. A sudden spike in crude oil prices had sent the Indian currency in a freefall, widening the current account deficit and dampening growth. Only a reversal in oil price trends proved to be a saving grace for the Indian economy. The series of events were a rude reminder of the dependence of the health of the Indian economy on the price of oil.

A higher price of oil was a leading cause of the dismal economic scenario in the final years of UPA-II and its sustained downward revision explained the economy’s improved performance during a majority of the current government’s tenure. As per IMF estimates, the windfall gains to the Indian economy from a fall in crude oil prices were a cumulative 4 percent of GDP in 2015 and 2016.

Therefore, oil price trends will also have a strong bearing on India’s economic performance in 2019. The price will probably remain subdued owing to the slowdown in the global economy, but the oil cartel, Organisation of the Petroleum Exporting Countries (OPEC) is a wild card. Even though the dominance of Russia and US has grown in the global oil markets, OPEC still wields a significant influence. So, the volatility in oil prices owing to OPEC’s production cuts will be a major challenge in the coming year.

Another aspect that will play a defining role in the performance of the economy is the oncoming elections in May. As is the wont of the political class in India, the government is expected to boost spending in the months leading up to the election, especially towards the farming community, to garner voter support for the ruling party. Conversations around farm loan waivers have already picked up following the BJP’s disappointing performance in the recent state elections. Such efforts are bound to pressure the state’s fiscal goals, which are already in jeopardy considering the government had already reached its annual budgetary targets in October itself. Even though these moves might result in short-term growth spurts, the impact on the economy’s growth in the second half of the year will depend on the electoral outcomes.

The lending activities of the banks will be another determinant of the revival in economic activity of the country. Banks have become extremely risk-averse in granting loans due to increased scrutiny by the RBI on account of the mounting piles of stressed assets. Hopefully, 2019 will be the year when the problem of bad loans will finally move towards resolution and stop being an impediment to growth.

With a tepid global economic scenario, subdued domestic sentiment, and an election that is bound to bring a coalition government into power, the future prospects for the economy do not seem promising. The successive government is likely to take charge in a less than ideal economic environment and will face significant challenges to infuse stability and stronger growth into the economy. The task is cut out for them.

The article was published with Business Standard, Economic Times on January 8, 2018.