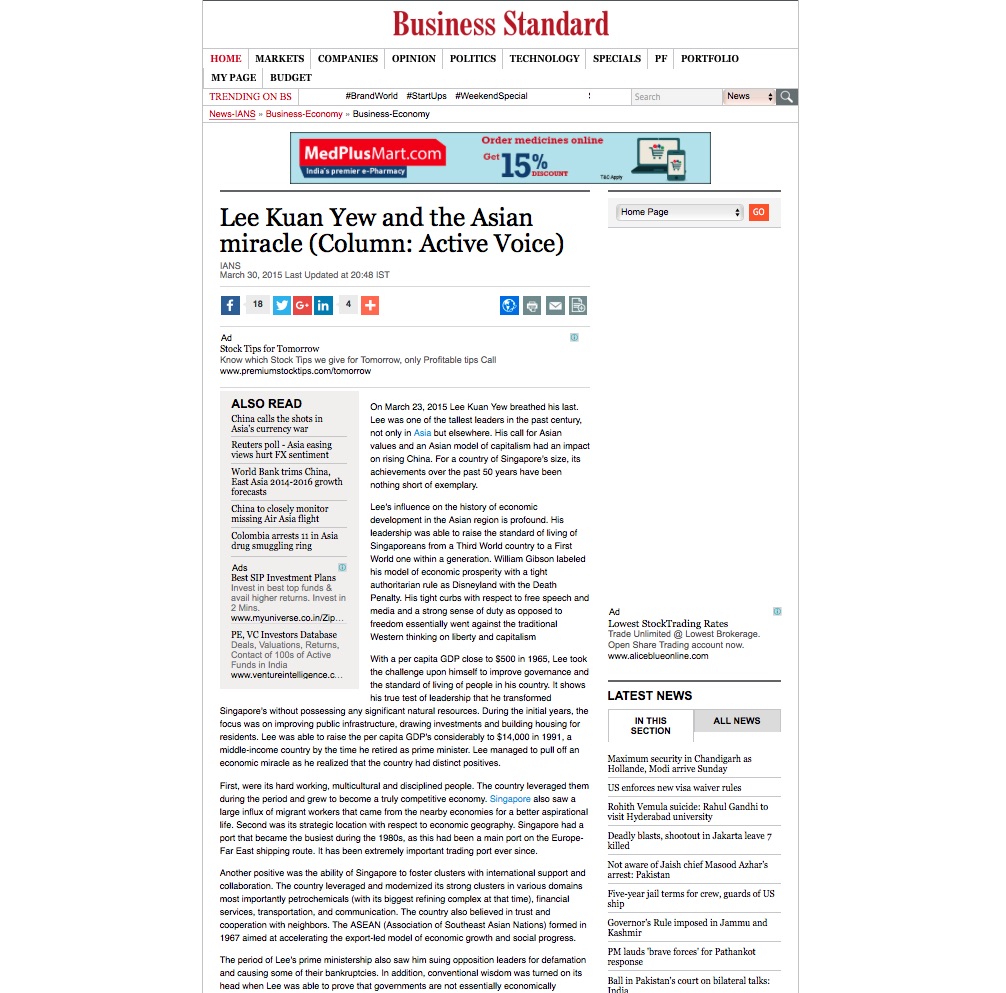 On March 23, 2015 Lee Kuan Yew breathed his last. Lee was one of the tallest leaders in the past century, not only in Asia but elsewhere. His call for Asian values and an Asian model of capitalism had an impact on rising China. For a country of Singapore’s size, its achievements over the past 50 years have been nothing short of exemplary.

Lee’s influence on the history of economic development in the Asian region is profound. His leadership was able to raise the standard of living of Singaporeans from a Third World country to a First World one within a generation. William Gibson labeled his model of economic prosperity with a tight authoritarian rule as Disneyland with the Death Penalty. His tight curbs with respect to free speech and media and a strong sense of duty as opposed to freedom essentially went against the traditional Western thinking on liberty and capitalism

With a per capita GDP close to $500 in 1965, Lee took the challenge upon himself to improve governance and the standard of living of people in his country. It shows his true test of leadership that he transformed Singapore’s without possessing any significant natural resources. During the initial years, the focus was on improving public infrastructure, drawing investments and building housing for residents. Lee was able to raise the per capita GDP’s considerably to $14,000 in 1991, a middle-income country by the time he retired as prime minister. Lee managed to pull off an economic miracle as he realized that the country had distinct positives.

First, were its hard working, multicultural and disciplined people. The country leveraged them during the period and grew to become a truly competitive economy. Singapore also saw a large influx of migrant workers that came from the nearby economies for a better aspirational life. Second was its strategic location with respect to economic geography. Singapore had a port that became the busiest during the 1980s, as this had been a main port on the Europe-Far East shipping route. It has been extremely important trading port ever since.

Another positive was the ability of Singapore to foster clusters with international support and collaboration. The country leveraged and modernized its strong clusters in various domains most importantly petrochemicals (with its biggest refining complex at that time), financial services, transportation, and communication. The country also believed in trust and cooperation with neighbors. The ASEAN (Association of Southeast Asian Nations) formed in 1967 aimed at accelerating the export-led model of economic growth and social progress.

The period of Lee’s prime ministership also saw him suing opposition leaders for defamation and causing some of their bankruptcies. In addition, conventional wisdom was turned on its head when Lee was able to prove that governments are not essentially economically inefficient. Evidence of it was that the government-owned companies were the largest employer by the time Lee vacated his office and accounted for astounding 20 percent of Singapore’s GDP.

Post the 1990s Lee became a ‘senior minister’ in the cabinet and in 2004 became a ‘minister mentor’ but his influence on Singapore and the city state’s rise continued. Lee resigned in 2011 from the government at the age of 87. The country in 2013 had a per capita GDP of $55,000 – better than most of the developed nations. The city-state has been ranked 1st by the Ease of Doing Business Report 2015 by the World Bank group and the 2nd by the Global Competitiveness Report 2014-15 of the World Economic Forum.

Lee’s greatness is that his influence was not just restricted to the domestic sphere, but he was considered to be a great geopolitical strategist. The most prominent of his impact can be seen in the recent Chinese economy. The period post the rise of Deng in China in 1978 has his strong influence. Deng was visibly impressed with Singapore. He is quoted as having said: “Singapore’s social order is good. Its leaders exert strict management. We should learn from their experience, and we should do a better job than they do.” There is much in this India – not necessarily on social order but essentially on nurturing talent, providing better governance, boosting international relations and improving India’s economic performance.

Published in Business Standard on March 30, 2015. To know more