India yet to realise its economic freedom

Home India yet to realise its economic freedom 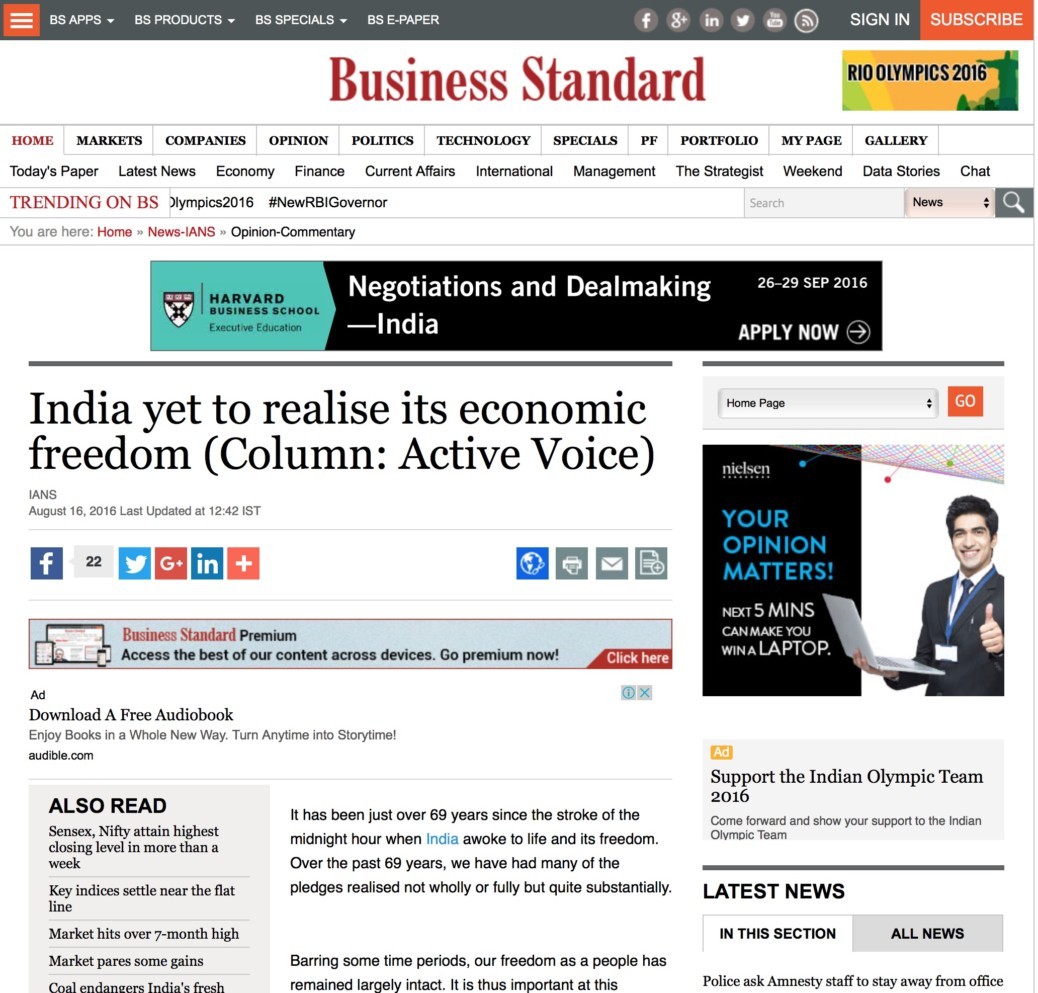 India yet to realise its economic freedom

It has been just over 69 years since the stroke of the midnight hour when India awoke to life and its freedom. Over the past 69 years, we have had many of the pledges realised not wholly or fully but quite substantially.

Barring some time periods, our freedom as a people has remained largely intact. It is thus important at this juncture to look at some critical aspects of what this freedom has come to mean to us — particularly from an economic viewpoint and what has been the role of the state in helping India expand the freedom of its people.

We were, at a recent conference, asked some basic questions on our personal preferences and choices. Since freedom in a fundamental sense is also related to the expansion of our life’s choices for realizing one’s potential we list some of these questions here.

A large number of people were reluctant to take the first two questions and a large proportion of people, to questions three to six, talked about taking private alternatives and the failure of the state.

While one may cite the sample size as well as the sample as a problem (since most of the participants were from the National Capital Region (NCR) and about 60 of us were in the room) these do, to an extent, reflect some basic realities pertaining to choices and preferences which people in India make.

In places where the people are largely taking the public system, it is not due to their choice but the lack of viable and proper private sector alternatives at affordable prices. Now this is not to mean that private sector does not have its own set of problems in India. These include greed and incompetence, like in the healthcare system, which appears to be outside the ambit of most of India’s population, as well as high school fees that people often complain about.

In this fundamental sense, the Indian state has essentially been minimal (a specific term in political philosophy meaning a state performing only the basic function of maintaining law and order) but in a unique sense of being present in most sectors but not performing any duty properly, barring national defence (where India has a well trained and professional human resource pool) but it’s defence production and acquisitions too are less than satisfactory.

The fundamental problem appears to be that of priorities and understanding the role of the state. The basic purpose of a nation state is security. Apart from that, essential elements include providing education and healthcare. Here the private sector in India is propped up, largely as the state system is inadequate, inherently inefficient and slow with resolving problems in primary education. The problems are similar in the public healthcare system.

Post the 1980s, after India gave up the socialist model of development, the state has shrunk and has faced competition from the private sector in these as well as other distinct sectors of the economy. The choice-set for people has expanded — largely not due to the state but in spite of it.

We have more cars to choose from, more pharmaceutical companies, more power producers, more choice with respect to air travel, more choice for banking services including ATMs, more choice for digital and mobile phone connectivity and the like. All these sectors evolved and competition essentially took care of prices as well as quality better than the state was able to.

The role of the state has been restricted to creating the conditions for free and fair competition, which was taken care of by setting up independent regulators. The state has, in that fundamental sense, allowed for its shrinkage and changed its role from providing goods and services to enabling their provision. This is a direction India should be taking ahead in the years to come. This is not to suggest to immediately move out of sectors but to make the state more efficient and accountable in where it is essential and to enable competition in sectors, which can make the system more efficient.

India, in our view, is still to realize its economic freedom as it celebrates its 70th year of independence, which is dependent conceptually on important elements like protection of property rights, voluntary exchange and freedom to compete in markets. We hope in the years ahead, India realizes this economic freedom and enables any citizen to be able to approach the legal system or police without fear and favour. That is the yardstick by which the Indian state should measure its performance and enable India’s true tryst with destiny.

Published in Business Standard on August 16, 2016. To know more