Net Neutrality: What the debate is all about

Home Net Neutrality: What the debate is all about 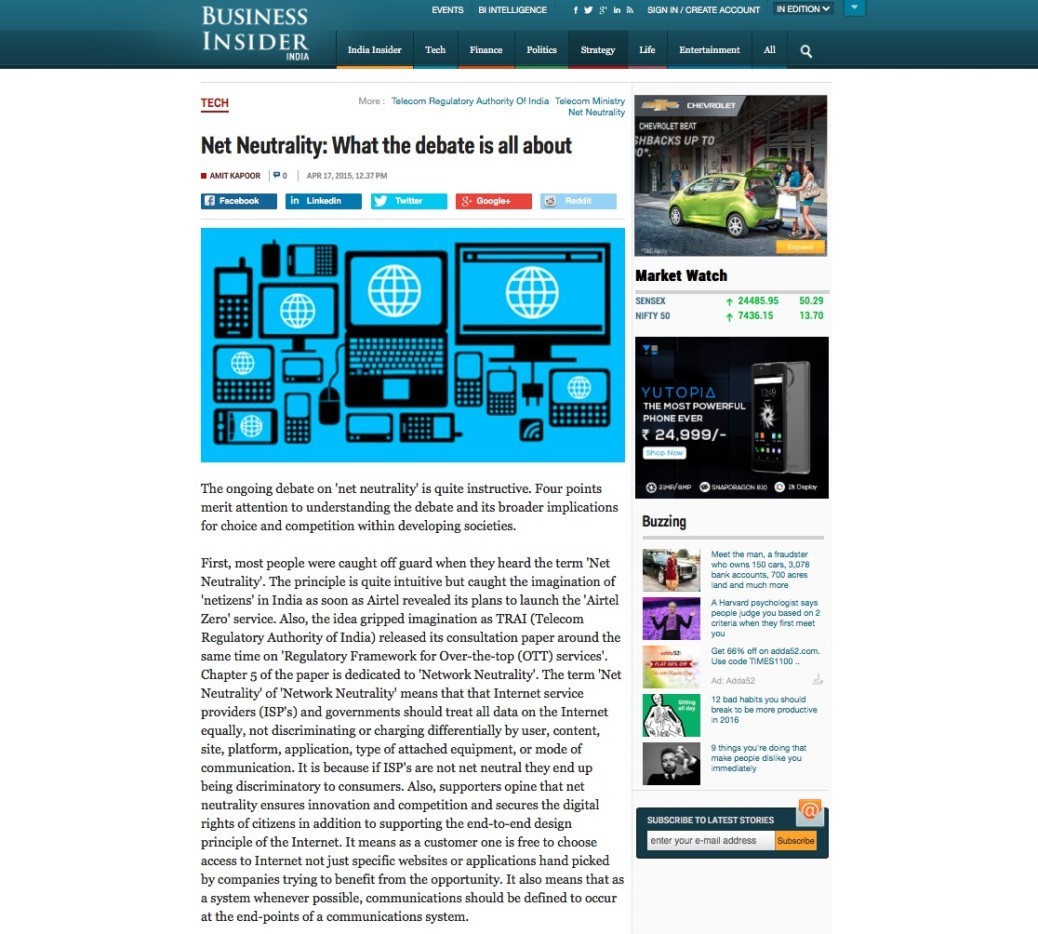 Net Neutrality: What the debate is all about

The ongoing debate on ‘net neutrality’ is quite instructive. Four points merit attention to understanding the debate and its broader implications for choice and competition within developing societies.

First, most people were caught off guard when they heard the term ‘Net Neutrality’. The principle is quite intuitive but caught the imagination of ‘netizens’ in India as soon as Airtel revealed its plans to launch the ‘Airtel Zero’ service. Also, the idea gripped imagination as TRAI (Telecom Regulatory Authority of India) released its consultation paper around the same time on ‘Regulatory Framework for Over-the-top (OTT) services’. Chapter 5 of the paper is dedicated to ‘Network Neutrality’. The term ‘Net Neutrality’ of ‘Network Neutrality’ means that that Internet service providers (ISP’s) and governments should treat all data on the Internet equally, not discriminating or charging differentially by user, content, site, platform, application, type of attached equipment, or mode of communication. It is because if ISP’s are not net neutral they end up being discriminatory to consumers. Also, supporters opine that net neutrality ensures innovation and competition and secures the digital rights of citizens in addition to supporting the end-to-end design principle of the Internet. It means as a customer one is free to choose access to Internet not just specific websites or applications hand picked by companies trying to benefit from the opportunity. It also means that as a system whenever possible, communications should be defined to occur at the end-points of a communications system.

Second, the concept is relatively new. The term was coined by a Columbia Law Professor Tim Wu, in 2003. The debate on this scale (Already over 300,000 emails have been sent to TRAI demanding net neutrality), is happening for the first time in India. In fact, the Facebook and Reliance on India teamed up for discriminatory Internet access with their product ‘Internet.org’ however most netizens did not see it like that that when it was launched in February this year.

Third, large companies providing Internet access is not discriminatory but the fact that they tend to provide access to only a few chosen sites/ applications goes against the democratic principles on which the Internet was founded. Thus, to be a truly universal medium, the access has to be universal rather than selective. However critics of this view say that there are free highways, and there are toll roads. Now free roads have open access but does this mean we restrict access to toll roads simply because it discriminates people that have money for access from the ones that do not. There is a logical counter to this argument as well. First, it is an analogy and Internet access, and highway access are two different things. It is because, selective highway access doesn’t shape your behavior as selective Internet access does. Also, this does not capture the collusive nature of the business that restricts a citizen’s fundamental freedom to choose whatever s/he wants to do on the Internet. Third, it also restricts competition on the Internet from newer players, as these will not have the money to go on the ‘toll road’. So do we, as a result, choose to stifle competition and innovation on the Internet just because somebody had more money to pay for faster delivery?

Fourth, the issue of choice is critical to understanding the debate. As a citizen if the Facebook’s of the world truly want to provide access to information/ Internet why just make certain websites free on the Internet.org, why not invest in providing free access to Internet for all websites? Why only provide access to select sites and applications that are in a business partnership mode like their partnership with the Reliance’s and Airtel’s of the world? Ultimately, network neutrality ensures fair play among the competitors on the Internet on a democratic principle and not because one company has an excess of cash to increase speed of delivery over the Internet. As gatekeepers, ISP’s have a role to ensure that consumer choices are not determined solely by payments made by companies to them for faster data delivery over the Internet.

The Government of India in lieu of the recent debate in India has set up a six-member committee comprising Telecom Ministry officials to examine various aspects of ‘Net Neutrality’. The report of the committee is slated to be submitted on May 9, 2015. The debate on net neutrality is not going to be over any soon. It is because it calls into play the regulation of one of the most creative and fundamental ideas of our time in question- namely the Internet.

Published in Business Insider on April 17, 2015. To know more