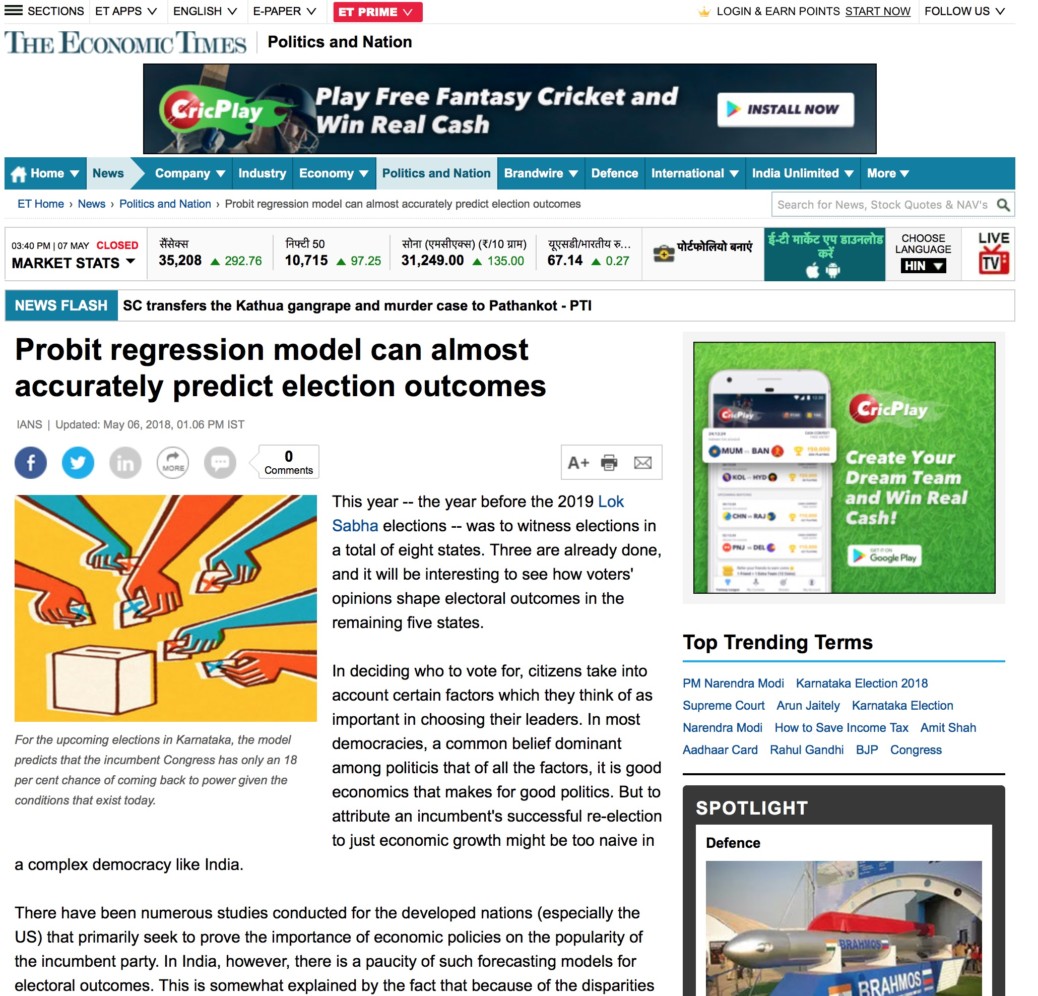 Before India goes in for the 2019 Lok Sabha elections, the year 2018 will witness state elections in as many as 8 states. With elections coming up in the remaining 5 of these states, it is Interesting to see as to how voters’ opinion can shape electoral outcomes and help parties reign in power. In deciding who to vote for citizens take into account certain factors which they think as important in choosing their governing leaders. While in most democracies a common belief dominating politicians is that out of all the factors it is good economics that makes for good politics, attributing an incumbent’s successful re-election to just economic growth might be too natural to believe for a complex democracy like India.

As far as literature is concerned, there have been numerous studies conducted for the developed nations (especially the US)that primarily seek to prove the importance of economic policies on the popularity of the incumbent party. In India, however, there is a paucity of such forecasting models for electoral outcomes. All the work that is best available has focused till now on how the trends over the social media can be used to predict patterns in the voting population. A model that is holistic in its approach to include the economic theory of voting as well the other relevant factors has therefore been missing in our country for long now. This is somewhat explained by the fact that because of disparities that exist within our regions and hence among the citizens living in those regions, it becomes indeed difficult to capture the factors that have a role to play inaffecting their voting behavior. Going forward then, an attempt to developing a comprehensive prediction model of this kind must address two empirical questions at hand. Firstly, whether growth rates based on the economic theory of voting can explain state-level election results in India and secondly, that what are the other measures that voters might be considering in the process of rewarding/penalizing the incumbent party in their State.

The economic theory of voting rests upon the popular notion that the chances of an incumbent party winning elections rise if the region in case experiences positive economic growth during its term of rule. However, in India in 2006 the ruling party DMKin Tamil Nadu lost the elections with a growth number as high as 13%. Even more interestingly, Arunachal Pradesh in 2014 chose to re-elect the Congress party despite its poor show in the state in terms of economic aspects. Moreover, a simplecorrelation analysis shows that there is a negative relationship between the growth rate of GSDP per capita of a state and there-election of the incumbent party implying that in most of thecases higher growth does not lead to the incumbent getting re-elected. This observation then means that our voters while ranking the governing capabilities of different parties consider also a whole lot of factors other than just the economic performance so achieved.

The other factors that might contribute in shaping the voting patterns of our citizens can be (a) the level of social progress in a region, (b) the level of consumer and business confidence on the government at the centre and (c) the level of social media leveraging by political parties. Using a probit regression modelfor the period 2006-2017 with the re-election of the incumbent party as the dependent variable and the rest of the factors as explanatory variables, the success rate of the predictions turns out to be 78%. Perhaps the biggest prediction by way of this model was that the state of Tripura will not be ruled by the Left anymore.

In the model, the social progress in any state is mapped through using the social progress scores from the Social Progress Index, India which is positively related to the prospects of getting re-elected. The index is an integrated measure of the capacity of a society to meet the basic human needs of its citizens, establish the building blocks to allow the citizens to enhance and sustain the quality of their lives and create the conditions for all individuals to reach their full potential. Furthermore, two different indicators are taken to capture the confidence on the central government i.e. the Business Confidence Index by the CII and the Nielson Global Consumer Confidence Index. Lastly, the use of Google trends data (through newspaper articles, television news, or social media platforms) is made to portray the level of interest enjoyed by political parties on the internet medium.

One of the most striking features of this research that has come out is the noteworthy role of media in shaping any political elections in the country. Over the years, there has been no less than a revolution wherein the media platforms are not only just a carrier of information but also an influence over the perceptions of the voters regarding their political leaders. With the advancement of technology, the reach has only amplified. Clearly, since the voters may primarily be guided by the social development measures and not the economic indicators in their area, it is then for the political parties to focus on garnering interest in their favor by working on the real development issues that people face in today’s times.