Here’s how global economy will trend in 2016

Home Here’s how global economy will trend in 2016 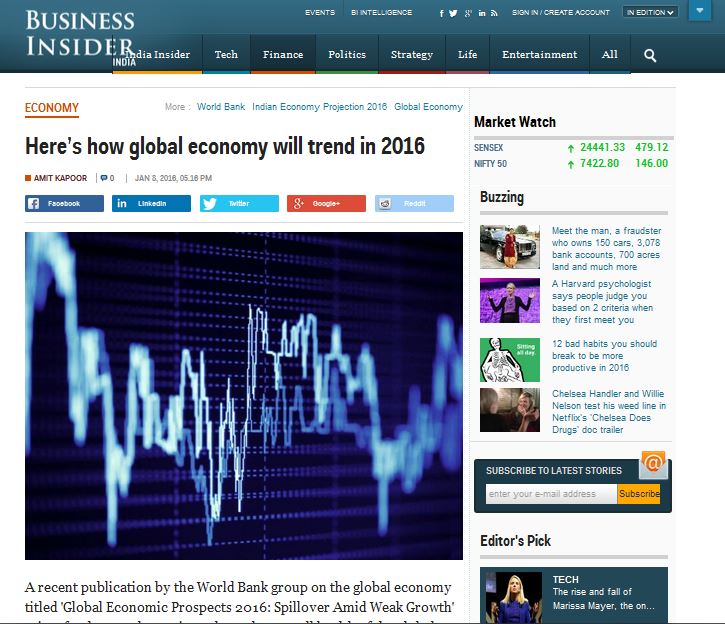 Here’s how global economy will trend in 2016

A recent publication by the World Bank group on the global economy titled ‘Global Economic Prospects 2016: Spillover Amid Weak Growth’ raises fundamental questions about the overall health of the global economy.

The report is particularly timely in the wake of recent jitters in the global stock markets, especially after weak data emerged from China that raised considerable concern in the main markets across the world. The report has an interesting take on developed and developing countries and offers rich insights into the global growth prospects for the year ahead.

Crucial points in the report include:

The year ahead could also see the sluggish movement as the global economy is expected to grow at an estimated 2.9 percent in 2016 and the developing countries are likely to grow at 4.8 percent. Part of the slow growth story has been the sluggish growth in BRICS barring India, which is at present a bright spot in the world economy.

The report takes cognizance of India’s ‘reduced macroeconomic vulnerabilities and domestic policy reforms’. On the other hand, exporters are facing a tough time as China makes a structural transition from investment to a consumption-driven growth model. The report suggests reducing lead times for commodity exporters especially low-income countries to reduce the impacts of the free fall in commodity prices.

Factored into the risk are the tightening measures of the Fed expected in 2016 and geopolitical tensions as well slow growth across developing and developed markets. Barring this, another significant development in the global economy is the weakness in world trade and reduced capital inflows in developing countries.

Thirdly, the report mentions regional outlooks in which the prospects for South Asia and India look upbeat. Monetary and fiscal restraint, the fall in global crude oil prices and resilience of currency and stock markets amid volatility globally have helped India post an impressive 7.2 percent growth y-o-y in the first half of 2015/16.

The main risks mentioned for the region and India are more in the domestic sphere and include stalled reforms particularly in Rajya Sabha and fiscal balance for countries like Bangladesh and Sri Lanka, which have considerable debt.

The report also suggests remedial measures particularly tax reforms and measures to make the region more globally integrated including through trade facilitation, better infrastructure and easing conditions for doing business that will improve the state of the region in the years to come. Added to this is the benefit expected from the states within India that possess the capacity for a demographic dividend.

Fourthly, the report also discusses the impact of the recently concluded 12 countries, Trans- Pacific Partnership and the effect of exchange rate regimes and capital account policies. In the former case, it is estimated that if ratified it could increase the GDP of 12 Pacific Rim member countries by an average of 1.1 percent and increase member countries’ trade by 11 percent by 2030. In the latter case, it is deduced that the countries with fixed exchange rate regimes appear to be more likely to have capital flow restrictions.

Overall the report is a look at what to expect in the future in 2016. As of now South Asia and India seem well poised to remain the fastest growing place in the world. But critical to retaining a position of strength will be domestic reforms in India and maintaining fiscal discipline in its immediate neighbourhood.

Published in Business Insider on January 8, 2016. To know more