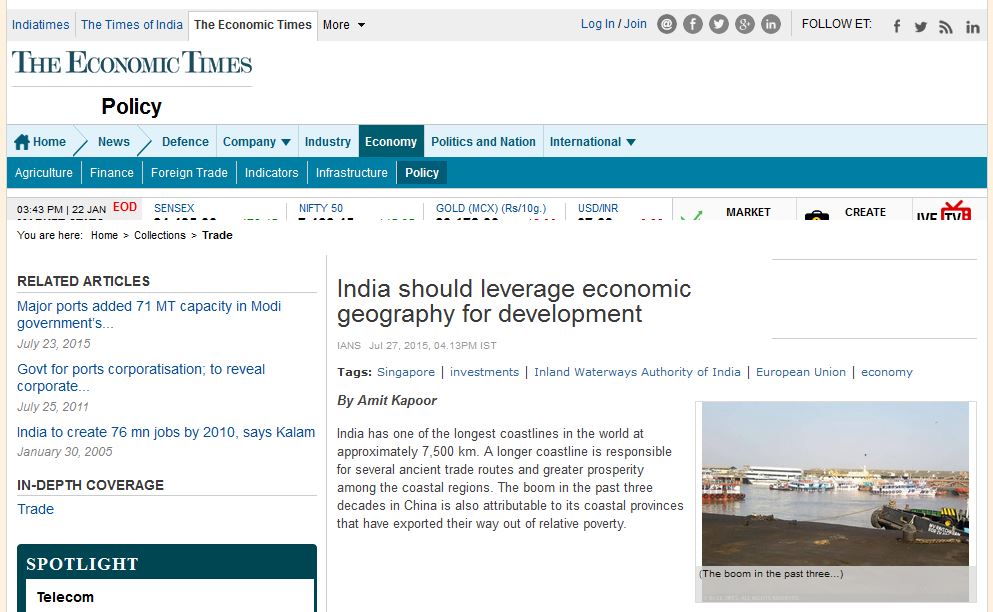 India has one of the longest coastlines in the world at approximately 7,500 km. A longer coastline is responsible for several ancient trade routes and greater prosperity among the coastal regions. The boom in the past three decades in China is also attributable to its coastal provinces that have exported their way out of relative poverty.

A prominent example of port-led development is the city-state of Singapore that has been able to become a First World country from a Third World one all within a span of 50 years. Even Japan and South Korea have had benefited from their trade along their significant coastlines and improvements in their port sectors.

India has 12 major ports, close to 200 minor ports and innumerable intermediate ports. The ports in India are administered with a twin governance mechanism, with the major ports coming under the union government and the minor ports under the respective state governments. This mechanism has enabled the major ports to see a bulk of investments over the years. The development of major ports has been historically at the expense of the non-major ports, a majority of whom have underperformed when compared to major ports and global peers. However, this trend is changing fast and the non-major ports now are equally responsible for growth within the sector.

Indian exports have also been hit in the past six months and this is expected to have an adverse bearing on the country’s trade relationships. While this has not got much to do with the internal aspects of the ports sector but rather sluggish international demand. The reduction in activity is likely to impact the ports sector in an adverse way if a long-term strategy is not put in place.

The strategy should focus on following four points:

First, the focus should be on improving infrastructure in the ports sector. There is a need to relook at PPP as a mechanism within the sector that enables in the ports led development strategy. Going ahead, the government should look at introducing more competition both within the major and non-major port sectors. This includes more private sector participation in the sector.

Second, privatization necessarily should not mean a loss of jobs but greater efficiency and productivity. There is a great deal of anxiety, especially among the labour unions, on corporatization of ports. The need is to address productivity without necessarily resorting to layoffs. Better processes and institutional mechanisms can do a lot of good for the ports sector and trade. There is a lot to learn from the institutional processes of Gujarat and Andhra Pradesh that have been able to do a lot of good on the non-major ports sector development. These states now account for roughly 90 percent of all the traffic handled by the non-major ports.

Third, there is the need for faster movement on the inland waterways projects that offer a huge untapped potential. Just to give an example: the inland waterways in India carried 70 million tonnes of exported commodities in 2012 which is miniscule compared to their foreign counterparts. The comparable figures were 615 million tonnes for the US, 565 million tonnes for the European Union and 1.1 billion tonnes for China. The river systems are thoroughly under-utilised and over-polluted at present. The inland waterways can not only be cleaned this way but also be used for promoting cruise tourism. The government’s plan to carve out 101 national waterways is thus a step in the right direction. However, this move will entail lots of investments in terms of creation of infrastructure, especially since the silt levels in the Himalayan rivers are very high. The Inland Waterways Authority of India (IWAI) is doing well to identify waterways and do a thorough study for thr development of inland waterways.

Fourth, there is a critical need for policymakers to understand the link between the development of ports and the inland waterways sector and India’s economic development. The Make in India programme will only be successful if a Move in India programme is successful. Part of this will entail building waterways that will help in the movement of cargo at cheaper rates than the already saturated rail and road corridors. An integrated view will, thus, not only help in the construction of an Integrated National Transportation Waterway Grid but more importantly, leverage the relatively unused resources for national development.