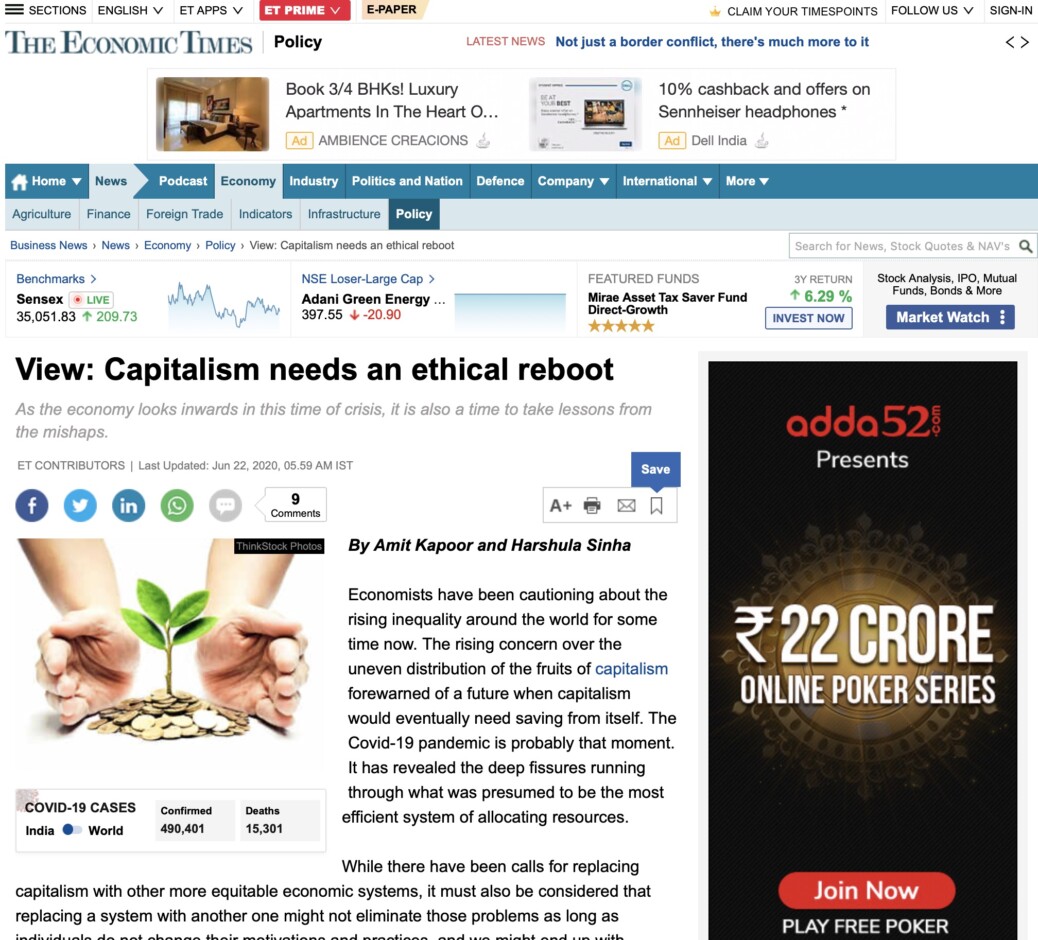 Economists have been cautioning about the rising inequality around the world for some time now.  The rising concern over the uneven distribution of the fruits of capitalism forewarned of a future when capitalism would eventually need saving from itself. The Covid-19 pandemic is probably that moment. It has revealed the deep fissures running through what was presumed to be the most efficient system of allocating resources.

While there have been calls for replacing capitalism with other more equitable economic systems, it must also be considered that replacing a system with another one might not eliminate those problems as long as individuals do not change their motivations and practices, and we might end up with neither equality nor efficiency.  The solution instead lies in reworking the ethics underpinning capitalism.

In our search for an ideological foundation, we don’t need to look further than our own nation. India has given the world the concept of Dharma (righteousness), an ever-evolving ideology that withstands the test of time. Although Dharma is central to Hinduism and Buddhism, it is not restricted to a religion but can be better understood as a code of conduct, duty or ethics. Eastern culture has always been bent towards following a path that incorporates the concerns of the community at large, and knowingly or unknowingly, Dharma has been the guiding principle.

Capitalism, a Western invention, has ideological underpinnings that puts the individual at the centre. Each person striving for their own success and happiness is not antithetical to Dharma per se. However, like any other ideology stretched too far, individualism may drive capitalism towards its end. Capitalism, that had begun to sustain cracks in the façade since the 2008 recession, might reach its maturity in this pandemic unless radical reforms are brought on.

As the institutions are forced to readjust to respond to the Covid-19 pandemic, one can distinctly see a chasm between the haves and the have-nots. The virus did not discriminate but the pandemic did hit those in the lower rung harder than the rest. The spike in lay-offs, shut down of small businesses, lack of access to healthcare for all and the overall lack of safety nets for the less fortunate during the pandemic indicated that the modern-day capitalism was beneficial to only a few, and was definitely not prepared for a rainy day.

Even when it was business as usual, the glorification of working hard towards individualistic goals seemed to have become a justification for suffering of others and the self. The largest corporations have reached the pinnacle because of the toil of its employees, who are sold the idea of corporate slavery as a prerequisite for success. The franchise companies are able to build their brand value shouldered by their franchisee stores who make high-stakes investments, bear the risk and typically have low profit margins. In fact, even the most profitable retail stores earn lesser than the CEO of those corporations.

This single-minded pursuit of wealth has also become a justification for overlooking environmental hazards or the negative externalities arising out of the capitalistic pursuits. Evidently, the ideological bedrock of capitalism needs a reform.

As the economy looks inwards to become more self-sufficient in this time of crisis, it is also a time to reflect and learn from the mishaps. Here, capitalism underpinned by the ideals of Dharma or righteous capitalism is the way forward. A conscientious capitalistic order where actions of businesses not only benefit themselves but also the society is a more sustainable and equitable system.

The examples of conscientious capitalism were seen during the pandemic too. If there were instances of unethical business practices, there were also practices that demonstrated righteousness in words and deeds. At a time of a health crisis, some businesses switched up their production to cater to the emergent needs, whereas those that could not help directly turned to donations or helped small businesses in their supply chain stay afloat. Amid layoffs and deferred increments, some corporations even took the proactive measures of hiring more, promoting employees and paying out increments. Such enterprising steps reveal our ability to make radical changes if the need arises.

While reforming the modern-day capitalism that is a culmination of decades of practices is a herculean task, the corporations that have continued to demonstrate best practices give hope for the future. The silver lining to the current crisis is that it has sown the seeds of reform that might have taken more time otherwise. It has jolted us out of our comfort and demanded from us the empathy that the world seemed to have lost along the way. The pandemic has propelled one to contemplate on doing the right thing. The business world has not been immune to those teachings. Now, the next step is to put those teachings into practice.

This is the time for large corporations to follow their contemporaries that helped livelihoods or helped their business ecosystems and preserved competitiveness within, instead of using the crisis to monopolise market share. While it was a step closer to curb the rising inequality, it can be the start of taking more proactive measures to mitigate inequality. Businesses need not restrict themselves to Corporate Social Responsibility (CSR) to do so. Following on the path of Dharma and doing good to self as well as others requires businesses to conduct themselves with the objective of earning revenue as well as generating value in the society. Thus, imbibing Dharma in capitalism is a tough balancing task that requires creativity. Nevertheless, there do exist such innovative business models that serve as much as a blueprint for innovation as an evidence to good capitalism.

In the long term, an ethical capitalistic order should demonstrate an approach to innovation that puts greater emphasis on creating value for all stakeholders. This would lead to a sustained economic growth that does not leave the larger part of the society behind, and that would be the true practice of Dharma.

The article was published with Economic Times on June 22, 2020.