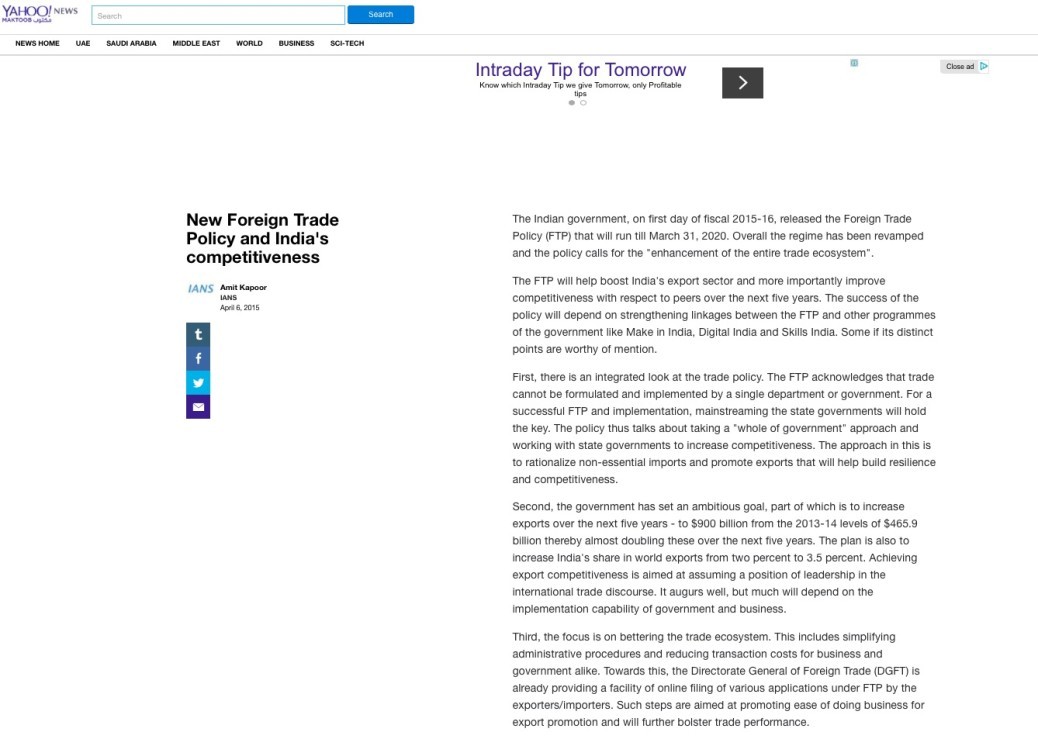 The Indian government, on first day of fiscal 2015-16, released the Foreign Trade Policy (FTP) that will run till March 31, 2020. Overall the regime has been revamped and the policy calls for the “enhancement of the entire trade ecosystem”.

The FTP will help boost India’s export sector and more importantly improve competitiveness with respect to peers over the next five years. The success of the policy will depend on strengthening linkages between the FTP and other programmes of the government like Make in India, Digital India and Skills India. Some if its distinct points are worthy of mention.

First, there is an integrated look at the trade policy. The FTP acknowledges that trade cannot be formulated and implemented by a single department or government. For a successful FTP and implementation, mainstreaming the state governments will hold the key. The policy thus talks about taking a “whole of government” approach and working with state governments to increase competitiveness. The approach in this is to rationalize non-essential imports and promote exports that will help build resilience and competitiveness.

Second, the government has set an ambitious goal, part of which is to increase exports over the next five years – to $900 billion from the 2013-14 levels of $465.9 billion thereby almost doubling these over the next five years. The plan is also to increase India’s share in world exports from two percent to 3.5 percent. Achieving export competitiveness is aimed at assuming a position of leadership in the international trade discourse. It augurs well, but much will depend on the implementation capability of government and business.

Third, the focus is on bettering the trade ecosystem. This includes simplifying administrative procedures and reducing transaction costs for business and government alike. Towards this, the Directorate General of Foreign Trade (DGFT) is already providing a facility of online filing of various applications under FTP by the exporters/importers. Such steps are aimed at promoting ease of doing business for export promotion and will further bolster trade performance.

Fourth, the policy distinctly focuses on a market strategy and a product strategy for trade. The market strategy includes bettering India’s present engagement with the key economies of the world and strengthening the trading engagement over the next five years. These include the Indo-US, Indo-European, Sino-Indian, Indo-East Asian, Indo- Australian and Indo-New Zealand, Indo-South Asian, IndoWANA (West Asia & North Africa), IndoLatin American & Caribbean, Indo-CIS (Commonwealth of Independent States) and finally, Indo-African trade engagements. The strategy will help provide respite against the two mega-regional trading agreements (MRTA) of which India is not a part.

The product strategy seeks a movement up the value chain for a variety of goods and services. In the context of the manufacturing sector, in particular, the engineering goods, electronics and pharmaceutical sectors, the removal of regulatory hurdles along key economic markets will hold the key. Other sectors that feature prominently for exports are the labour intensive areas that include leather, textiles, gems and jewellery, agriculture, plantation crops, marine products and iron ore exports. The strategy here is to increase realizations by focusing on value-addition and producing goods that are environmentally friendly. Another product strategy entails leveraging the MSME sector by focusing on hi-tech products. The policy also talks about the “India” branding that will aid in greater value realization in export markets. These steps are again are well intentioned, but results will finally depend on swiftness and agility in engagement and implementation.

Fifth, the policy also brings in some institutional changes like merging the earlier export promotion schemes under two plans – namely MEIS (Merchandize Exports from India Scheme and SEIS (Services Exports from India Scheme). The MEIS aims at exports of specified goods to specified markets. The rate of rewards ranges from 2-5 percent. The SEIS is for an increase of notified services, and select services will be given rewards of 3-5 percent. SEIS shall apply to “service providers located in India” instead of “Indian service providers”. Another institutional change in line with the WTO agreement on trade facilitation is the proposal to set up a National Committee on Trade Facilitation for easing customs procedures and reducing transaction costs for traders. Also, being set up is the Centre for Research in International Trade for strengthening India’s research capabilities in the area of international trade. These are great steps for developing research capability and preparedness to deal with foreign trade challenges.

With respect to the external sector, leveraging trade relationships, especially since we are not part of two out of the three-major MRTAs, will hold the key. The fact that the commerce secretary will be out to Tehran for a two-day visit beginning Monday (April 6) speaks of the quick movement on the part of Indian government to strengthen bilateral ties. More such visits will be necessary to secure and strengthen trading relationships that will aid in meeting the target that the FTP envisages. Ultimately, success in meeting the target will depend on some good luck and lots of hard and smart work, taking into account the challenges and opportunities that emerge out of the changing global trade scenario.