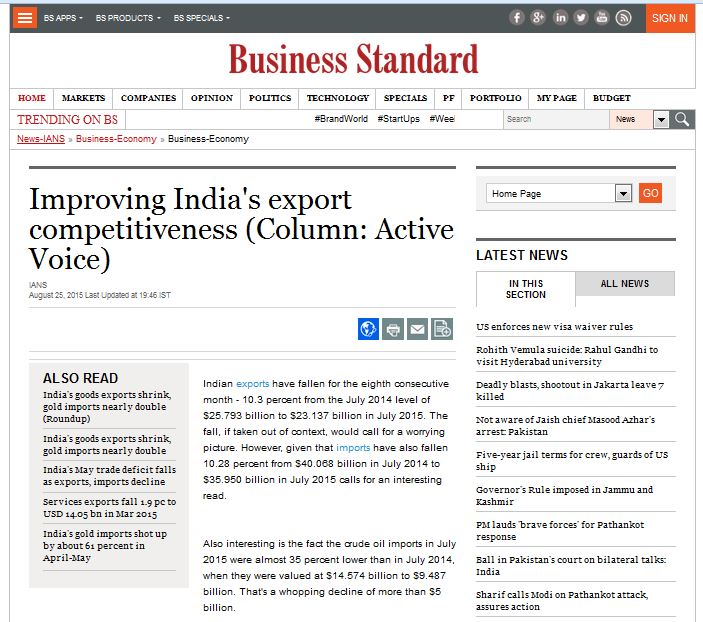 These are some of the steps that India could take to make its exports competitive in getting over the present predicament and also tide over long-run concerns:

First, it is imperative that India’s diversification of exports in products, services and destinations continues. A recent IMF working paper, ‘Make in India: Which Exports Can Drive the Next Wave of Growth’ also lends credence to this view. According to this view, India is a relatively diversified export economy and going ahead, should further diversify its product and service basket, as also the countries to which it exports.

This has been happening consistently since the time of liberalization when exports constituted less than 10 percent of the GDP. Today, exports stand close to 25 percent of the GDP. Manufacturing and natural resource exports constitute two-third of the export basket while the remaining one-third comprises exports of services. India does well on the services front with some four of the global exports being from India.

In the manufacturing segment, the country has low-value exports compared to other emerging market economies and, therefore, should look to improve both their quality and complexity. Along the destination dimension, the focus should be diversifying exports as this would help India tide over downturns. The fact that India’s percentage of exports to emerging markets have increased in comparison to the US and Europe points to the fact that policymakers have taken cognizance of the changing external demand. The Look and Act East policy should be augmented with a Look and Act West policy taking into account the possibilities in the Middle East and African regions. Going ahead, trade agreements and greater export diversification will prove to be helpful.

Second, in line with the improving the complexity of manufacturing sector is bettering the country’s MSME ecosystem. The MSME’s contribute an estimated more than 40 percent to the export segment. At present, the segment remains informal and cluster-driven approaches are mostly absent. Timely statistics, as well as information pertaining to export statistics, remains at best hidden from the common people. Also, operating an MSME enterprise is a cumbersome task due to labour regulations, while access to finance also remains a challenge. Technology adoption and labour productivity are both low, leading to inefficient outcomes. Going ahead, all these factors should be addressed for getting better value additions and bettering export competitiveness.

Third, India should look to embrace international competition. The infant industry argument for trade protectionism is outdated and needs to be replaced with an open economic paradigm for economic development. While there needs to be a calibrated approach to trade liberalization, the movement towards this should continue for greater economic good. It means land, labour and capital markets should be further reformed(with adequate regulation) for greater domestic and foreign participation. Hopefully, these would lead to a greater ease of doing business and make operating businesses easier. It could also lead to entrepreneurship – so critical for job generation. Even farmers doing value addition constitute businesses and the whole debate of farmer versus business seems to be anachronistic.

Over the coming decades, India will have to look at these aspects for export competitiveness. The need is provide adequate facilities in terms of land, basic infrastructure like roads, and basic services like access to finance, education and healthcare facilities et al to the people to set up enterprises and create value. Once these enterprises achieve scale, they should be mentored and allowed to export to markets where they face international competition but also get adequate value for their exports. This is the only lasting way to achieve and sustain export competitiveness.

Published in Business Standard on August 25, 2015. To know more