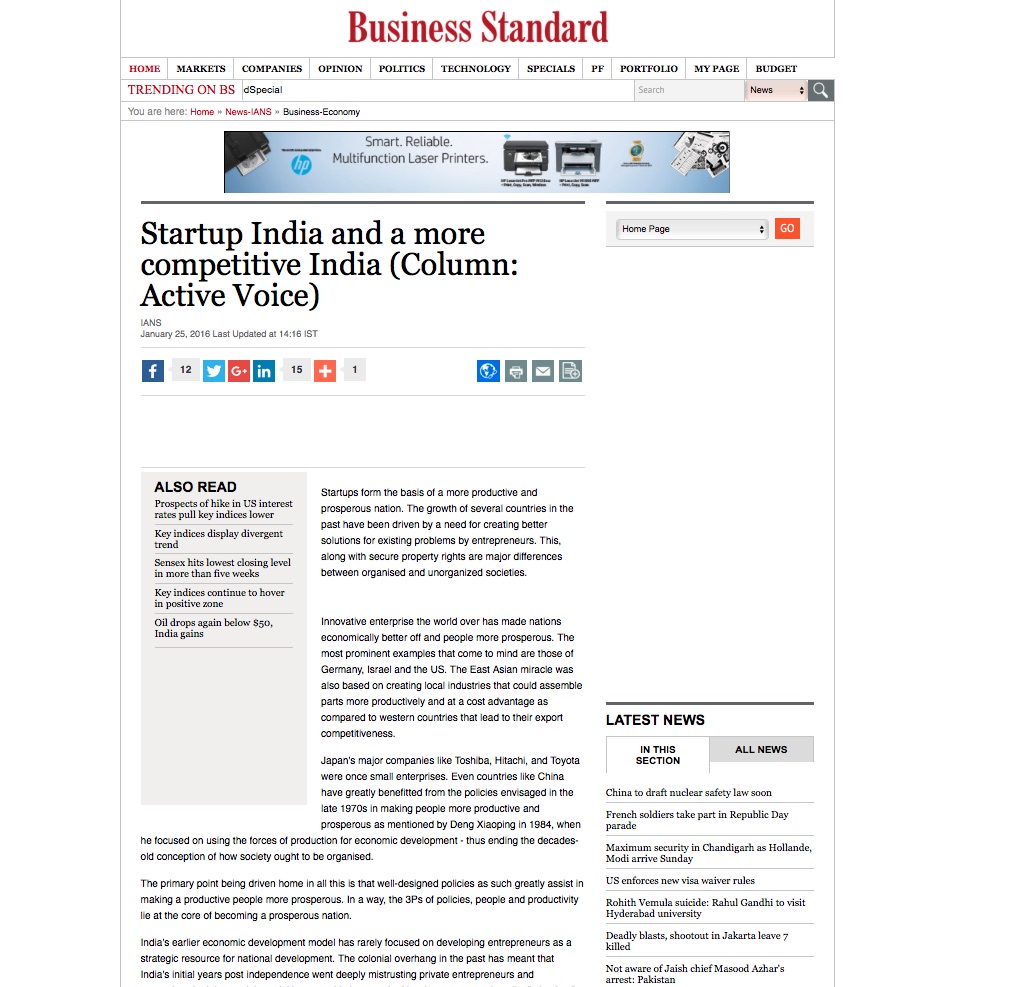 Startups form the basis of a more productive and prosperous nation. The growth of several countries in the past have been driven by a need for creating better solutions for existing problems by entrepreneurs. This, along with secure property rights are major differences between organised and unorganized societies.

Innovative enterprise the world over has made nations economically better off and people more prosperous. The most prominent examples that come to mind are those of Germany, Israel and the US. The East Asian miracle was also based on creating local industries that could assemble parts more productively and at a cost advantage as compared to western countries that lead to their export competitiveness.

Japan’s major companies like Toshiba, Hitachi, and Toyota were once small enterprises. Even countries like China have greatly benefitted from the policies envisaged in the late 1970s in making people more productive and prosperous as mentioned by Deng Xiaoping in 1984, when he focused on using the forces of production for economic development – thus ending the decades-old conception of how society ought to be organised.

The primary point being driven home in all this is that well-designed policies as such greatly assist in making a productive people more prosperous. In a way, the 3Ps of policies, people and productivity lie at the core of becoming a prosperous nation.

India’s earlier economic development model has rarely focused on developing entrepreneurs as a strategic resource for national development. The colonial overhang in the past has meant that India’s initial years post independence went deeply mistrusting private entrepreneurs and enterprises in doing social good. However, this has resulted in what many people call a “mixed up” economy rather than a mixed economy. This is where Prime Minister Narendra Modi’s speech at the Startup India launch mentioned the role of government to stop over-regulating and letting the people themselves resolve the issues they face.

If one comes to think of it, the jobs that India requires over the next decade – with a million people entering the workforce every month – cannot be provided fully by the formal sector multinationals and government’s public sector enterprises alone. In a way, this presents a sizeable opportunity for India to capitalise on its demographic dividend. However if India continues with is older policies, it may very well end up curtailing private sector development as well as entrepreneurship.

Now, the government rightly recognises the role of entrepreneurs as job creators and capable of absorbing the surging workforce in the decade ahead. The startup plan which has been unveiled before the people has many positives for unleashing the latent ‘Chi’ or the creative force of the Indian economy. These include doing away with certifications, simplification for opening up a start-up and helping start-ups protect their intellectual property with procedural help as well as financial assistance.

Apart from this, other provisions include creating a fund of funds with a corpus of Rs.10,000 crore (almost $1.5 billion) that has been hailed and scorned at in equal measure due the to public funds being used as venture capital.

Taken together, these are bound to help develop a culture of entrepreneurship. However, a significant point is looking at structural issues that hinder entrepreneurship in the Indian context. The government has done well to draw the attention of youth for pursuing their dream of entrepreneurship, but deeper societal issues must also be addressed for optimal outcomes. Over the next 10 years, India’s aim should be to make the ecosystem of enabling entrepreneurship more robust and making it a more viable career option for individuals wanting to take the plunge. How this will play out will determine India’s ability to leverage its human resources effectively for economic growth and competitiveness.

Published in Business Standard on January 25, 2016. To know more