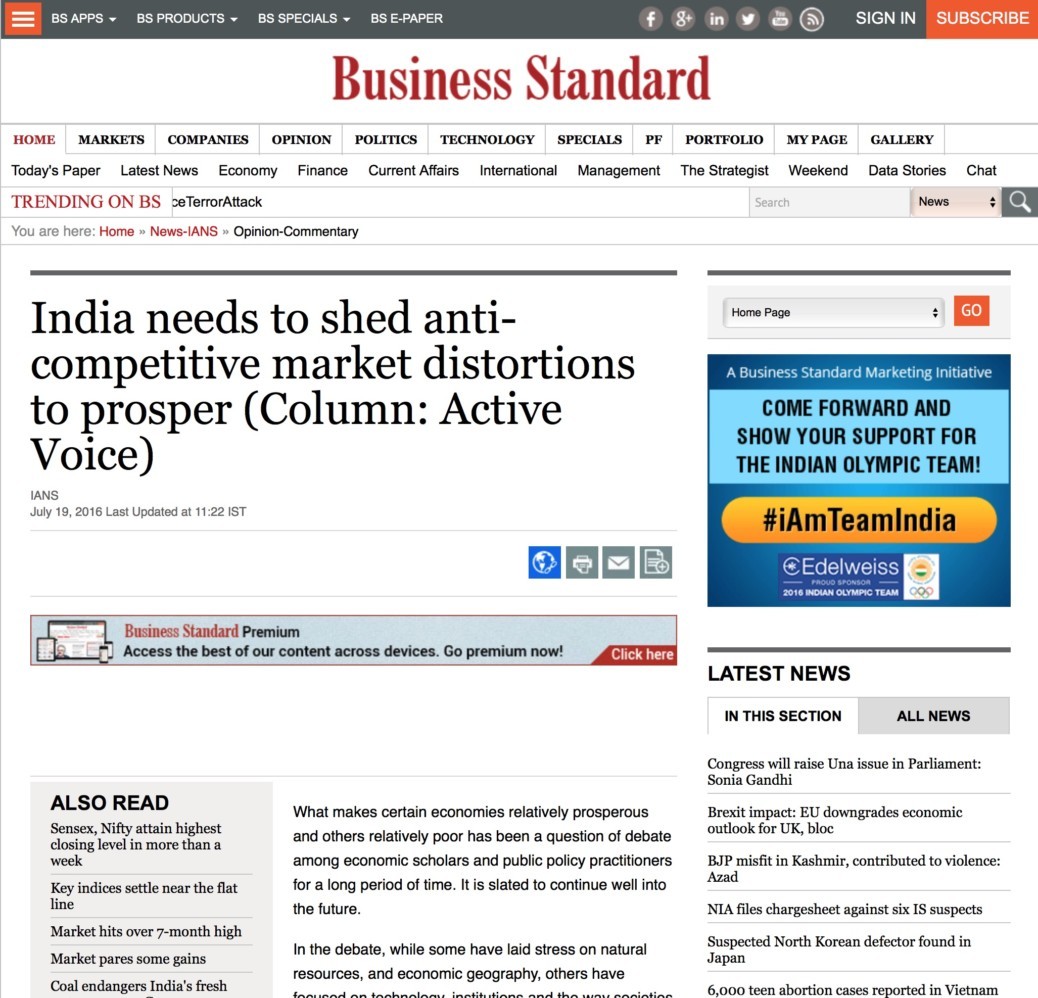 What makes certain economies relatively prosperous and others relatively poor has been a question of debate among economic scholars and public policy practitioners for a long period of time. It is slated to continue well into the future.

In the debate, while some have laid stress on natural resources, and economic geography, others have focused on technology, institutions and the way societies structure and implement the rule of law within societies as prerequisites for economic growth and prosperity.

While all of these factors play an important role in determining prosperity, the role of competition for enhancing productivity and ultimately prosperity is central to economic development. At times despite knowledge of what works, policy is steeped in politics, legacy issues and previous experience in. This may cause several distortions to fully functioning competitive markets.

A recent study by UK-based Legatum Institute titled ‘Anti- Competitive Market Distortions and Their Impact — India Case Study’ has some interesting insights about market distortions and their impact on prosperity in India. The study also has two related cases of India’s aviation and cotton and garment industry to reinforce the findings of the main study. There are four important points of note.

First, the study describes “regulatory regime” as “the legal, economic and governance structure” that applies in the country as a whole. Anti-competitive market distortions (ACMDs) are described as policies or regulations that provide a competitive advantage to some players or a player to the detriment of others.

The study looks to categorise ACMDs into six broad types. These are (1) government laws, regulations, or practices that eliminate competition completely; (2) laws that lessen competition; (3) laws that are applied differently among firms, or exemptions given to some firms; (4) distortions caused by state-owned enterprises (SOEs); (5) action or inaction by competition agencies and (6) anti-competitive state aid or support. All these capture distortions in the market that hamper productivity.

In the level 1, scenario improvements are made in doing business like registering a business and the like. The simulator results in this scenario show that improvements would be negligible — in this case a GDP per capita rise (at constant prices) from $1,500 to $1,507. In the level 2 scenario, several improvements are made along the dimensions of resolving insolvency, freedom to own foreign currency bank accounts, intellectual property protection and improvement in all ease of doing business parameters. In such a scenario, the GDP per capita increases from $1,500 to $3,723. In the third scenario, which has a completely pro-competitive regulatory framework, a high productive increase is recorded, catapulting India from a per capita income of $1,500 to $29,691.

Similarly, for the three levels, the cumulative job addition will be 0.002, 1.6 and 242 million. This indicates the extent to which market distortions have hampered India’s progress.

Third, the benefits that may accrue due to removing market distortions have a big impact on poverty. It is estimated by the authors that removing ACMDs has the potential to lift many people out of poverty. However, this will have an impact on prices, which may lead to changes in how poverty is defined. For instance, in the level 3 scenario, the productivity simulator predicts that poverty will be completely eliminated on a $1.25 and $2 a day level. However as income rises to a $29,691, poverty measures will have to be reassessed and reset accordingly.

Finally, in the cases on the Indian aviation and cotton industries, the study compared and focuses on how improvements can be made to the existing structures as well as how regulations can be made more market-friendly. While in the civil aviation sector the ACMDs have diminished in the past, it is a work in progress. The Indian aviation sector and regulatory framework is also compared with the EU and the conclusion is that the latter is freer.

In the case of cotton and garment industry, the study mentions minimum support prices and input price controls as sources of market distortions. In the garments industry, small-scale reservation for the textile sector and import duties are seen as anti-competitive market distortions. Apart from this, labour laws and taxation are ACMDs hampering the sector’s growth.

Over the next few years, more such studies should be done which focus on the economics of prosperity derived from real world experience and how to unlock value in various sectors of the economy. The study covers new ground in this regard to make India more competitive. In this 25th year of India watershed moment in economic history, policymakers must further India’s reform agenda and strive to remove its anti-competitive market distortions.

Published in Business Standard on July 19, 2016. To know more