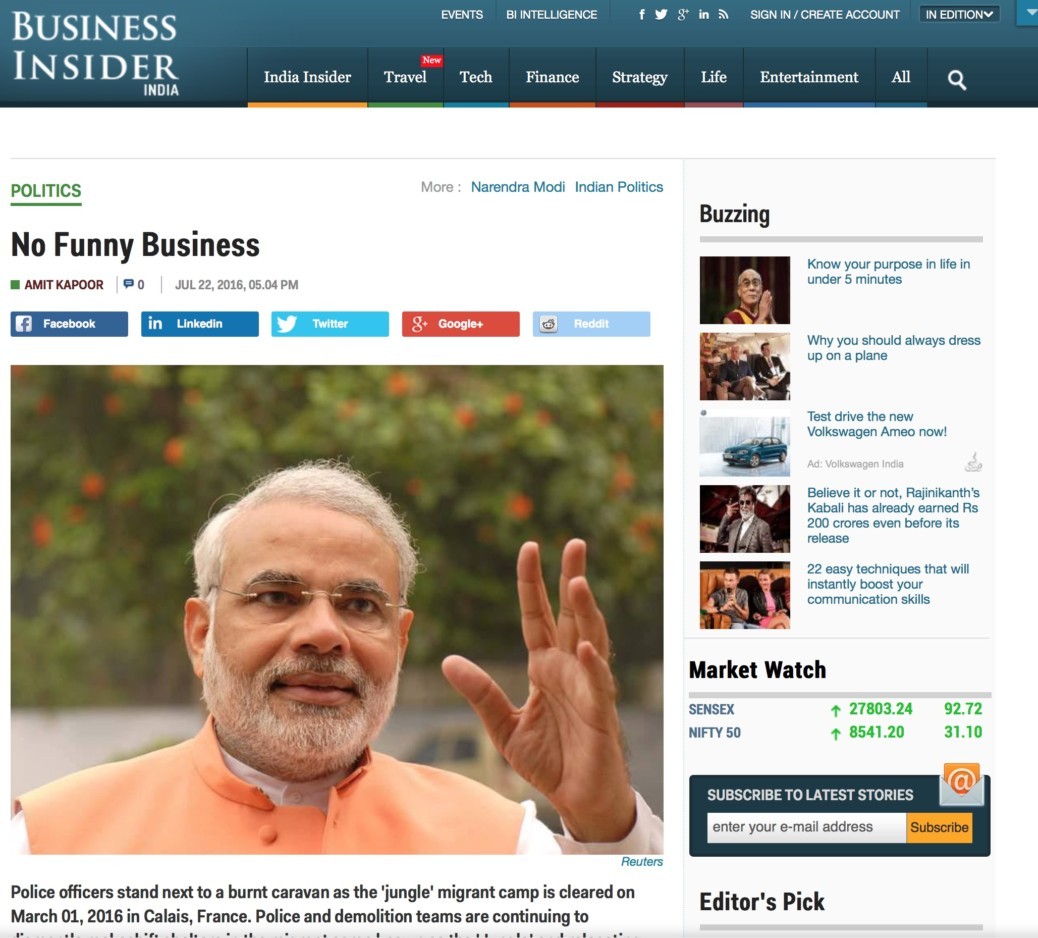 “These days humour can be a very risky thing.” In a very recent interview to Arnab Goswami, these were our esteemed prime minister’s own words. But why did Mr Modi make this claim? What is it about the current Indian society that makes the PM and most of our citizens tread with unusual caution in the current atmosphere? Our constitution ideally & fundamentally grants enough space to individuals to crack a limerick every now and then, but these days, the vibe is one of uneasy tension.

The Indian society is no stranger to having been catcalled on issues regarding tolerance or its lack thereof. When we use tolerance as a commonplace word we refer to it as “willingness to accept feelings, habits, or beliefs that are different from your own”. This fundamental value at the level of individuals and communities will carry a lot of weight in the way the world will reform in the coming years. Tolerance in any society is deep seeded in its cultures & the values that culture propagates. India is home to a multitude of diverse cultures and intolerance would be the friction point where these cultural ideas & differences collide and start a fire. Tolerance, in essence, is premised on accommodating diversity & being receptive to differences.

Why is it relevant?

According to Pew Global, Indians actually favour, the economic influence of the United States but show a downward trend when it comes to cultural exports from the same. But with big international business also comes their cultural identity and influence, and we need to learn to blur the lines between the two and start being more receptive, tolerant and embracing of these western liberal values (and the humor that comes with it), if we really want to achieve the status for India as a global superpower. But can we actually put the blame on our people for being like this? Humor which most people seem to have a problem against, (at least the cases which make it to our TV screens), are associated with one way or the other as “western culture attacking Indian culture”, it is almost as if India’s 200 year colonial ordeal with the British has left them very suspicious and unwelcoming of any external influence, so much so that it has manifested itself as an apparently irrational & orthodox reflex, one which the millennials are revolting against. This hinders progress as it widens the disparity between the generation of yesteryears and the current millennials. It is almost as if people are blindly shielding something they themselves see & know no inherent value of.

India has had a rich history that has been rooted in its hierarchy. Our social structures have often been divided to the extent that the establishment continues to offer differential treatment on the basis of these categorical social structures. As a consequence of the disparate evolution of these social structures throughout our history, India’s growth towards becoming a more tolerant country has often been very volatile & heterogeneous. According to Angus Maddison’s findings, India accounted for more than 20% of the world’s GDP in the early 18th century due to it being a hub for textile and agricultural production. Historically & through the times, port cities & towns like Mumbai and Vishakhapatnam have always been accommodating & receptive of various cultures and people because of regular trade with different nations & faraway lands. This has certainly been a contributing factor to their economic prosperity. It is a self-validating cycle since being tolerant again allows for more trade & prosperous opportunities to flourish, the merging of ideas & culture leads to an evolving mindscape that fosters innovation.

In recent times, this is further evidenced by the economic success of many Diaspora Indians who’ve migrated to western countries. Therefore as a whole, Indian culture does suggests presence of universal values of progressiveness, a steady work ethic and development, but India’s history has also been plagued by (and continues to be) numerous instances of communal violence and bloody riots. According to data by the home ministry, the country witnessed a 17 per cent increase in communal violence incidents in 2015 as compared to last year. Instantly, troubling primetime headlines of such riots, fatal lynching incidents and comedians facing the flack for impersonating popular icons come to mind. These events have certainly begun to set a very unwanted precedence for India as a land that’s conducive to accommodating diversity.

Intolerance and its provocations

While it is certainly tempting to conclude that the reason behind India’s intolerance rising is politically motivated like most publications are inclined to do, it is up for stark debate. News channels and popular media are always in a frenzy to discredit the current establishment using any comparison necessary to run with a breaking story, but what’s noteworthy is that any result can be concocted by comparing two arbitrary time periods, even if the comparison is statistically insignificant. However, the current establishment should make more of an effort to address these social issues, since staying silent only fans the flame.

Regardless of whether people associate intolerance with the establishment or not – India’s image of a global power that shares the western ideas of democracy and freedom is clouded by such backward incidents. Especially since its neighbour Pakistan is seen as a volatile state and China though rapidly growing is always questioned about its values and human rights. Furthermore, it hurts economic growth in the long run, as advocated by the soon to be former RBI governor Raghuram Rajan, since it hurts investment and trade prospects for the country.

One thing is clear however, with a rising creative class, and with a global economy that’s fast moving towards transitioning into a creative one, where ideas, innovation and information are currency worth their weight in gold- our establishment & citizens would be better off addressing these social issues, before the silence pierces the bubble of India’s apparently mighty stature & culture.

Published in Business Insider on July 22, 2016. To know more