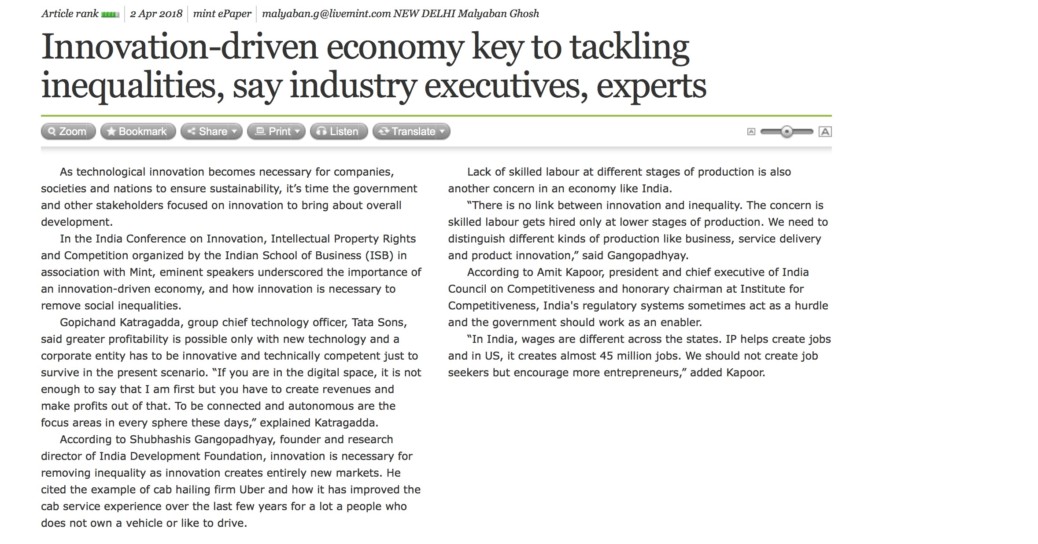 Dr. Amit Kapoor shared his views on Intellectual Property, Innovation and Economic Growth at the Back to Basics: The Role of Property in the IP System conference in Delhi. The conference was covered by MINT and his views were captured in the article titled “Innovation-driven economy key to tackling inequalities, say industry executives, experts”.

New Delhi: As technological innovation becomes necessary for companies, societies and nations to ensure sustainability, it’s time the government and other stakeholders focused on innovation to bring about overall development.

In the India Conference on Innovation, Intellectual Property Rights and Competition organized by the Indian School of Business (ISB) in association with Mint, eminent speakers underscored the importance of an innovation-driven economy, and how innovation is necessary to remove social inequalities.

Gopichand Katragadda, group chief technology officer, Tata Sons, said greater profitability is possible only with new technology and a corporate entity has to be innovative and technically competent just to survive in the present scenario. “If you are in the digital space, it is not enough to say that I am first but you have to create revenues and make profits out of that. To be connected and autonomous are the focus areas in every sphere these days,” explained Katragadda.

According to Shubhashis Gangopadhyay, founder and research director of India Development Foundation, innovation is necessary for removing inequality as innovation creates entirely new markets. He cited the example of cab hailing firm Uber and how it has improved the cab service experience over the last few years for a lot a people who does not own a vehicle or like to drive.

Lack of skilled labour at different stages of production is also another concern in an economy like India.

“There is no link between innovation and inequality. The concern is skilled labour gets hired only at lower stages of production. We need to distinguish different kinds of production like business, service delivery and product innovation,” said Gangopadhyay.

According to Amit Kapoor, president and chief executive of India Council on Competitiveness and honorary chairman at Institute for Competitiveness, India’s regulatory systems sometimes act as a hurdle and the government should work as an enabler.

“In India, wages are different across the states. IP helps create jobs and in US, it creates almost 45 million jobs. We should not create job seekers but encourage more entrepreneurs,” added Kapoor.