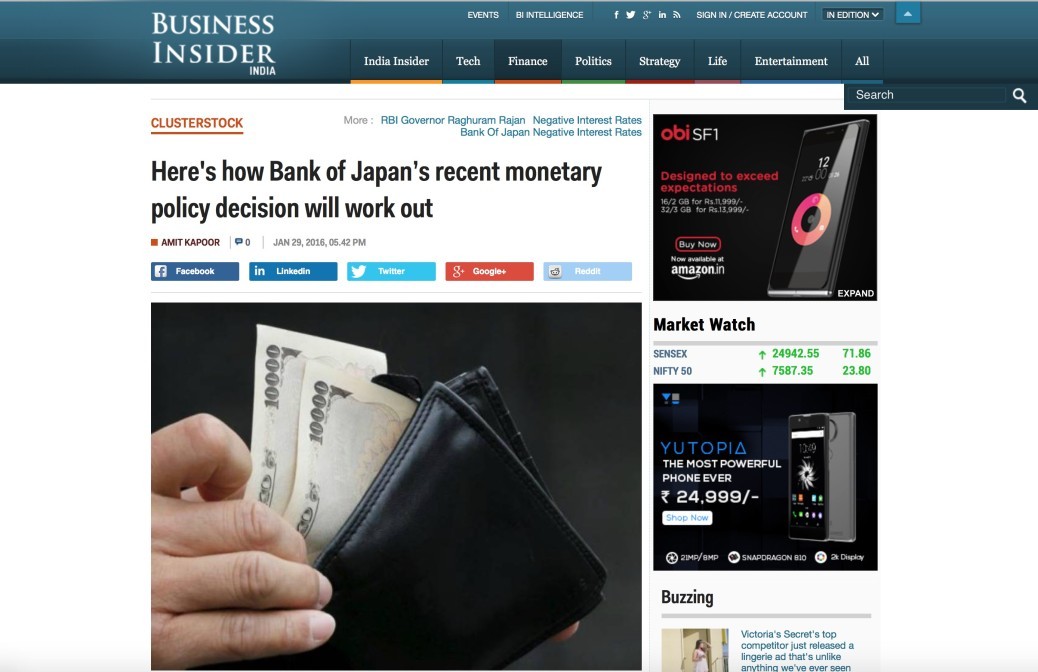 The recent decision of the Bank of Japan (BOJ) is seen by many as a surprising move. The Asian markets seemed to move in a positive direction post the announcement as Japan adds another lever to its arsenal of weapons to revive its mildly recovering economy. However, the policy choices for the BOJ seem to be running out. It is already engaged in a massive bond-buying program of buying 80 trillion yen or $674 billion in assets a year which has lead to a ballooning of debt close to 230 percent of the GDP, the highest among the major economies of the world.

Two decades of stagnation and a high debt coupled with a need to boost demand has meant that the task is not an easy one to achieve. This is where the bond buying program was initiated by the BOJ under the leadership of the BOJ governor Haruhiko Kuroda.

But the success has been mixed. The negative interest rate announcement is the first time for BOJ and was a 5-4 close tie in favour of negative interest rates with Quantitative and Qualitative Monetary Easing (QQE). It comes in the wake of weak data on the economic front especially as inflation seemed to be on the lower side (0.5%) nowhere close to the target set by BOJ of 2 percent despite the BOJ’s monetary stimulus over the past some time now. Also consumer spending in December dropped 4.4 percent as compared to a year earlier which is also seen as a key reason behind the latest decision.

It is interesting to see how the latest decision falls in line with the broad program of ‘Abenomics’ which is based on the three arrows of fiscal boost, monetary expansion and structural reforms. So far, the work on all three is an ongoing program but still outcomes have yet to prove that ”Abenomics’ has been very successful. Monetary stimulus is a major component in ‘Abenomics’, and the BOJ seems to be fighting the ‘deflationary mindset’ which might just put Japan back in the throes of deflation.

It must be noted that the (QQE) with negative interest rate’ is designed to enable the BOJ to ‘pursue additional monetary easing across three dimensions, combining a negative interest rate with quantity and quality’. Another feature is that it comes post the resigning of the Economy Minister of Japan Akira Amari over allegations of bribery yesterday.

Last week in an interview with Shekhar Gupta, on NDTV’s ‘Walk The Talk’, RBI Governor Raghuram Rajan had remarked that at present the central banks across the world are engaged in increasing asset prices with the hope that the underlying economic activity will match these increased prices. This is what the recent BOJ decision hopes it would do to revive its economy.

For India and other economies, it means that the era of easy money is not over despite the Fed increasing rates once in the past year. With the Bank of Japan and ECB engaged in bond buying programs the era of easy money may well not be over. Over the next year, significant developments are in stock in the monetary policy space the world over. The BOJ is just the beginning.

Published in Business Insider on January 29, 2016. To know more