Here are the options for bettering higher education in India

Home Here are the options for bettering higher education in India 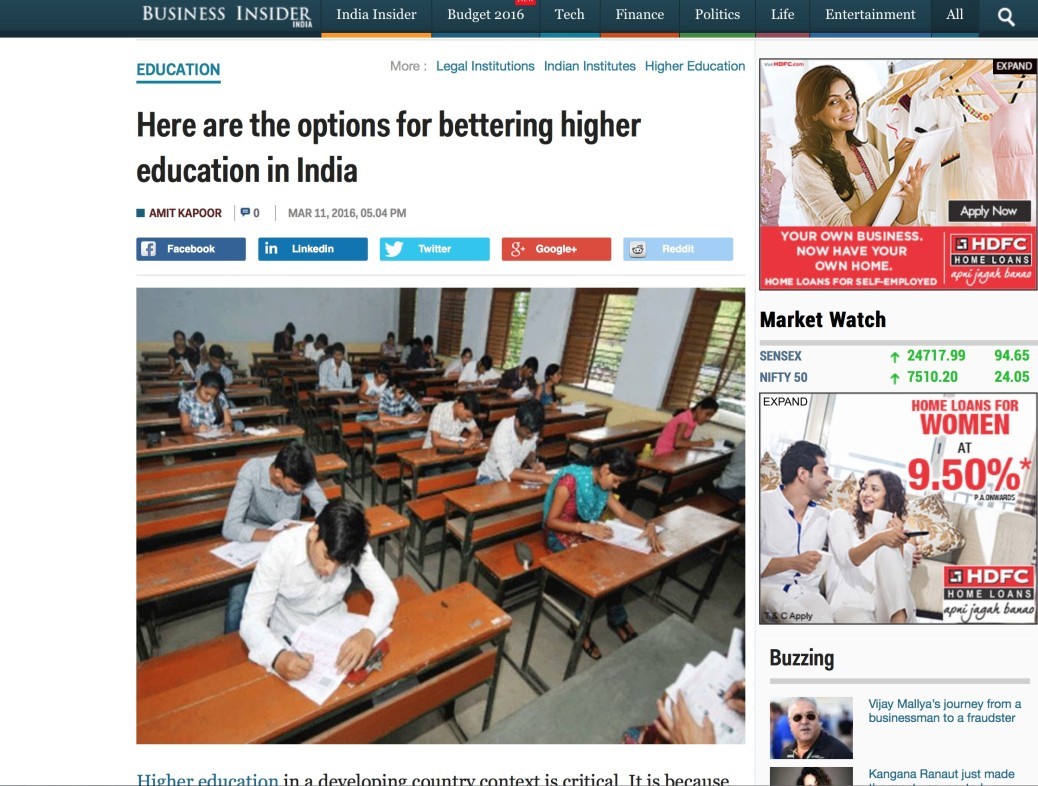 Here are the options for bettering higher education in India

Higher education in a developing country context is critical. It is because education is the bedrock on which a stable society with better-performing institutions of governance, a productive and competitive economy, as well as a fair and transparent media, rests. The institutions of governance namely the legal institutions, the political class, bureaucracy, healthcare institutions and banking sector have to be well educated for a well-functioning governance system. Similarly, a productive and competitive economy requires that the creativity of individuals is effectively channelized through education (not necessarily formal education) for a growth oriented and resilient economy.

Lastly, a knowledge economy rests on its intellectual class as well as a fair, transparent and accountable media. All these institutions when functioning in tandem create a stable political and economic order. At the core of this kind of a system are educated and thinking individuals, who can perform their duty with professionalism, ethics and integrity. For the creation of such an ecosystem, institutions of higher education are imperative. Do we have such a system is a pertinent question to ask? The answer lies between the extremes of an outright yes or an outright no. The purpose here is not to point to the shortcomings but to focus on how and what choices must be made for bettering the existing system.

There are four or five essential points that are at the core of the debate that must be focused on for understand and improving the higher education ecosystem in India.

The first of these deals with institutional form. Should institutions in higher education be built which are more specialized in nature or should institutions of higher learning have a more universal orientation? In short should be we have more institutions like NID which specializes in design education or should we have more state and central universities like BHU or JNU which are more universal in orientation? Both these choices have merits and demerits. In the case of public universities should the focus not be on giving more options to students regarding courses that they can take? Another relevant point is how do we improve institutional functioning within both these forms of institutions.

The second issue is the question of orientation and curricula. What must be taught at the institutions of higher learning is something which the members of academia, as well as students, should ponder on in consultation with the larger society. Also, another pertinent question that should be thought through is should universities be just places of creating knowledge workers or should they be institutions which produce thinking, individuals? Should the courses be embedded in the past or should they have a more contextually present orientation? What amount of course curriculum should be more relevant to the present and future should be thought through with great clarity. There are no easy answers here only choices which all stakeholders must reflect on and make.

Third, another relevant aspect is what level of political involvement should be allowed in universities? Universities are democratic spaces but what amount of politics and politicization should be permitted within universities is something for academia and to ponder over and decide keeping in view the broader societal consciousness in which these institutions of higher education operate. A rule based society governs itself via rules so must a university/ institutions of higher education. Another aspect within the broader point on politics and education is what areas will see political involvement and what areas will not see political participation. At the end of the day, the governments of the day must realize that educational institutions may be taking government funding but they are supposed to act and behave independently of the state. The purpose of an institution of higher learning is education, not ideological brainwashing and this holds true for both the left and the right. This point is important because often politics has taken precedence over reason and common sense in India. The sufferers will be the citizens in the long run. Often most of the debates in the country have become supercharged without adequate attention being given to facts and rules been given precedence.

Finally, another important point or rather a question is what is the government’s view on Foreign educational establishments in India versus the Indian educational institutions of higher education? How does it wish to solve the conundrum of bringing in more faculty which have expertise in their chosen domains especially when it has little to offer in terms of monetary remuneration? Should it not in this case like other ‘sectors’ be liberalized?

These few points are important to be kept in mind for building and deepening higher educational institutions that can produce not just professionals but thinking individuals that can reflect on their immediate reality and come up with solutions to India’s myriad problems. The education that they receive should make them aware of the rights and also their responsibilities and help them build a stronger and a more resilient India.

Published in Business Insider on March 11, 2016. To know more