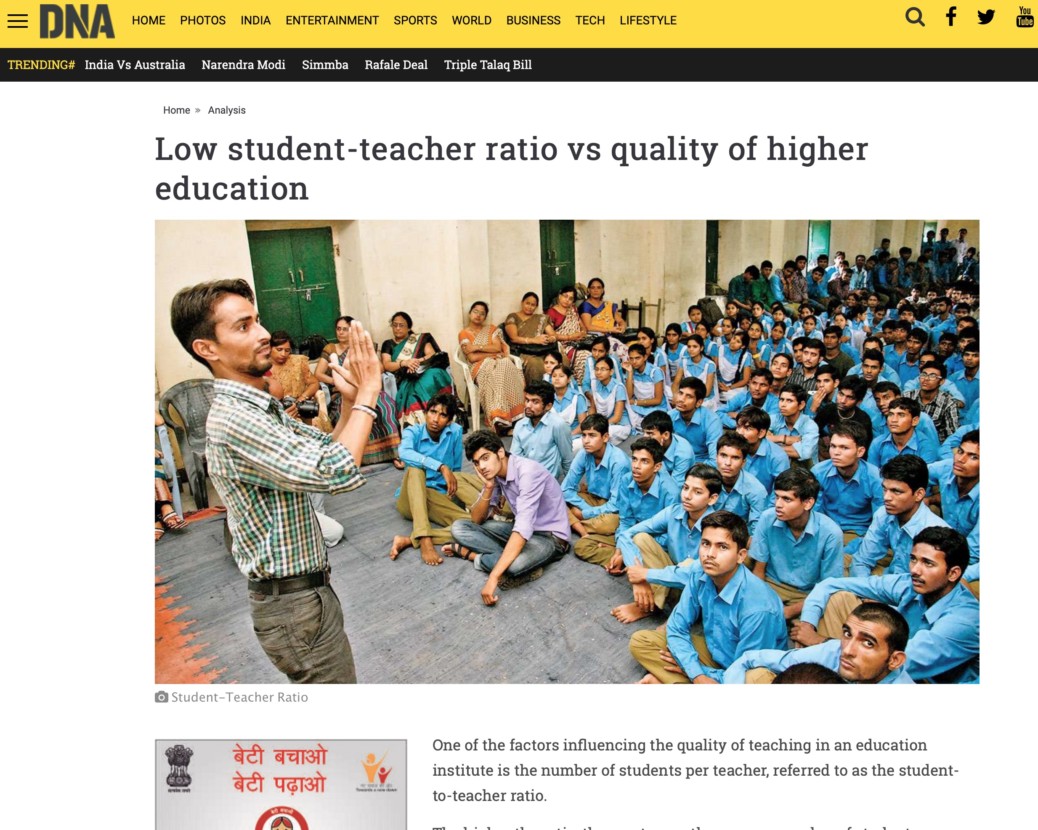 One of the factors influencing the quality of teaching in an education institute is the number of students per teacher, referred to as the student-to-teacher ratio.

The higher the ratio, the greater are the average number of students per teacher and the lesser is the time a teacher spends on an individual student, thus affecting negatively the academic performance of students.

For a country like India, which is faced with the challenge of reaping its demographic dividend, making higher education inclusive is important, but at the same time attention must be given to improving the learning outcomes, which could be achieved to some extent by addressing the continuing problem of faculty shortage in the country.

Over the last five years, higher education institutes in India have registered an increase in their enrollment from 32 million in 2013-14 to nearly 37 million in 2017-18, which will help in seizing the demographic dividend.

Further, looking at the state-wise variation in the student-to-teacher ratio, there are wide variations observed across different states.

In addition to a high student-to- teacher ratio, India also faces the issue of gender bias in the teaching profession at tertiary level of education.

States such as Bihar, Jharkhand and Uttar Pradesh have a majority of male teachers employed in the higher education institutes.

Addressing the issue of gender-based discrimination will not only help in easing the supply side constraints in the teaching profession, but would also improve the quality of teaching by enhancing competitiveness and productivity.

One of the most famous international ranking of universities, the Times Higher Education World University Ranking, grades universities according to their performance on five parameters, teaching (weightage, 30 percent), research (30 percent), citations (30 percent), outlook in terms of the number of international students and staff and global collaborations (weightage, 7.5 percent) and industrial knowledge transfers (2.5 percent).

In order to assess teaching, one of the criterion is the student-to-staff ratio (proxy for student-to-teacher ratio) in the university, which has been given a weightage of 4.5 percent.

In the Times Higher Education World University Ranking, 2018, of the top 100 universities with the best student- to-staff ratio, Japan dominates the list with 34 universities, followed by the US with 25 universities.

These are the Tamil Nadu Agriculture University, GB Pant University of Agriculture and Technology, Pantnagar and the Indian Institute of Science, Bengaluru.

India has consistently faced the challenge of shortage of faculty in its universities and colleges.

According to the 2018 Parliamentary Standing Committee Report on Human Resource Development, “Demand for Grants 2018-19 of the Department of Higher Education”, approximately 35 percent of teaching positions at various central universities under the purview of UGC are lying vacant (1,323 professors, 2,217 associate professors, 2,457 assistant professors).

After taking in account ad-hoc, guest faculty, contract and re-employed positions, the unfilled posts work out to 19 percent.

One of the reasons responsible for faculty shortage is because teaching these days has become a low preferred sector for jobs. Students find teaching jobs less paying compared to the other sectors, coupled with lack of research and career enhancement opportunities.

With contractual jobs being the nature of open faculty positions in the universities and colleges, graduates reason job security and the other monetary benefits they would have to trade off by choosing the academic profession over the other jobs.

One of the criterion for appointment/promotions in teaching to the level of professor/associate professor, is a doctoral degree in the related discipline.

Looking at the enrollment for PhD. courses in India, the number of students pursuing PhD. have registered an increase from 0.1 million in 2013-14 to nearly 0.2 million in 2017-18 (AISHE,2017), which is a positive development from the viewpoint of the supply of the qualified staff for teaching.

The main question arises as to what strategies should be adopted to retain these qualified candidates in the teaching profession in India?

The article was published with DNAon January 8, 2018