Power Sector Reforms: The story of UDAY so far

Home Power Sector Reforms: The story of UDAY so far 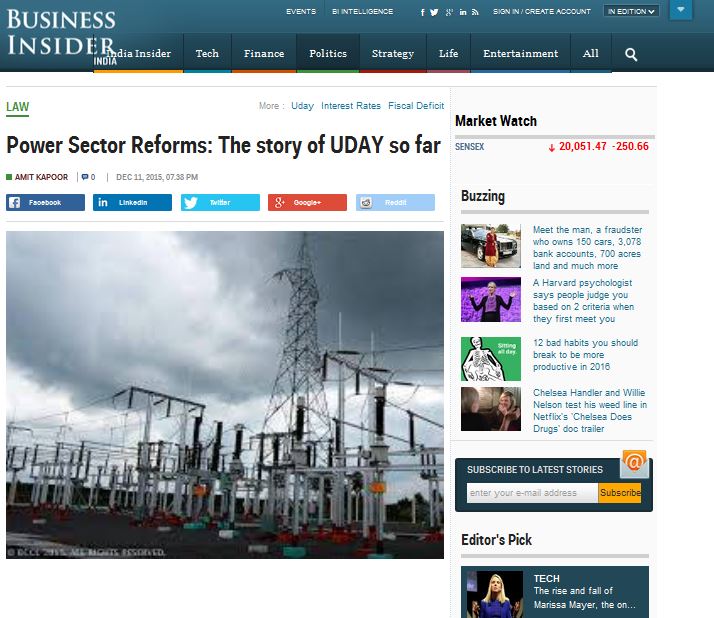 Power Sector Reforms: The story of UDAY so far

More than a month has passed since the cabinet gave its approval to the Ujwal DISCOM Assurance Yojana or UDAY for short. The scheme has certain salient features that will help India’s growing power sector face one of its most challenging problems.

The scheme comes forth at a time when DISCOMs have seen accumulated losses soaring to 3.8 lakh Crores and an outstanding debt of approximately Rs. 4.3 lakh Crore (as on March 2015). Just to put these numbers in perspective, the outstanding debt is close to twice the defence budget of the country at present. A question that naturally arises is what made things come to such a pass? The fact is DISCOMs have been facing problems for a long time now. However, the financial problem that DISCOMs have been facing became acute in the past 4-5 years as they began funding their operational losses by taking on more debt. Debt restructuring for DISCOMs have happened in the past but this time, it appears the government is keen on finding a long-term solution to the problem. Debt at present comes with interest rates hovering as high as 15%. This high interest cost has trapped DISCOMs in a vicious debt cycle. Due to this the banks, have seen their NPA’s rise that is a cause of concern for both the banks and the RBI.

The scheme thus comes at an opportune time and tries to resolve these legacy issues of the Power sector in the next 2-3 years by a four-pronged approach.

First, it seeks to improve the operational efficiencies of the power DISCOMs. It is proposed to be done through proper metering, up-gradation to energy efficient modes like usage of LED’s the prices for which have already seen a tremendous downward spiral. Prices of LEDs have seen a tremendous downward spiral due to the removal of supply-side bottlenecks and with that economies of scale bringing prices further down. The measures to improve operational efficiency are done with a view to reducing the average AT&C losses from the present 22 percent to a target of 15 percent by 2018-19.

Second, the scheme proposes a reduction in the cost of power. It is a step that would require improvements across the upstream side of value chain right from the fuel supply to improvements in generation technologies and betterment in the existing and addition of new transmission line infrastructure. The government is keen to bring in improvements in these. In the previous year, the power sector has seen the highest production growth in coal sector as well as the highest capacity addition in the generation and highest ever transmission line additions.

Third, the scheme seeks to reduce the interest cost of DISCOMs. It is to be done by asking states to take over 75 percent of the debt of DISCOMs as on 30 September 2015. The 75 percent debt is in line with the recommendations of the Fourteenth Finance Commission. The scheme proposes it to be done in 2 Phases- the first 50 percent to be taken over in 2015-16 and the rest 25 percent to be taken over by 2016-17. It is expected that this will reduce the interest cost by an estimated 6-7 percent thus disrupting the debt trap in which the DISCOMs seem to be stuck at present.

Finally, the scheme seeks to enforce financial discipline in DISCOMs by aligning them with states’ finances. The initial years will see the fiscal space remaining the same for states even when they take over the debts. It is to be done by ensuring that for the initial two years evaluation of debt in the fiscal deficit does not take place. Also, the scheme proposes to make the states accountable by giving them the power to take over and fund at least 50 percent of the future losses (if any) of the DISCOMs in a graded manner.

The scheme is optional and has so far seen has seen enrolment by nine states according to the official Twitter handle of the Power Minister. The scheme overall seems well thought through and is not just a restructuring package but a major reform that will help secure power for all citizens. In the process, it is hoped it will forever change the dynamics of DISCOMs in the country. Other sectors need to bring in such ‘reforms’ to make the states and well as India globally competitive.

Published in Business Insider on December 11, 2015. To know more