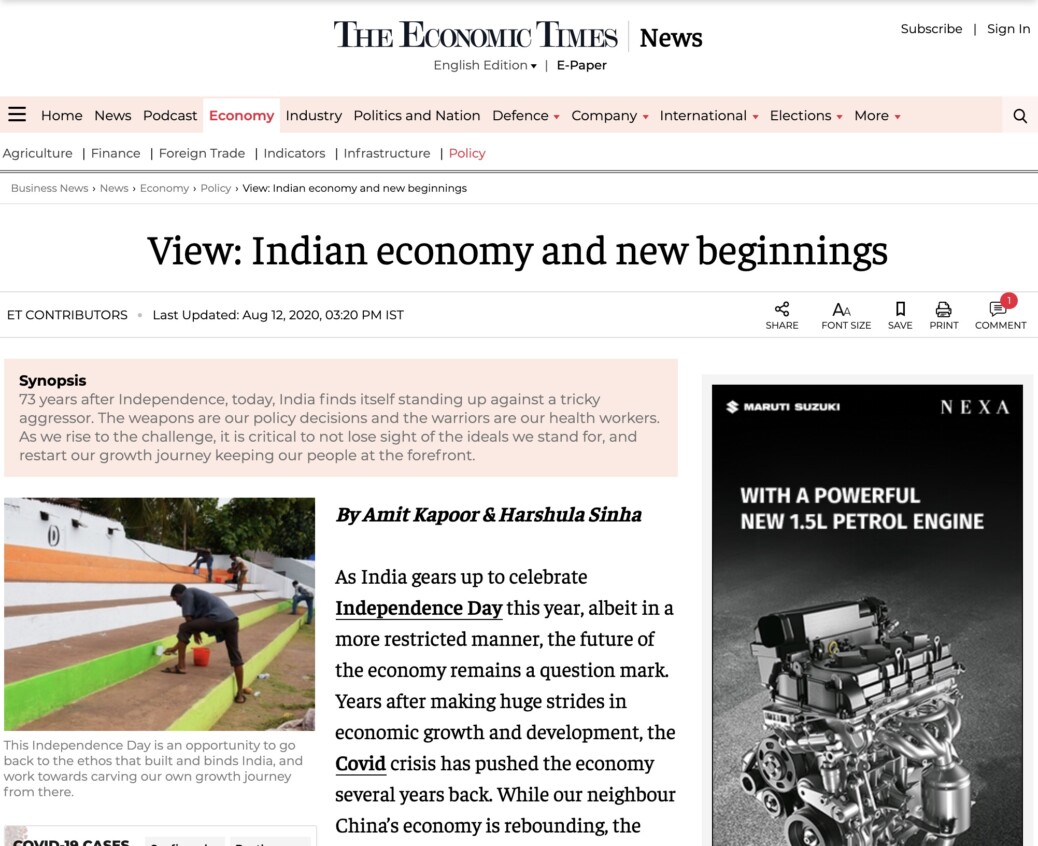 As India gears up to celebrate Independence Day this year, albeit in a more restricted manner, the future of the economy remains a question mark. Years after making huge strides in economic growth and development, the COVID crisis has pushed the economy several years back. While our neighbor, China’s economy is rebounding, the mounting cases in India and re-imposition of local lockdowns continue to block sustained economic recovery. However, as much as we are wont to compare the two countries, it would be unfair to do so. Both are at different stages of the pandemic, have different demographic characteristics and have vastly different sociopolitical systems in place. It is for this very reason that comparisons between both economies need to ends as well.

Since the time both the countries gained independence, comparisons have been rife. Both walked down parallel economic paths for a long time, struggling on their developmental journey through famines and policy mishaps, particularly in the ‘60s. Today, both are economic giants, but the similarity stops there. While their economic outcomes have been broadly similar, the oft-compared nations have always trodden wholly different paths in terms of political systems and economic policies.

Today, China’s growth has far outstripped India’s, but any comparison between the two boils down to the fact that one is an authoritarian state while the other a democracy. Democracy indeed slows down processes but it has its own merits that authoritarianism lacks. If economic growth were the only goal to work towards, China would have been a model state, but it is not. Democracy allows everyone to participate in governance, and while it may bring down our pace of economic growth, it prioritizes spreading the benefits of development among all. In the end, economic growth is only a means to progress and better standards of life. In other words, India has chosen the righteous path, however cumbersome it may seem from time to time, which does not warrant a comparison with China.

This Independence Day is an opportunity to go back to the ethos that built and binds India, and work towards carving our own growth journey from there. Unlike China, India has chosen democratic capitalism. It has chosen a political system that is built on the foundation that everyone has equal rights and an economic system that inherently creates inequalities if left to its own devices. India has a whole set of separate challenges- to balance the two and not let one undermine the other. Striking this delicate balance is not a challenge faced by China, and hence India too has to stop looking towards China and deal with the challenges in way of economic growth the way a democracy does.

As our economy also revisits the idea of self-reliance (Atmanirbhar Bharat), it is important to remember that domestic markets cannot thrive just by restricting the access of global competitors to our market but it also requires buttressing the free market with strong institutions. Without institutions to put in the checks and balances, the capitalist excesses threaten the ethos of democracy, that is, equal opportunities to all, the freedom to enter markets and compete. Competition and innovation suffer if the institutions are weak enough to not protect property rights and enforce contracts.

According to the economist Dani Rodrik, free markets cannot stand on their own without a wide range of institutions, both market-creating and market-supporting institutions. At a time when the economy has sustained considerable damages from this health crisis, and looks to rebuild and create new beginnings, this is an important reminder. But the institutions can only be as strong as the democracy. If the state is responsible for regulating the market, democracy and democratic institutions are imperative in ensuring that the state does not escape this responsibility.

Russia is an example of embracing free markets without strengthening democratic institutions. After the fall of the Soviet Union, the government rushed to sell state-owned holdings to a handful of businessmen, and the result has been unchecked capitalism and high inequality. The free market is still operating, but it has hardly made a difference to a large part of the population who are still excluded from receiving the benefits of development.

The Indian economy stands at a vulnerable position today, and if the pandemic has taught us one thing, it is that the economy needs people as much as the people need the economy. Democracy and capitalism may seem as opposing forces, as the conflict between businesses and communities have often highlighted at times, the delicate balance can be achieved if institutions are in place that allow capitalism to thrive as well as restrict the excesses. It is a more sustainable and equitable way to transition to a market-driven economy.

Further, when the idea of democracy pervades the country, the businesses are also informed by democratic values. They are then able to exercise self-regulation, support their business ecosystems, ensure fair competition and work in harmony with their communities.

73 years after independence, today, India stands up against another aggressor, but it is trickier this time around, the weapons are our policy decisions and the warriors are our health workers. As we rise to the challenge, it is critical to not lose sight of the ideals we stand for, and restart our growth journey keeping our people at the forefront.

The article was published with Economic Times on August 12, 2020.