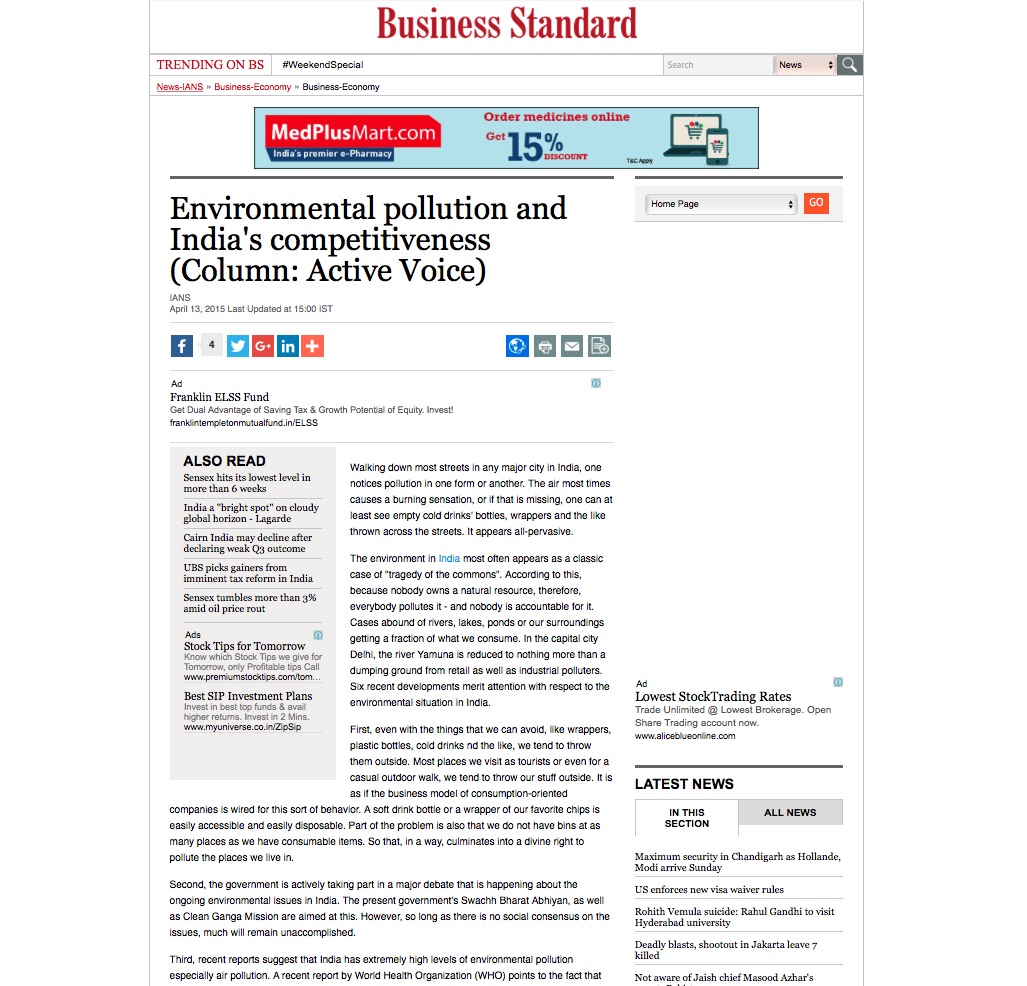 Walking down most streets in any major city in India, one notices pollution in one form or another. The air most times causes a burning sensation, or if that is missing, one can at least see empty cold drinks’ bottles, wrappers and the like thrown across the streets. It appears all-pervasive.

The environment in India most often appears as a classic case of “tragedy of the commons”. According to this, because nobody owns a natural resource, therefore, everybody pollutes it – and nobody is accountable for it. Cases abound of rivers, lakes, ponds or our surroundings getting a fraction of what we consume. In the capital city Delhi, the river Yamuna is reduced to nothing more than a dumping ground from retail as well as industrial polluters. Six recent developments merit attention with respect to the environmental situation in India.

First, even with the things that we can avoid, like wrappers, plastic bottles, cold drinks nd the like, we tend to throw them outside. Most places we visit as tourists or even for a casual outdoor walk, we tend to throw our stuff outside. It is as if the business model of consumption-oriented companies is wired for this sort of behavior. A soft drink bottle or a wrapper of our favorite chips is easily accessible and easily disposable. Part of the problem is also that we do not have bins at as many places as we have consumable items. So that, in a way, culminates into a divine right to pollute the places we live in.

Second, the government is actively taking part in a major debate that is happening about the ongoing environmental issues in India. The present government’s Swachh Bharat Abhiyan, as well as Clean Ganga Mission are aimed at this. However, so long as there is no social consensus on the issues, much will remain unaccomplished.

Third, recent reports suggest that India has extremely high levels of environmental pollution especially air pollution. A recent report by World Health Organization (WHO) points to the fact that India is home to 13 of the top 20 cities for air pollution. It is because India’s air has a lot of PM (particulate matter) 2.5 that is instrumental in a large number of lung ailments. The health risks of living in such a toxic environment cannot be overstated. These include the onset of asthma and cancer as well as triggers to heart attack and stroke. Most of the diseases reduce life expectancy and cause losses in the productive capability of a nation. The collective impact of pollution is thus detrimental and not just limited to quality of life today but for the future as well.

Fourth, much can be done at this stage to reduce pollution. It does not necessarily mean blocking projects that are critical to national development but bringing in stringent guidelines for automobile manufacturers to comply with stricter pollution standards. It also means bettering public transport systems, especially MRTS (Mass Rapid Transport Systems), for people to migrate to them. These would help reduce the toxic levels that we see today in our urban centers. The scrapping of the diesel subsidy is a step in the right direction as it makes it costlier to consume the fuel.

Fifth, acknowledgement of the problem is a must for being in a position to solve it. In this regard, the recent National Air Quality Index (AQI) is also a step in the right direction. The index has uniform six categories – Good, Satisfactory, Moderately polluted, Poor, Very Poor, and Severe. The AQI also considers eight pollutants (PM10, PM2.5, NO2, SO2, CO, O3, NH3, and Pb) for which short-term (up to 24-hourly averaging period) National Ambient Air Quality standards are prescribed. It makes the AQI robust. Hopefully in the coming years, the Index helps policymakers and citizens decide which road to take for development.

Sixth, India’s rank on global indices like the Social Progress Index (SPI) is a cause of concern. The Index goes beyond pure GDP measures and looks at social and environmental measures that are imperative for social progress and quality of life. No wonder that the recently released SPI ranks India at a dismal 101st position out of 133 countries considered for the Index. Striking underperformance is observed in the Index under ‘household pollution’ (110th rank) and ‘health and wellness’ dimensions (120th rank) factors.

All this reflects the need is to look at the environment in a holistic manner. The path taken by other countries, particularly America, for personal fulfillment and growth over the past few centuries may not be appropriate for India at this juncture with the kind of population and resources that we have. Also, a sense of civic duty towards our surroundings will contribute to making the country clean. More importantly it will also make people healthy and productive. It may indeed unleash the ‘demographic dividend’ that will boost growth and competitiveness.

Published in Business Standard on April 13, 2015. To know more