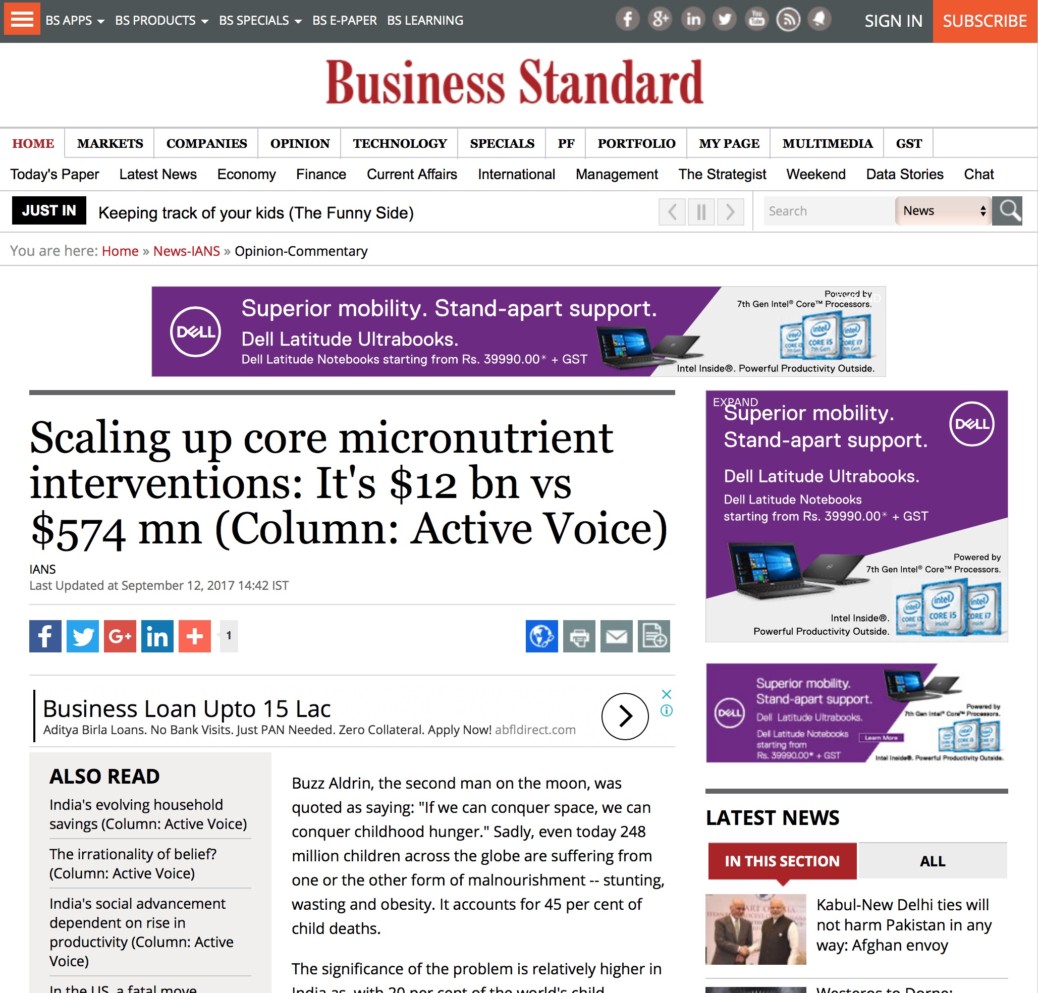 Buzz Aldrin, one of the first two people to land on the moon, was quoted saying “If we can conquer space, we can conquer childhood hunger.” Sadly, even today 248 million children across the globe are suffering from one or the other form of malnourishment, i.e., stunting, wasting and obesity. It is the contributing factor for 45 percent of the child deaths.

The significance of the problem is relatively higher in India as the country that constitutes 20 percent of the world child population has one of the highest malnutrition rates in the world. The root of the problem lies in gross negligence of public investment in healthcare facilities, let alone a focussed intervention in child health amenities. Public expenditure on health, as a percentage of total health expenditure has hovered between 25 – 30 percent in the last decade, while the world average stood at 60 percent. As a matter of fact, only sixteen countries have a lower public expenditure on healthcare than India.

The inadequacy of government intervention in healthcare is clearly reflected in the country’s performance in child health indicators. As an extension of the fact that the country has the highest levels of malnutrition, India also has the highest number of stunted children in the world. The other aspects of malnutrition are no better off. A high proportion of children with anaemia, low weight, lower levels of breast feeding and evolving problems of obesity are also equally concerning. The percent of anaemic children, although depicting a declining trend, is still at 58.4; the percentage of overweight children increased to 6.1 percent in 2014; and finally, there has also been a rise in wasted children by 1.2 percentage points during the last decade.

Over the years, India has suffered heavy economic losses due to such absurd levels of malnutrition among its citizens. Any aspect of malnutrition directly impacts a person’s productivity levels affecting their economic viability. According to World Bank estimates, productivity losses due to malnutrition are more than 10 percent of lifetime individual earnings, i.e. about 2-3 percent of GDP. Annually, India loses over US$12 billion in GDP to vitamin and mineral deficiencies.

This is because children who are undernourished show lower activity levels and reduced attention. Studies show that low weight at birth and stunting can reduce a child’s IQ by 5 points. In addition, anaemia and other deficiencies can have irreversible damages on a child’s ability to learn. A recent World Bank study found that stunting among children in India reduces their per capita income by 13 percent. Since two-thirds of India’s current workforce was stunted in childhood, the economic losses that the country has borne due to it through generations is unimaginable.

The issue gets even more complicated for nutritional deficiencies in a girl child. Malnourishment in a girl combined with the Indian trend of early marriage has a cascading effect of health complexities across generations. Data by National Family Health Survey suggests that 26.8 percent of the women in India are married before 18 years. Childbearing at an early age can cause nutritional deficiencies in the womb and increase the risk of death by 2-10 times. Moreover, 41.4 percent of the mothers do not receive any antenatal care during their first trimester. This induces other risks associated with mineral deficiencies in the womb such as blindness, dwarfism and also chronic diseases like diabetes in adulthood.

There is also a tendency among Indians to avoid hospitals due to the high out of pocket expenditure during delivery. The average out of pocket expenditure per delivery in a public healthcare system in rural areas is almost ₹3000, where 75 percent of the population earns less than ₹5000 a month. Such excessive costs of child and maternal care leads to a widespread inclination to evade hospitals for childbirth, which results in health complications among children and even death.

The potential gains from addressing these issues will far exceed the costs incurred. As against the US$12 billion that the country loses to nutritional deficiencies each year, scaling up core micronutrient interventions would cost less than US$ 574 million annually.  Research suggests that $1 spent on nutritional interventions in India could generate $34.1 to $38.6 in public economic returns, three times more than the global average. This makes boosting nutrition levels across the country one of the biggest low hanging fruit in the Indian public policy sphere.

The article was published with Business Standard on September 13, 2017.