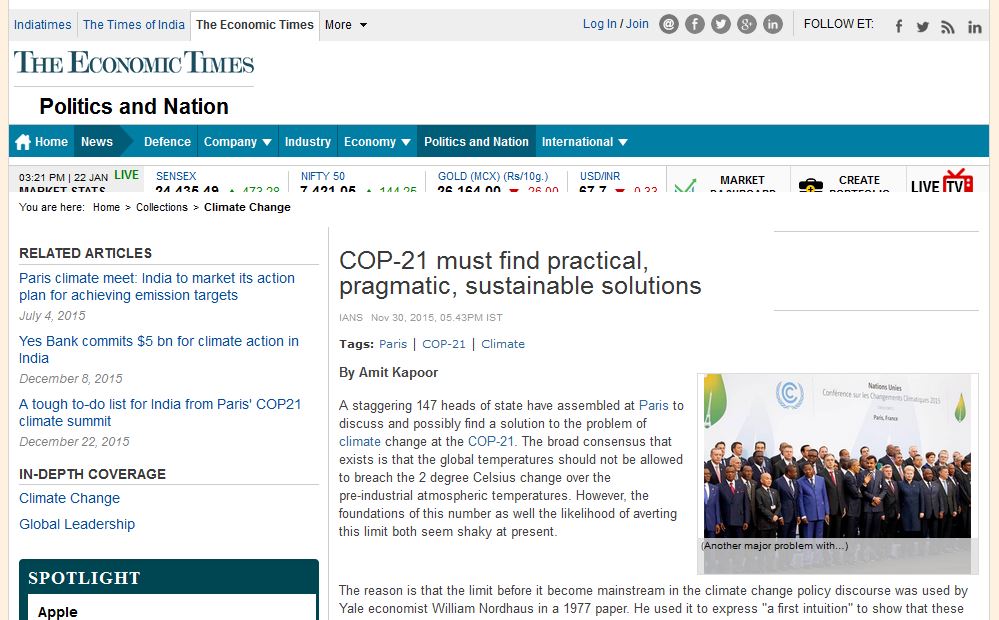 A staggering 147 heads of state have assembled at Paris to discuss and possibly find a solution to the problem of climate change at the COP-21. The broad consensus that exists is that the global temperatures should not be allowed to breach the 2 degree Celsius change over the pre-industrial atmospheric temperatures. However, the foundations of this number as well the likelihood of averting this limit both seem shaky at present.

The reason is that the limit before it become mainstream in the climate change policy discourse was used by Yale economist William Nordhaus in a 1977 paper. He used it to express “a first intuition” to show that these levels “would take the climate outside the range of observations which have been made over the last several hundred thousand years”.

Post this, several conferences and resolutions have been passed but little serious commitment is observed from most stakeholders. In 2010, the Cancun Agreements committed the governments to hold the increase in global average temperature below 2 degrees. However, the limit in itself is arbitrary. It is used though as it serves as an important benchmark for governments to commit to measurable targets. Also, it forces the global leadership and national leadership to find solutions within this 2 degree limit.

Another major problem with the 2 degree limit is that it does not take into account the historical contribution so far that countries have made. This makes it even more difficult to reach a consensus on the limit. Developing countries like India have argued that since they have not contributed to climate change in a massive way in the past 150 years, why are they being pressurized to reduce carbon emissions in the same way developed countries have been asked to do? It is a question of fairness, they argue. India goes further to talk about the issue of “climate justice” to its 300 million people who do not have access to electricity. The government has the mandate to resolve the “power poverty” of its people in this regard. Development and access to power for citizens cannot be held hostage to international relations and obligations. This is where developing countries like India find themselves in a spot of bother, as reducing dependence on coal at present simply looks impractical.

This is because coal is at present the cheapest source of producing power and India has abundant reserves of it. Another important point is that governments have to subsidize new and renewable energy that make them environmentally good but financially costly.

The solution that countries like India seem to look at is boosting the renewable capacity over the next few years more than the coal output increases. It is a pragmatic stance since it increases the output of Co2 emissions but at the same time looks to move towards renewable energy more so than ever before and more than coal.

The leaders have already submitted their countries’ Intended Nationally Determined Contributions (INDCs) to COP-21. India has pledged to reduce its emissions by an estimated 33-35 percent by 2030 down from its 2005 level. It aims to do so by focusing on solar and wind energy. It is estimated that the funding requirement to achieve this would be close to $2.5 trillion.

The leaders that have gathered in France must find solutions that are practical, pragmatic and sustainable. The best way forward is to commit to investing in R&D and radical innovation in solar and other renewable energy sources, both in the developed and developing countries. From the point of view of developing countries, the issue of equity and access to power for their citizens are of critical importance. All the leaders must look at finding solutions by investing in energy technologies that are novel and less polluting.

Published in The Economic Times on November 30, 2015. To know more