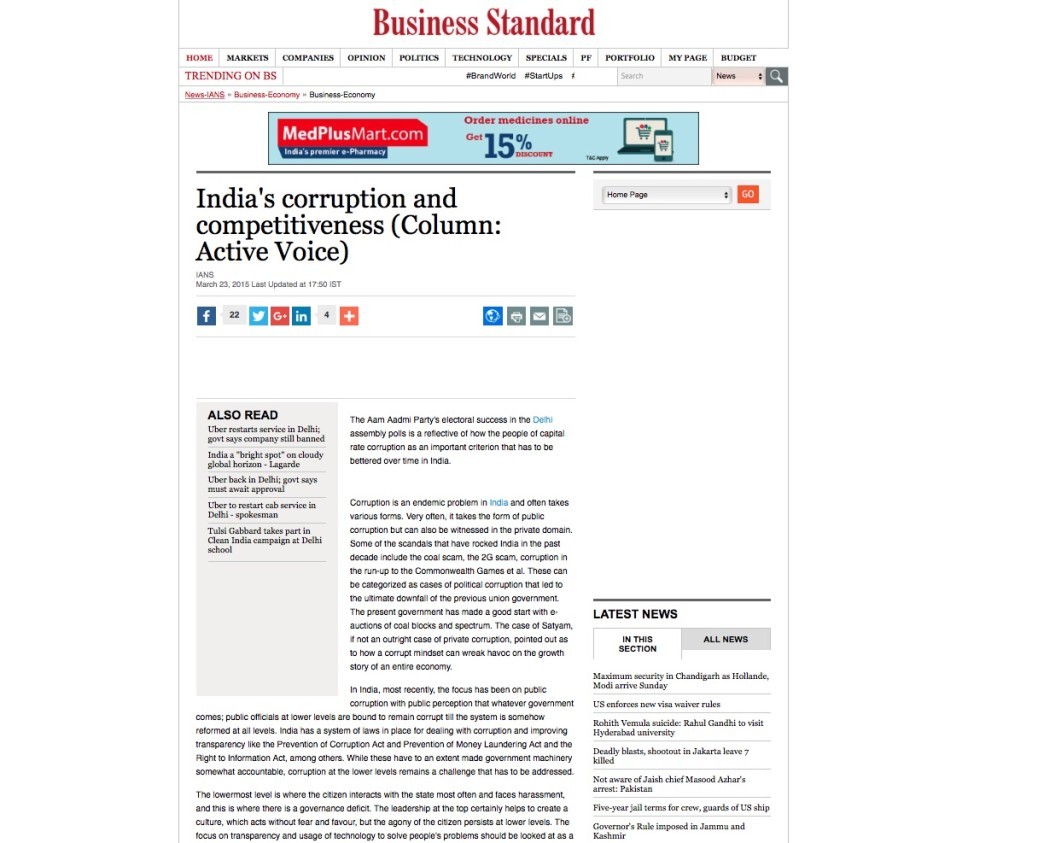 The Aam Aadmi Party’s electoral success in the Delhi assembly polls is a reflective of how the people of capital rate corruption as an important criterion that has to be bettered over time in India.

Corruption is an endemic problem in India and often takes various forms. Very often, it takes the form of public corruption but can also be witnessed in the private domain. Some of the scandals that have rocked India in the past decade include the coal scam, the 2G scam, corruption in the run-up to the Commonwealth Games et al. These can be categorized as cases of political corruption that led to the ultimate downfall of the previous union government. The present government has made a good start with e- auctions of coal blocks and spectrum. The case of Satyam, if not an outright case of private corruption, pointed out as to how a corrupt mindset can wreak havoc on the growth story of an entire economy.

In India, most recently, the focus has been on public corruption with public perception that whatever government comes; public officials at lower levels are bound to remain corrupt till the system is somehow reformed at all levels. India has a system of laws in place for dealing with corruption and improving transparency like the Prevention of Corruption Act and Prevention of Money Laundering Act and the Right to Information Act, among others. While these have to an extent made government machinery somewhat accountable, corruption at the lower levels remains a challenge that has to be addressed.

The lowermost level is where the citizen interacts with the state most often and faces harassment, and this is where there is a governance deficit. The leadership at the top certainly helps to create a culture, which acts without fear and favour, but the agony of the citizen persists at lower levels. The focus on transparency and usage of technology to solve people’s problems should be looked at as a solution at lower levels. It has to do with public officials like police officials as well as in the lower level judiciary as well as a clerk in a government department and their attitude towards the citizens of India.

The Merriam-Webster dictionary defines corruption as ‘impairment of integrity, virtue, or moral principle’. Thus, it is not just a social and economic problem but at a deeper level a moral one. One may ask why does one pay a bribe? The answer may be because of getting things done quickly (speed money) or because it has become institutionalized within the system (Think of the money given for registering a property). It also could be because the economic cost of paying a bribe that is lesser than the actual fine/tax. (Think of motor vehicle challans that one gets away with a payment of Rs.50-Rs.100 to the traffic police). Corruption often manifests itself in various ways.

There is a significant link between corruption and capital flight. The December 2014 report by Global Financial Integrity (GFI), a research organization based out of Washington, talks about illicit financial outflows from developing countries. The estimates suggest that India had the fourth highest cumulative outflows from a period of 2003-12. India’s outflows were $439 billion, compared to $1.252 trillion for China, $973 billion for the Russian Federation, $514 billion for Mexico, $394 billion for Malaysia and $217 billion USD for Brazil. These outflows represent the lost capital and investment which could have been utilized for growth and competitiveness of these economies.

Some other factors that have a bearing on investment within the country are the perception of corruption, perception of institutions affected by corruption and citizen’s role in tackling corruption. Transparency International, an anti-corruption watchdog does the annual Corruption Perception Index on which in the previous year India ranked 85th out of 170 countries. India’s score on the corruption perception Index was 38 (up from 36 last year) on a scale of 1-100 where 1 represents highly corrupt and 100 least corrupt. The Nordic countries do extremely well on the Index while most part of Asia and Africa does fare relatively poorly. According to the Global Corruption Barometer 2013 of the same organization, 86 percent of the respondents in India felt that political parties were the corrupt/extremely corrupt. Similarly, in the same barometer, the military was thought to be least corrupt with only 20 percent respondents believing that the military was corrupt/extremely corrupt. An astounding 62 percent and 61 percent reported paying a bribe to the police and the registry and permit services respectively.

All this goes on to show that though laws exist in India, corruption persists. Internationally corruption dents a country’s image and causes investor’s confidence to go down while also causing illicit financial outflows. It acts as a hindrance to bettering the country’s competitiveness, transparency and ease of doing business. It would be heartening to see how the present union government and the elected AAP government in Delhi tackle the phenomenon of corruption. Winning the crusade against corruption will require active public participation. We are hopeful with 55 percent ordinary people (as per Transparency International’s Global Corruption Barometer 2013) feeling that they can make a difference in the fight against corruption. In the years to come this number should increase so that we fight and reduce corruption with the twin swords of public participation and consensus and laws preventing corruption.

Published in Business Standard on March 23, 2015. To know more