Biotechnology can be Indian economy’s next success story

Home Biotechnology can be Indian economy’s next success story 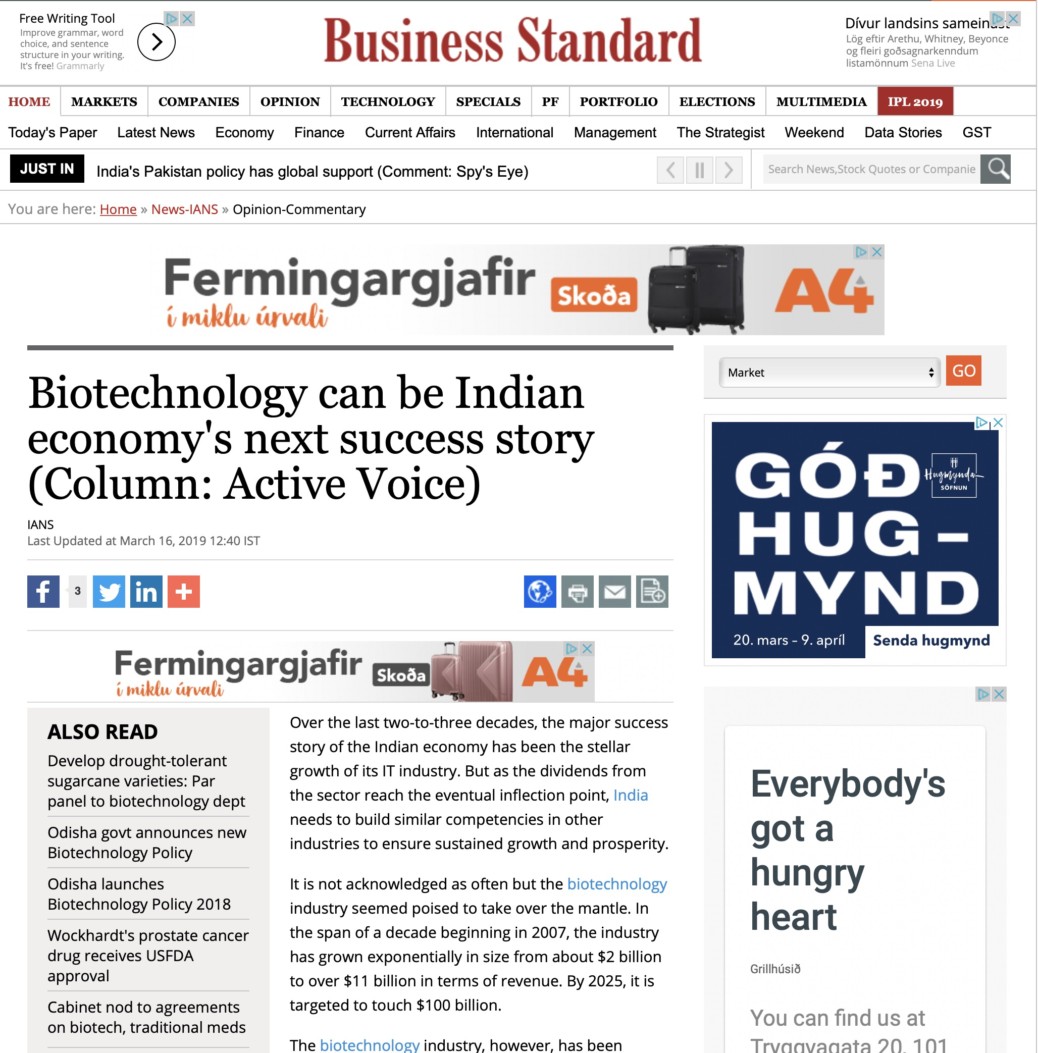 Over the last two-to-three decades, the major success story of the Indian economy has been the stellar growth of its IT industry. But as the dividends from the sector reach the eventual inflection point, India needs to build similar competencies in other industries to ensure sustained growth and prosperity.

It is not acknowledged as often but the biotechnology industry seemed poised to take over the mantle. In the span of a decade beginning in 2007, the industry has grown exponentially in size from about $2 billion to over $11 billion in terms of revenue. By 2025, it is targeted to touch $100 billion.

The biotechnology industry, however, has been impacting Indian lives long before it grew so much in size. Back in the mid-1960s, advancements in biotechnology drove the Green Revolution, which enhanced farm yields and made the country self-sufficient in food production.

A similar contribution from the sector was witnessed in the White Revolution when India became a milk-surplus nation and improved the nutrition level of its citizens.

More recently, the meteoric growth of the Indian pharmaceutical industry is a result of process innovation that has given the country a cost advantage in the manufacture of drugs.

Further, the growing energy needs of India’s rural areas have been increasingly met by biomass fuel.

These outcomes have been the result of years of concerted efforts by the Indian government to enable the growth of the industry. As early as 1986, Rajiv Gandhi, recognising the potential of biotechnology in the country’s development, set up the Department of Biotechnology, making India one of the first countries in the world to have a government department solely dedicated to biotechnology.

Over the years, the Department of Biotechnology has set up 17 Centres of Excellence at higher education institutions across the country and has supported the establishment of eight biotechnology parks across different cities. The biggest contribution of the department has been in setting up of the Biotechnology Industry Research Assistance Council (BIRAC) in 2012, which has successfully supported 316 start-ups in its six years of existence.

Due to these efforts, the Indian biotechnology industry has flourished over the years. As of 2016, India had over a thousand biotechnology start-ups. To put matters in perspective, Australia has a total of 470 biotechnology companies. More than half of these start-ups are involved in healthcare – drugs, medical devices and diagnostics – while about 14 per cent are in agricultural biotechnology and about 18 per cent in biotechnology services.

The Indian economy also has a distinct advantage with respect to its demography that can ensure sustained growth for the sector. More than half the Indian population is below the age of 25. On a global scale, the median age in India (26.5 years) is much below that of China (35.9 years) and the US (37.1 years). An effective utilisation of this demographic advantage will provide India a competitive edge over all other emerging economies in the advancement of biotechnological research and development.

However, a few challenges need to be addressed if India is to fuel the growth of its biotechnology industry and achieve its target of making it a $100 billion industry by 2025. First, India’s research and development expenditure is quite low at 0.67 per cent of GDP, not only compared to mature biotechnology economies such as Japan and the US (which stands at around 3 per cent) but also in comparison to emerging economies like China (which is at around 2 percent).

Second, and more specific to the biotech pharmaceutical sector, there are a few India-specific challenges with the country’s IP regime. There are two main areas of contention for the industry in India’s approach to intellectual property. The first issue lies in Section 3(d) of the Patents (Amendment) Act, 2005, which sets a higher standard for patentability than mandated by TRIPS. The industry argues that India’s stricter standards for patents discourages innovation and dampens foreign investment. The second issue is that of compulsory licensing, which gives the government power to suspend a patent in times of health emergencies. Although India has used this option only once, the industry feels that such regulations keep investors clear of Indian markets.

A third challenge lies in the risk involved in the Valley of Death, that is, the risk of failure in the transition of innovative products and services from discovery to marketisation. Most of the early research funding, often provided by universities or the government, runs out before the marketisation phase, the funding for which is mostly provided by venture capitalists. It becomes difficult to attract further capital between these two stages because a developing technology may seem promising, but it is often too early to validate its commercial potential. This gap has a huge impact in commercialisation of innovative ideas.

Thus, the Indian government needs to act on these challenges facing the biotechnology sector. An increase in investment towards research and development and building human capital is the most crucial point of action. These initiatives have shifted growth trajectories of countries like China away from India. As for the challenging IP regime, the government needs to come together with the biopharma industry and chalk out a middle ground that recognises the value of innovation and does not hurt its investment attractiveness. Finally, for the Valley of Death concerns, the government can build a mechanism where funding can be provided for select innovative ideas based on their national importance. Only such action-oriented steps can make biotechnology the next success story of the Indian economy.

The article was published with Business Standardand Outlook Indiaon March 16, 2019.