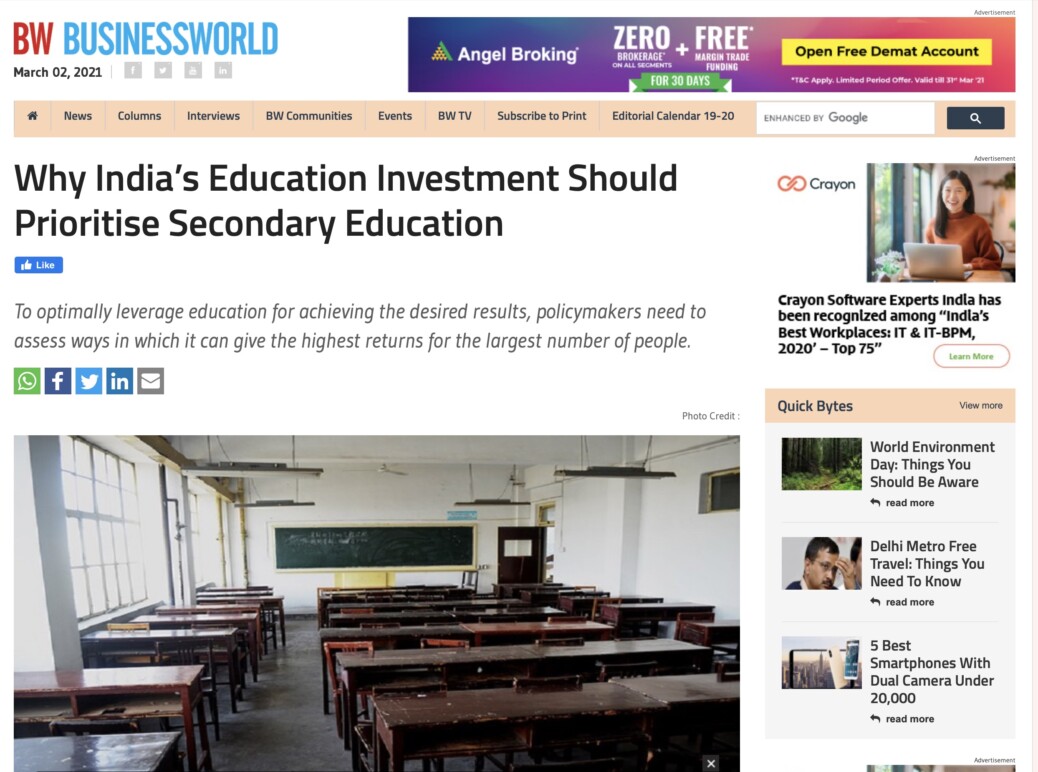 To optimally leverage education for achieving the desired results, policymakers need to assess ways in which it can give the highest returns for the largest number of people.

Notwithstanding the negative effects of the pandemic, as India persists with its goal of becoming a 5 trillion-dollar economy, it is imperative to utilise its resources to the hilt. In this regard, education is one of the most promising resources at our disposal. According to the Human Capital Theory, education is an investment that gives both private returns in the form of higher earnings in the future as well as social returns in the form of high economic growth and poverty eradication. To optimally leverage education for achieving the desired results, policymakers need to assess ways in which it can give the highest returns for the largest number of people.

To arrive at their rate of returns to schooling, the value of an average individual’s lifetime earnings for is equated with the cost of education. Calculation made at individual levels give the private rate of return to education, while calculations that incorporate social costs such as money spent on schools and teachers give the social rate of return. As per latest estimates, the global average of the private rate of return to an additional year of schooling is approximately 8.8 percent, which is much higher than most long-term asset investments. The patterns in rate of return also depend on the level of development in a country. Returns are usually found to be higher in developing countries. They also exhibit higher returns to primary education whereas the developed economies exhibit higher returns to tertiary education.

Trends in returns to education have implications for policymaking and investment decisions. To take the case of India, it deviates from the norm by exhibiting higher returns to tertiary education despite being a developing country. We, at the Institute for Competitiveness, calculated the returns to education in India using the Periodic Labour Force Survey (PLFS) data published by the National Sample Survey Office (NSSO). As per our estimates, the rates of return to primary (I-V), secondary (VI-X), higher secondary (XI-XII), and tertiary education stand at 4.2 percent, 2 percent, 5.4 percent, and 6.7 percent, respectively. This implies that investment in primary education is not giving as much returns as it does in other developing countries.

Primary education investment in India is reaching its saturation point, which is partly attributable to high supply of primary graduates in labour market and technological progress that favour high-skilled labour. Such trends make a case for increasing efforts towards enrolment in post-primary education. However, since returns to secondary education are the lowest, it is crucial to maintain the high transition rates after secondary education up to higher secondary, in order to enhance the earning potential of individuals.

These peculiar trends in India are also a reflection of increasing inequality. The high returns to primary education allow individuals in developing countries to come out of poverty, while the diminishing rates of return after primary education ensure that an additional year of schooling does not create huge wage gaps between primary graduates and tertiary graduates. Since this is not the case in India, investment in education can potentially increase the existing inequalities.

The article was published with Business World on February 14, 2021.