Universal basic income in Budget? Here’s why it shouldn’t be disruptive like demonetisation

Home Universal basic income in Budget? Here’s why it shouldn’t be disruptive like demonetisation 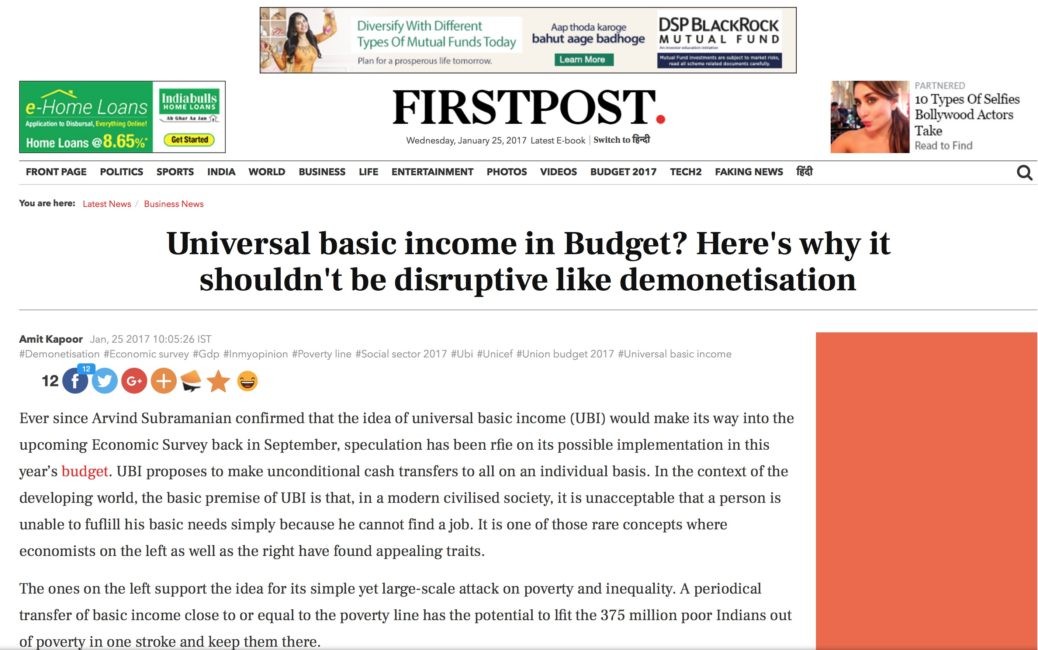 Ever since Arvind Subramanian confirmed that the idea of universal basic income (UBI) would make its way into the upcoming Economic Survey back in September, speculation has been rife on its possible implementation in this year’s budget. UBI proposes to make unconditional cash transfers to all on an individual basis. In the context of the developing world, the basic premise of UBI is that, in a modern civilised society, it is unacceptable that a person is unable to fulfill his basic needs simply because he cannot find a job. It is one of those rare concepts where economists on the left as well as the right have found appealing traits.

The ones on the left support the idea for its simple yet large-scale attack on poverty and inequality. A periodical transfer of basic income close to or equal to the poverty line has the potential to lift the 375 million poor Indians out of poverty in one stroke and keep them there.

While on the right, proponents of basic income cherish the idea of bypassing the mess of bureaucracy with direct income transfers and enhancing personal liberty by letting individuals choose their spending. Lesser bureaucratic and political involvement in the distribution of funds minimises the scope for corruption and leakage, which is a major drawback of government schemes like MGNREGS and PDS.

Likewise, giving people the freedom to spend their basic income as they wish, reduces the paternalistic nature of governments and gives them greater economic freedom. The benefits of UBI are aplenty and even go along with the political narrative of the government to combat corruption and ensure “minimum government, maximum governance”.

However, regardless of whether the government will implement UBI in this budget or the future, there are a few things that need to be taken into consideration.

First, is the issue of finance. A lot of recent debates have been around the ways and means in which the government can fund the scheme. The most popular of these comes from Pranab Bardhan, a professor of the University of California, who has been the most vocal proponent of UBI in India. He estimates that India can provide a basic income of ₹10,000 per person per year at the cost of 10 percent of the country’s GDP just by cutting down on subsidies to the better-off sections of the society and eliminating corporate tax exemptions. However, his calculations are based on a report published by National Institute of Public Finance and Policy (NIPFP), which was published in 2003 and used 1998 figures. Even if the old figures are taken as a good approximation of the current situation, the cost is simply too high to be sustainable.

In times of recession, such a high fiscal burden can become unmanageable. Moreover, this money can be more effectively used to improve public services like health, education, police, and courts; all of which are in dire need of additional investment. Vijay Joshi, an Oxford economist, proposes a more modest cost of 3.5 percent of GDP in his latest book, “India’s Long Road: The Search for Prosperity”. This can provide a cash transfer of one-fifth the poverty line to everyone (₹3,500 per person per year). Nevertheless, it is questionable if a basic income of approximately ₹10 per day is worth allocating funds exceeding the country’s health and education expenditure.

Second, it is true that pilot runs of UBI conducted by UNICEF and Self-Employed Women’s Association (SEWA) covering 12,000 individuals in Madhya Pradesh have been successful and have shown positive results. Guy Standing, who worked on these pilots, highlighted that the individuals used their basic income grants to improve their housing, move to a varied diet, increase spending on medical treatment, enhance school enrolment, and contrary to common criticism, were more likely to have increased their productive work. The results show the positive impact UBI can have on society. But to realise the actual impact the scheme will have on society, the exact conditions post-implementation need to be tested in pilot surveys. If the government plans to fund UBI by repealing MGNREGS and PDS, pilots need to incorporate their removal. Guy Standing’s surveys, admittedly, do not test if these grants should be substituted for other schemes. The outcomes, in that case, might not be as hopeful.

Finally, since a major criticism of government schemes is their corruption and leakage, it is worth asking if UBI is what we need. Since targeting is cumbersome and error-prone, universalisation seems like a good alternative. The scheme is applicable for the 29.5 percent of the population below poverty line and everyone above it. However, in doing so, the scheme incorporates a leakage of 70.5 percent within itself. Surely, that money could be put to better use. Also, this spreads the social security net too thin. Surjit Bhalla recently proposed targeting the bottom 50 percent of the population as an alternative. This can be achieved on the basis of the Socio-Economic Caste Census figures. But, his calculation of financing UBI involve scrapping MGNREGS and PDS. Doing so while targeting the beneficiaries is a risky proposition, since a poor left out by mistake will have nowhere else to turn.

Since many of the recent suggestions on implementation of UBI involve doing away with older schemes like MGNREGS and PDS, the government also needs to be wary of the effects such a move would have on the overall economy. The job losses of people enforcing these government schemes like PDS distributors and the added cost of dismantling the infrastructure that is in place will add to the colossal bill of implementing UBI.

In a year when the pressure will be high on the government to meet its fiscal deficit targets while reviving the economy post-demonetisation, the budget cannot afford to incorporate a radical move like UBI. UBI is an innovative and effective weapon to combat poverty. But, its pros need to be weighed against its major con of finance, which is also the reason developed countries have been holding back on its implementation. Switzerland voted against its implementation and Finland is still testing small pilots of the scheme. It will be interesting to see the view Economic Survey takes on the matter and the stance taken by the government in the upcoming budget. Hopefully, the decision will not be as abrupt and disruptive as the one spelt out on demonetisation.

The article was published with First Post on January 25, 2017.