Brexit and its Implications

Home Brexit and its Implications 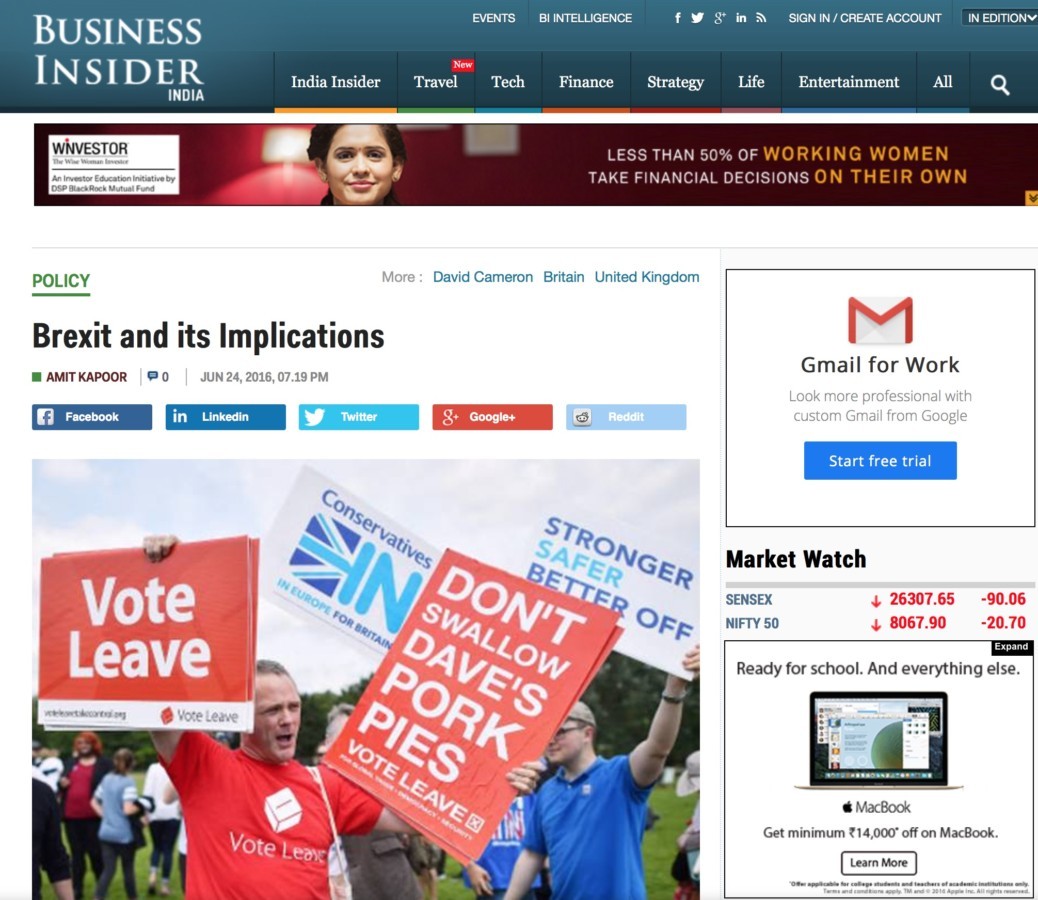 The past ten days or so have been particularly momentous not only for India but the world as a whole. After Rexit (A terms coined to reflect Indian RBI present Governor Rajan’s decision to leave his role for going back to the academia in the US) we have had a Brexit (Britons wanting to leave the European Union) as well. It has also resulted in the announcement of plans for an exit of Prime Minister David Cameron as he expressed his desire to ‘stand down’ from his present role. The Britons in a close vote of 51.9% to 48.1% chose to sever their 43-year-old ties with the EU. There are interesting issues about the development which merit attention.

First, why did the British people opt for an exit out of EU? It runs counter to the benefits free trade or principles of economics bring. However the primary reason it seems why people of Britain have chosen to opt out is because of immigration from economically poorer states of the EU like Lithuania and Poland. Staying in Europe was considered to be a part of a trade-off between capital movement and movement of people. While being in EU did offer benefits regarding membership and the free flow of goods and services as well as ease of doing business it also brought in a lot of immigrants. That issue has resulted in people believing (mostly in the semi-urban and un-globalised areas) that as a whole they are better off exiting and renegotiating their position with EU rather than being a part of EU and staying on with the particular issues.

It bring us to the second related question of the likely impacts of the exit? The significant short-term effects are from the viewpoint of political security and economy. On the political side, the fallout has been the standing down of Prime Minister David Cameron and an announcement by Scotland’s first minister Nicola Sturgeon that a second vote on the independence of Scotland was now ‘on the table’. It was post a 2014 referendum on Scotland where a majority voted ‘no’ to remain in the United Kingdom and not become an independent nation state. Also, other smaller fallouts relate to an online campaign to free London from Britain. It was because Britain and Scotland were placed in Britain where the majority seemed to favor remaining within the EU rather than exiting the EU.

On the immediate economic and financial side, the pound sterling took a beating on the stock markets with it depreciating an astounding 11 percent against the dollar. Also, the value of the pound against the dollar reached a historic 31 year low. The major stock markets fell post the referendum as did major bank stocks including Lloyds down 30 percent, RBS down 34 percent and Deutsche Bank down 17 percent.

It brings us to the final question on the long-term economic and societal consequences of Brexit . The last issue is the most important concerning future for people of Britain and members of EU? This can be broken down into two or three related aspects. The first is that if the lawmakers go ahead with the referendum verdict (which they most likely will), then they will take this issue up with EU under Article 50 of the Lisbon treaty which relates to exiting the monetary union. It will give Britain a two-year timeframe for exiting the monetary union. The extent to which the exit will be there will determine the future of Britain and its relationship with EU. If it opts out completely, then renegotiations with major countries/ the EU as a block will have to be redone. This will mean crucial time and money to be invested in resetting the rules of the governance and trade.

Published in Business Insider on June 24, 2016. To know more