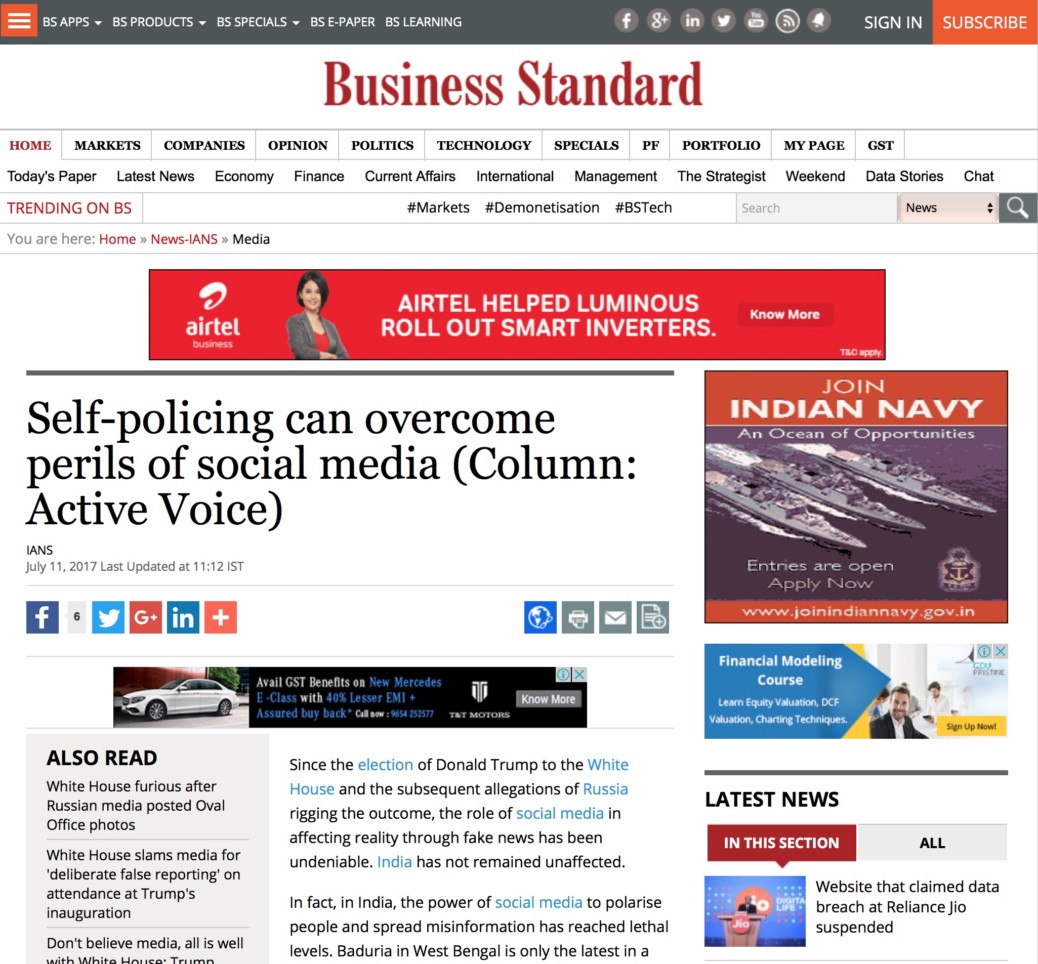 Since the election of Donald Trump to the White House and the subsequent allegations of Russia rigging the outcome, the role of social media in affecting reality through fake news has been undeniable. India has not remained unaffected. In fact, in India, the power of social media to polarise people and spread misinformation has reached lethal levels. Baduria in West Bengal is only the latest in a litany of towns affected by violence arising out of content posted on social media. Muzaffarnagar, Saharanpur, and Dadri are horrifying reminders of the fallibility of social media and its destructive consequences.

There are two separate and inter-connected issues with social media that have led the country to such a violent juncture in which it finds itself today. The first is its inbuilt ability to bias opinions and polarise people. Second, is the stated drawback of spreading misinformation. Both have made significant contributions in reducing tolerance, not just in India but throughout the world. Myanmar and Kenya have had similar problems with Facebook being used as a medium to propagate hate speech that has ended up in widespread violence.

The first issue of social media accentuating biases is the most worrisome aspect of the two since it affects even the more careful online users. The problem begins with the very algorithm of mediums like Facebook that prioritise posts based on your past online activity. If you prefer to watch cat videos, you’ll end up finding more cat videos on your feed. You’ll also end up interacting more with people who display similar interests in cat videos. However, when the preferences are not as innocuous as cats, the same algorithm creates a cluster of like-minded people who share ideas that confirm each other’s biases leading them to act out in the real world.

Two common psychological phenomena not only add to our inability to perceive our biases but strengthens it instead. The first is implicit bias, which refers to the tendency of humans to place people into different groups and trust the ones that are seen to be from within one’s own group. Social media aids this bias by providing content from people who belong to a similar group or ideological thinking and de-prioritising ideas from opposing groups. The second phenomenon is confirmation bias, which is the human tendency to seek out content that we believe to be true and ignore facts that contradict our beliefs. Based on our online history, social media posts bombard us with information that strengthens our belief in ideas that we want or already believe to be true and accentuates our confirmation bias.

These biases can easily explain the surprising outcome of the recent US presidential elections. The implicit bias led to the creation of two completely separate worlds within social media in the US consisting of people from opposing camps on the idea of Trump as President. Both existed in a bubble that prevented any contact between the two. Even liberal media belonging to the camp that popularly ridiculed the idea failed to realise the existence of the other side, owing to the confirmation bias that they fell prey to on various platforms including social media. These biases led to a growing disconnect between the actual sentiment on the ground and what the media actually perceived.

The problem of strengthening biases becomes more problematic when combined with the second issue of social media; the growing circulation of fake news. Due to the confirmation biases that we have, any inaccurate information that supports our pre-conceived biases leads us to treat it as Gospel. This has been repeatedly seen in the growing spate of violent acts that India has been experiencing. Circulation of manufactured WhatsApp videos about child abductors in the area ends up in unknown people being lynched who are later found to be innocent.

Social media, thus, has led to the evolution of alternate realities where disconnected clusters of people exist who share like-minded ideas that are rarely based in reality while at the same time being stonewalled from views that offer a different perspective, which makes them unaware of their existence itself. Earlier, a person unsure of his beliefs would have had to read or step out to make real-world interactions that would also have introduced the person to varying opinions and ideologies. Social media eliminates that need and only presents a biased view that reaffirms a person’s pre-conceived views that too from dubious sources on a national or even global scale.

This is not to disregard the political role played in the growing spate of violent acts across India, but there is a reason social media has mostly been the immediate source of these conflicts. The medium and its scale makes it an effective tool to manipulate gullible masses and spread mischief. Its ability to accentuate biases has also played a significant role in developing highly polarised societies. This had never been so easy earlier. People were less connected, but the probability of interaction with a person having a different point of view was not decided by a biased algorithm.

To resolve the menace, there is no better alternative to a self-assessment of the veracity of the information received from unverified sources and expose oneself to varied opinions. However, this cannot be expected of people considering the inherent biases that they usually have and especially in a country like India where illiteracy is ubiquitous. However, small changes across social media platforms can go a long way. First, a self-policing mechanism by people can be added for all posts that ask people to rate them on their accuracy. Such mechanisms can allow people to make informed and rational choices. Second, a few tweaks in social media algorithms can suggest pages across the ideological spectrum to people so that they are exposed to a variety of opinions and not just what they want to hear. Messaging platforms are harder to manipulate as they are usually encrypted, and the content is usually obtained through forwarded messages rather than an algorithm. Better awareness among people about the prevalence of inaccurate information across such platforms is the only solution in such cases.

The article was published with Business Standard on July 11, 2017.