The challenge with gig economy

Home The challenge with gig economy 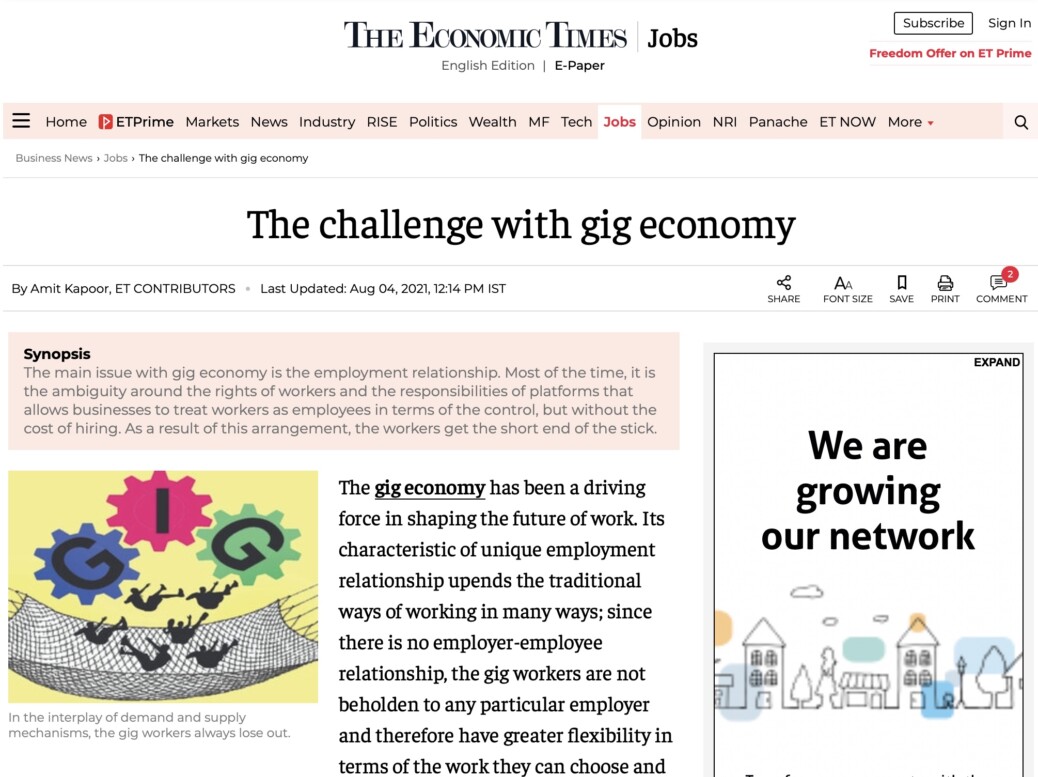 The challenge with gig economy

The gig economy has been a driving force in shaping the future of work. Its characteristic of unique employment relationship upends the traditional ways of working in many ways; since there is no employer-employee relationship, the gig workers are not beholden to any particular employer and therefore have greater flexibility in terms of the work they can choose and the hours they dedicate. Businesses enjoy similar flexibility when they are not dependent on a set of employees for executing tasks, and additionally benefit from avoiding the cost of social security and fixed remuneration that are provided to an employee. However, gig economy has invited praise and ire in equal measures. Although it seems like a win-win situation for both parties, the ground reality is often more complicated.

Over the years, the growing popularity of platform businesses has been accompanied with pockets of protest by their workers – primarily those engaged in cab and delivery services – from time to time. In India, the grievances have mainly been related to remuneration and the working conditions.[i] According to the gig workers in India, the low payment often pushes them to work longer than 8 hours, and work on all days of the week.[ii] However, it is the very model of gig economy that exposes the workers to such vulnerabilities, as a business cannot be held accountable if the workers are not employees. This raises questions about the ethical basis of the gig economy, and necessitates a further study of its overall structure.

Firstly, one needs to draw a distinction between gig economy and platform businesses. As per the World Economic Forum, gig economy is defined by its focus on workforce participation and income generation via “gigs”, single projects or tasks for which a worker is hired. On the other hand, platform businesses serve as marketplaces where sellers and buyers can be matched. This can manifest in platforms like Amazon where transaction takes places between buyers and sellers of goods, or platforms like AirBnB where hospitality and not physical goods are the commodity and no transfer of ownership takes place, or platforms like Upwork, Uber and Practo where users are matched with the services they need. The last category corresponds to gig economy.

Digital technology has popularised platform-enabled gig work as it made it possible for businesses to leverage gig work to offer on-demand services to users. Instead of hiring employees to offer services to users, platforms act as a bridge by facilitating transaction between sellers and consumers, thus cutting the transaction cost for both parties without incurring any cost of maintaining employees for themselves. For instance, a taxi driver looking for customers is better benefited by an app like Uber that instantly connects him to someone looking for a cab, rather than aimlessly driving around to look for one himself. Similarly, for the user, it is easier to book a cab through a platform like Uber rather than waiting for a taxi to drive by.

The gig economy in the fundamental sense offers a work arrangement that works for everyone involved, but it is when the power dynamics come into the equation that the delicate balance is thrown off. From the perspective of a worker, being an employee entails more rigidity of working hours and pay, whereas the gig economy has more options of work assignments and payment offerings to choose from, more flexibility of working hours and greater freedom of switching from task to task. However, when the labour supply is high and more disposable, as in the case of blue-collar workers, the gig workers have no power to influence payment offerings, and freedom to choose becomes but an illusion. In the interplay of demand and supply mechanisms, the gig workers always lose out. Thus, as platforms become more popular among gig workers, more of them join the pool, thus driving down their own remuneration.

Nevertheless, the gig economy still has a lot to offer. In a country like India where informal working arrangements dominate the economy, many blue-collar workers already work in precarious conditions, face income insecurity and have no employment stability. In comparison, gig economy is a better alternative. Besides having a system in place that is fairer than informal work arrangements, it is also characterised by ease of entry. The informal networks in the informal economy that may create barriers of entry for outsiders does not exist in the gig economy. Gig work has also been a source of supplementary income for those facing economic hardships, and tided them over until they could find employment opportunities. For the Indian economy as well, the gig economy has been responsible for a huge proportion of job creation, which is only projected to increase in the coming years.[iii]

Hence, the gig economy has its sets of pros and cons, and the benefits that it brings to the Indian economy makes it imperative for policymakers to reduce the cons. However, the heterogeneity of platform-enabled gig work and the ambiguity of its employment relationship eludes regulators around the world. The meagre pay and poor working conditions often lead policymakers to demand that gig workers be labelled as employees, but this completely erases the gig economy rather than addressing the issue.

The main issue with gig economy is the employment relationship, which needs to be more clearly defined. Most of the time, it is the ambiguity around the rights of workers and the responsibilities of platforms that allows businesses to treat their gig workers as employees in terms of the control they exert upon them, but without the cost that hiring an employee entails. As a result of this arrangement, the workers get the short end of the stick. If the gig workers are termed as partners instead of employees, the right questions to ask are, whether workers have any say on the remuneration they receive? Whether workers enjoy enough flexibility to accept and reject offer of their services without any ramifications? How is the accountability for services shared between the platform and the worker? In reality, the answers to these questions change with the level of skills possessed by a gig worker, and is a prerogative of the platform in the case of low-skilled workers. Hence, policymakers need to answer such crucial question in order to delineate the employment relationship in the gig economy, as a first step regulate it.

Although regulation is seen as a notoriety by businesses, the right regulatory instrument can drive innovation. In these times when technology is enabling disruptive innovation at an unprecedented pace, it is safe to assume that innovators can always find a way to turn a problem into an opportunity. With no regulation to control platforms enabling gig work, they can fall into complacency and seek to increase shareholder value by such means that may jeopardise the wellbeing of workers who have no power to exercise in the relationship. At last, if a business cannot survive without putting their workers’ rights on the back burner, then there is little justification for its inception in the first place.

The article was published with Economic Times on August 4, 2021.