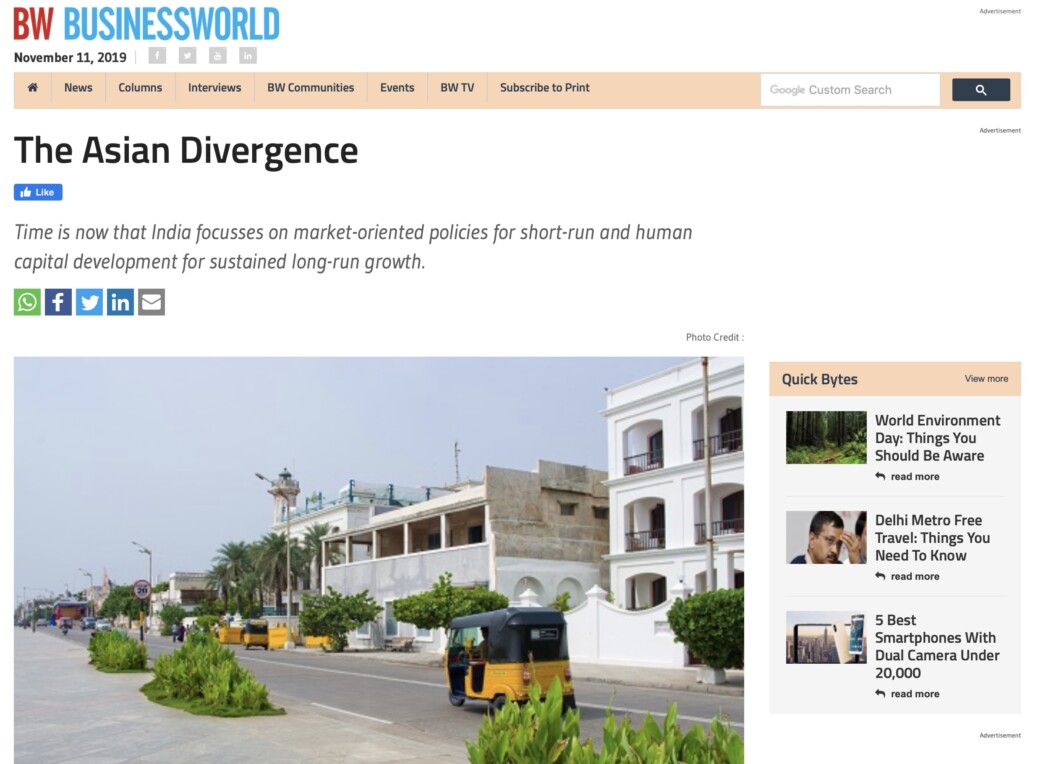 Back in October 1949, when India was framing its constitution that would make it a democratic republic, China was adopting communism. The two neighbours, which had recently emerged from a colonial past, adopted starkly different approaches of societal organisation. While India distributed political power among its people, China chose an authoritarian model.

The outcome of these choices have been vast as is evident today in China’s prominence on the global stage. From being at par with India in 1950s to surpassing India in all the aspects, China’s rise has been extraordinary.

During the early nineteenth century, both the countries followed opposite growth trajectories. India’s per capita income grew from $533 in 1820 to $673 in 1913 while that of China declined from $660 to $552 (in 1990 dollars). Both the countries witnessed a fall in per capita income from 1913 to 1950, but the fall was more severe in case of China. So, by the year when India became republic, it was economically sound than China. In fact, even until 1978 the difference between the per capita GDP of both countries was not very significant.

The aftermath of Mao’s calamitous programmes of the Cultural Revolution and the Great Leap Forward derailed China’s economic progress in the first three decades after 1950. But as Deng Xiaoping came to power in 1978, this trend reversed. From an equal standing, China’s per capita GDP today is approximately 4.6 times that of India. Thus, China’s economic performance holds some noteworthy lessons for India.

One of the most important things that China did well was targeting human development. Its emphasis on education for all and provision of healthcare facilities by its communes helped the country to perform well on human development. Starting with the similar scores in HDI in 1950s (China-0.163 and India-0.160), China has shown a remarkable improvement by 1973 (0.407 against 0.289 for India).

While China made its vast pool of human capital, its strength, India on the contrary, always faced concerns for education and healthcare. Even when India undertook economic reforms in early 1980s, its health and education levels were still a cause of worry. During the time when the life expectancy in China was 64 years and literacy rate was 66 percent in 1980, an average Indian died at the age of 54 while just 43.6 percent of Indian population was literate.

Another considerable difference between the two countries was their focus on the type of industries. China leveraged on its pool of cheap labour by focussing on labour-intensive industries such as textiles, while India emphasized on heavy industries, which are predominantly capital-intensive and employ less labour. By introducing special economic zones (SEZs) in 1980, China pushed manufacturing growth and setting up of export-oriented industries while India focussed on SEZs much later. As a result, by 1998, China’s FDI investments were more than 10 times as that of India (Maddison estimates).

Since India did not give the required push for labour-intensive manufacturing growth, the sector always remained sluggish and the country became a service-led economy. To the contrary, China became the manufacturing powerhouse of the world. Even Bangladesh is following China’s footsteps by greatly focusing on its manufacturing sector, which will create higher employment opportunities for its citizens. Since 2017, Bangladesh has surpassed India and has become the fastest-growing South-Asian country. Furthermore, it is effectively capturing the export-industries which are looking for China’s alternative following the increased labour costs and US-China trade war.

In the light of these facts, India needs to learn from the holistic growth trends of its neighbours. Time is now that India focusses on market-oriented policies for short-run and human capital development for sustained long-run growth.

The article was published with Business World in the issue dated October 26 to November 8, 2019.