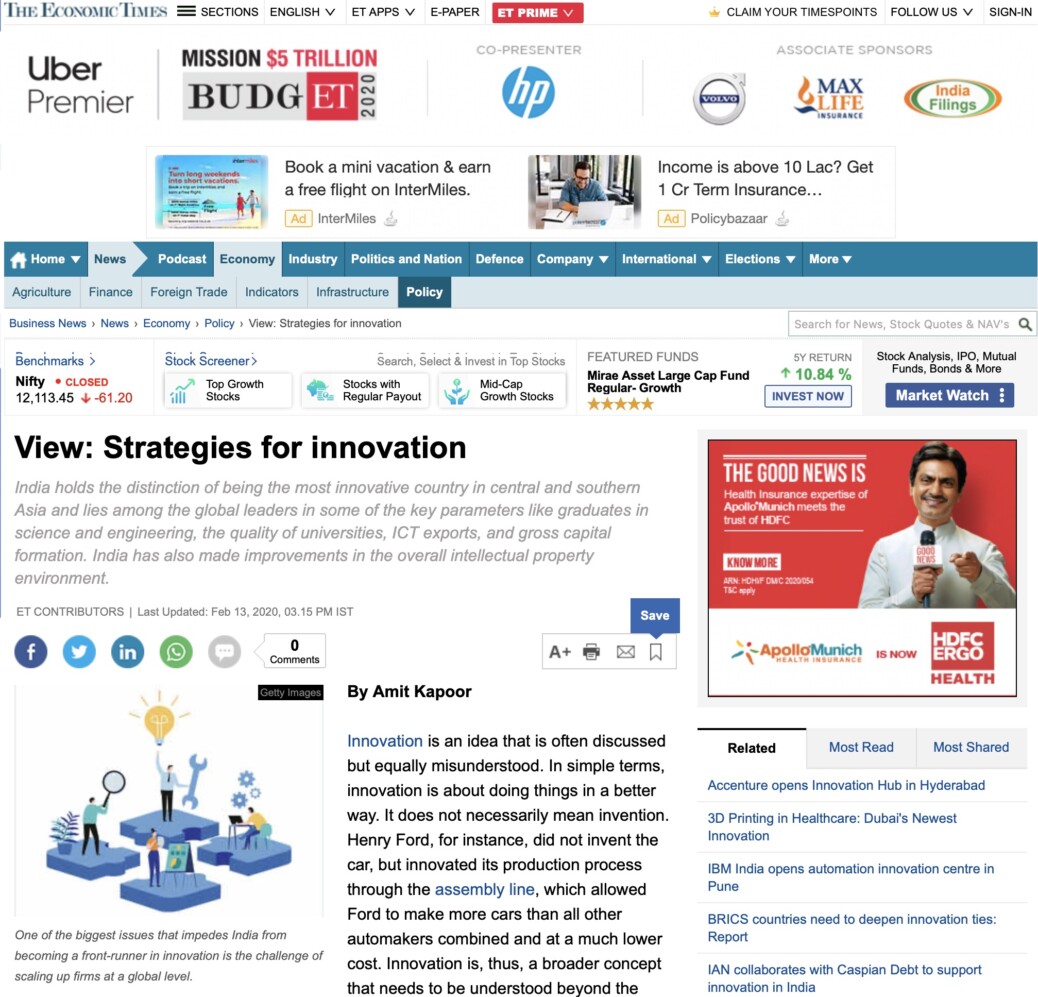 Innovation is an idea that is often discussed but equally misunderstood. In simple terms, innovation is about doing things in a better way. It does not necessarily mean invention. Henry Ford, for instance, did not invent the car, but innovated its production process through the assembly line, which allowed Ford to make more cars than all other automakers combined and at a much lower cost. Innovation is, thus, a broader concept that needs to be understood beyond the conception of development of technologically advanced products in sophisticated labs. It can be about more efficient and effective supply chains; better product designs; better customer service and delivery; or better solutions for existing business processes.

Over the last few years, India has been performing well on the Global Innovation Index rising from 81 in 2015 to 52 in 2019. Consequently, India holds the distinction of being the most innovative country in central and southern Asia and lies among the global leaders in some of the key parameters like graduates in science and engineering, the quality of universities, ICT exports, and gross capital formation. India has also made improvements in the overall intellectual property environment. In the International Property Rights Index, India has improved its ranking from 59 to 55 between 2018 and 2019.

However, while such metrics can give a broad sense of the innovation ecosystem within a country, a deeper discussion on the enabling factors around it are necessary. With this perspective in mind, the Institute for Competitiveness held a roundtable on “Innovation and Intellectual Property Rights” to gather viewpoints of key stakeholders from the government, industry, and academia. There were a few common themes that emerged from the discussions.

One of the biggest issues that impedes India from becoming a front-runner in innovation is the challenge of scaling up firms at a global level. The biggest impediment to scale is the extent of regulation that grows along with the size of the firm. But there are other issues as well. Scale can only be achieved if firms invest in research and development; not just to create new products but innovate in different ways that give them a competitive edge over other industry players. Such research and development require immense capital backing that start-ups have a challenge in raising. As long as Indian firms do not scale to become global leaders in their industry, it will lag on innovation.

The second issue that requires improvement in the Indian innovation ecosystem is the provision of an enabling environment for its development. India loses out to other nations on basic factors from the cost of power to the cost of capital that are steep in the country for a wide variety of factors. Countries like China also manage to provide subsidies to its domestic firms while remaining compliant with WTO norms. India also needs to explore opportunities to encourage its domestic firms to grow while remaining compliant with its international agreements. Innovation on the policy front can fuel innovation at the level of industries.

There are also several issues with respect to India’s intellectual property rights (IPR) environment that are a cause for concern for several global firms. India’s IP environment is seen to be too restrictive in aspects like compulsory licensing and section 3(d). These issues need to be resolved through better engagement between the government and the industry.

A final area that India needs to work upon is the industry-academia linkage in its current form. Universities perform two roles in any economy: knowledge creation and knowledge exchange. Both of these functions need to work in consonance with one another. The channel of knowledge creation needs to incentivise knowledge transfer between industry and academia. Innovation suffers if either of these functions are affected. A pertinent reason that knowledge exchange does not take place in India is a lack of clarity in the body which owns the intellectual property of the research undertaken in universities that is funded by the industry. Such issues need immediate resolution for the innovation ecosystem to flourish.

Stronger linkages are also needed in the setting up of a curriculum that helps universities impart skills that the industry requires. Indian graduates have a problem of employability. In the recently released India Skills Report, it was estimated that merely 46 percent of the country’s graduates are employable. Contrast this with China where vocational training is imparted right from the school-level and their talent is one of the key reasons that firms face inhibitions in exiting despite rising labour costs. Therefore, India should address its issues with skilling as well through better industry-academia linkages.

A single idea that can address all these issues is cluster development. Clusters are often misunderstood to be an agglomeration of firms in geographical proximity. On the contrary, clusters are network of firms, suppliers, universities, and other supporting institutes that enable an environment of cooperation and collaboration where ideas are evolved and exchanged. Cluster participation eases the process of learning and innovation as firms try to create a shared understanding of the industry and its workings. Prominent clusters like Silicon Valley and Shenzhen have famously played such a role.

In such an environment firms can find opportunities to scale, an enabling environment, and strong linkages between key stakeholders through proximity. India requires such radical transformations in its innovation ecosystem to create global champions.

The article was published with Economic Times on February 13, 2020