Role of technology in tackling corruption 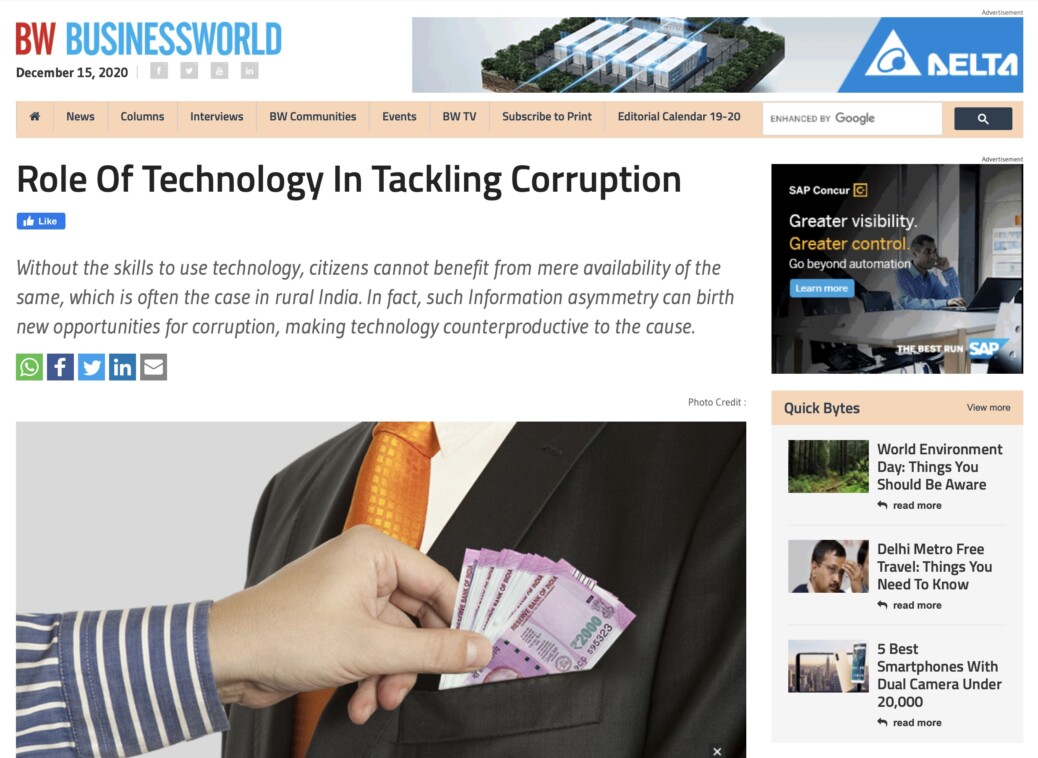 Role of technology in tackling corruption

After years of efforts to eliminate corruption, whether through policy interventions or through social movements, it continues to pervade our everyday life. A few high-profile scams and frauds capture the headlines from time to time, but the petty corruption that we encounter everywhere is so normalised that it is hardly newsworthy in India. A recent study by Transparency International puts the bribery rate in India at 39% and citizens using personal connections at 46%. It was the highest among the 17 Asian countries surveyed.

Regardless of the small magnitude of a crime like petty corruption, it should not be ignored. It is these day-to-day corrupt practices that disrupt the delivery of basic public services that the poorest of the country are most reliant on. It impedes implementation of development programmes, ultimately affects the economic growth, and weakens governance and democracy. However, with the emergence of new technologies, there are renewed hopes for addressing corruption.

Lack of information among the general public is often the mainspring of petty innovation. Institutions are in place to facilitate interaction in the process of accessing public services by reducing the transaction cost including the cost of accessing information. However, systemic corruption incapacitates the institutions from performing those functions. This is where technology can come in handy. It has substantially reduced transaction costs in market interactions by improving access to information for both businesses and users, and thereby strengthening self-regulation mechanisms. It can also work in the case of public services. If citizens have greater information about the processes and their entitlements, they will be empowered to hold governments accountable.

Only a few years ago, technology would have been of little help because of its limited outreach, but now the use of smart phones and internets extends to rural areas as well. Hence, one way institutions can utilise it is by making information about public services accessible at the touch of a button. Creating greater transparency about services and development schemes will empower citizens to question their local authorities and hold them accountable. Further, institutions can also invest in tech innovations to boost integrity systems. Data is becoming an indispensable tool, which can be leveraged to build transparency in systems and processes.

Another way technology reduces corruption is by automating bureaucratic processes. The cumbersome processes create incentives for soliciting bribes, but automation can eliminate the physical interaction between individuals and public officers, leaving no space for any such dealings. The Direct Benefit Transfer (DBT) schemes of the Government of India are a prime example of how automation of processes can cut red tape and corruption. Through direct transfer of cash benefits to the beneficiaries’ Jan Dhan Yojana bank accounts, the development schemes eliminated the role of middlemen and by extension, opportunities for corrupt activities. 351 DBT-based schemes saved Rs 1.70 lakh crore from falling into the hands of intermediaries. The DBT schemes functioned on the back of the ‘JAM Trinity’ of Jan Dhan-Aadhaar-Mobile, among which Aadhaar ¾ a unique digital ID provided to each citizen ¾  made it possible to streamline the identification of beneficiaries and eliminate ghost beneficiaries, thus reducing the risk of corruption and fraud.

Digitalisation has already made a huge difference in the implementation of many development programmes and provision of public services, so the next step in combating petty corruption should be to improve utilisation of digital tools. Access to mobile and internet as well as digital literacy can be further expanded. Without the skills to use technology, citizens cannot benefit from mere availability of the same, which is often the case in rural India. In fact, such Information asymmetry can birth new opportunities for corruption, making technology counterproductive to the cause.

The article was published with Business World on December 11, 2020.