How technology makes it possible to solve corruption

Home How technology makes it possible to solve corruption 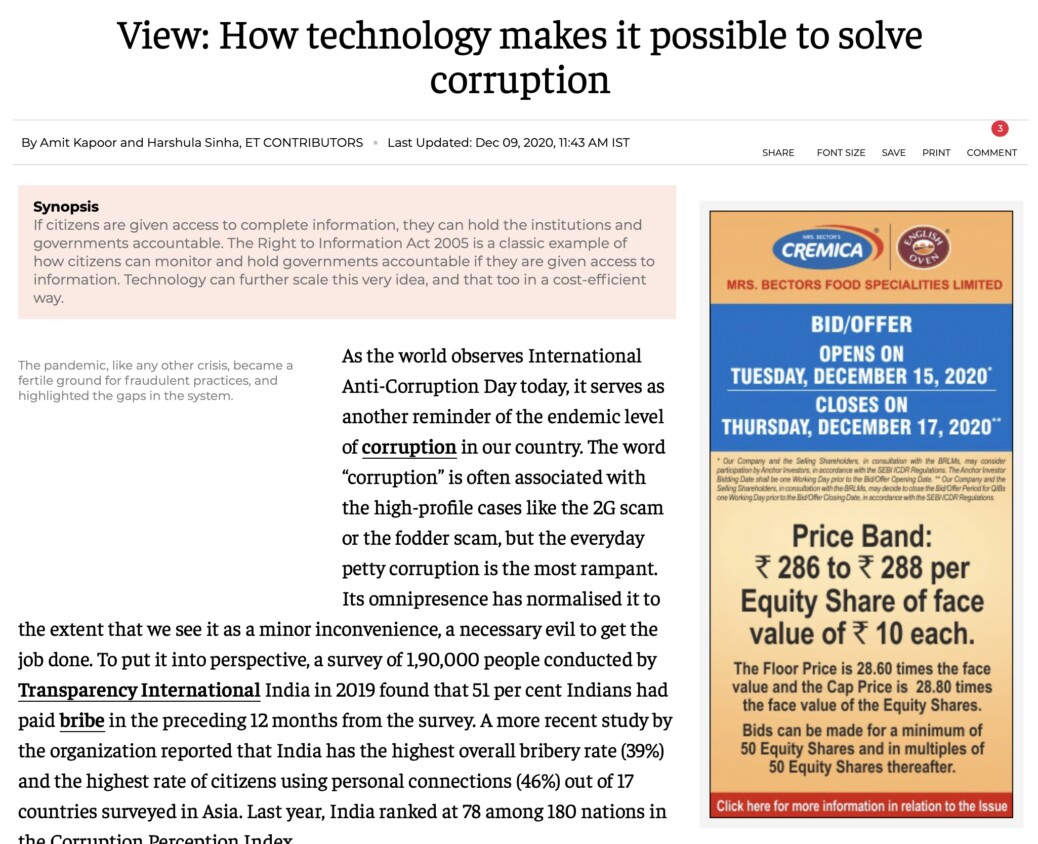 How technology makes it possible to solve corruption

As the world observes International Anti-Corruption Day today, it serves as another reminder of the endemic level of corruption in our country. The word “corruption” is often associated with the high-profile cases like the 2G scam or the fodder scam, but the everyday petty corruption is the most rampant. Its omnipresence has normalised it to the extent that we see it as a minor inconvenience, a necessary evil to get the job done. To put it into perspective, a survey of 1,90,000 people conducted by Transparency International India in 2019 found that 51 per cent Indians had paid bribe in the preceding 12 months from the survey. A more recent study by the organization reported that India has the highest overall bribery rate (39%) and the highest rate of citizens using personal connections (46%) out of 17 countries surveyed in Asia. Last year, India ranked at 78 among 180 nations in the Corruption Perception Index.

The large-scale corruption is an issue for a separate discussion, but the practice of petty corruption is the one that slowly eats away at the system day-by-day. It has always disrupted delivery of public services, so that despite the myriad of development programmes and schemes, immense leakages in the system and red-taping hinder their implementation. Besides that, corruption also negatively affects economic growth, democracy, governance and rule of law. The hidden nature of the practice also makes it trickier to tackle it. But it is possible, and especially now, in the digital age.

The simple reason that petty corruption occurs is that citizens do not have complete information. Institutions have been assigned the responsibility of eliminating information asymmetry and thereby create transparency and reduction in the transaction cost of accessing services. However, when institutions themselves are ridden with corruption, or in other words, when corruption becomes systemic, it cannot be tracked and attacked.

However, if citizens are given access to complete information, they can hold the institutions and governments accountable. The Right to Information Act 2005 is a classic example of how citizens can monitor and hold governments accountable if they are given access to information. Technology can further scale this very idea, and that too in a cost-efficient way, as the democratization of technology has ensured the penetration of smart phones and internet in even the remote parts of the country.

Now, the question is, how can technology help? Firstly, technology has ushered the age of information, so that information can be seamlessly disseminated. Institutions can leverage technology to make vital information regarding public services readily available in the public domain, and thus improve transparency. In addition, data is a critical asset today, which can be used to power tech innovations that boost integrity systems. According to a World Economic Forum study, data can make it possible “to detect and deter fraud risks, complex networks and corrupt practices” by way of cross-referencing public databases.

Technology can also cut red tape through automation of bureaucratic processes. Complex procedures are cumbersome and typically lay the ground for corruption. With no opportunities for face-to-face interactions between citizens and public officials, digital processes substantially reduce the opportunities for soliciting or accepting bribes.

These claims can be corroborated by the success of Direct Benefit Transfer (DBT) schemes.  The ‘JAM Trinity’ of the Jan Dhan-Aadhaar-Mobile significantly eliminated intermediaries, made it easier to detect and deter fraud risks and therefore, prevented leakages in the system. As a result, 351 schemes deploying the DBT model were reported to have saved Rs 1.70 lakh crore from falling into the hands of middlemen. The backbone of the system was the Aadhaar digital ID program, which is being used to deliver government subsidies, benefits, and services. The mandatory linking of Aadhaar with one’s bank accounts, mobile numbers and other identity proofs has created a strong database for cross-referencing purposes and facilitated the identification and elimination of ghost beneficiaries.

Introducing digital processes in tax filing has also helped reduce tax evasion. Since the Goods and Services Tax (GST) filings are mandatorily done electronically through the GST Network ¾ which is also linked with the Aadhaar system ¾it has minimised the face-to-face interaction between taxpayers and tax officials, bringing greater transparency to the process.

However, technology can only be leveraged to tackle corruption if the larger population is equipped with the skills to use it. In other words, a new set of information asymmetry related to the use of newer technologies can add to the existing information asymmetries. Despite means to access information, many mobile users in rural India do not have the capability to access essential information. As a result, public distribution systems are not completely immune to fraudulent practices.

The pandemic, like any other crisis, became a fertile ground for fraudulent practices, and highlighted the gaps in the system. Although the government announced relief entitlements under the Pradhan Mantri Garib Kalyan Yojana (PMGKY), the lack of information about the scheme prevented many beneficiaries from availing it. Further, e-mitras and bank correspondents as intermediaries left open the gaps for fraudulence and corruption, signalling that rural India has not completely realised the vision of Digital India.

To conclude, India is on an upward trajectory in terms of digitalisation, albeit there are more grounds to cover in rural India. Digital literacy programmes like the Pradhan Mantri Grameen Digital Saksharta Abhiyan (PMGDISHA) can also be ramped up in order to create greater transparency and accountability within delivery systems. Meanwhile, digitisation of internal processes of the government and data-driven tech innovations are areas that should be explored to further strengthen the integrity systems and disrupt corruption risks.

The article was published with Economic Times on December 9, 2020.