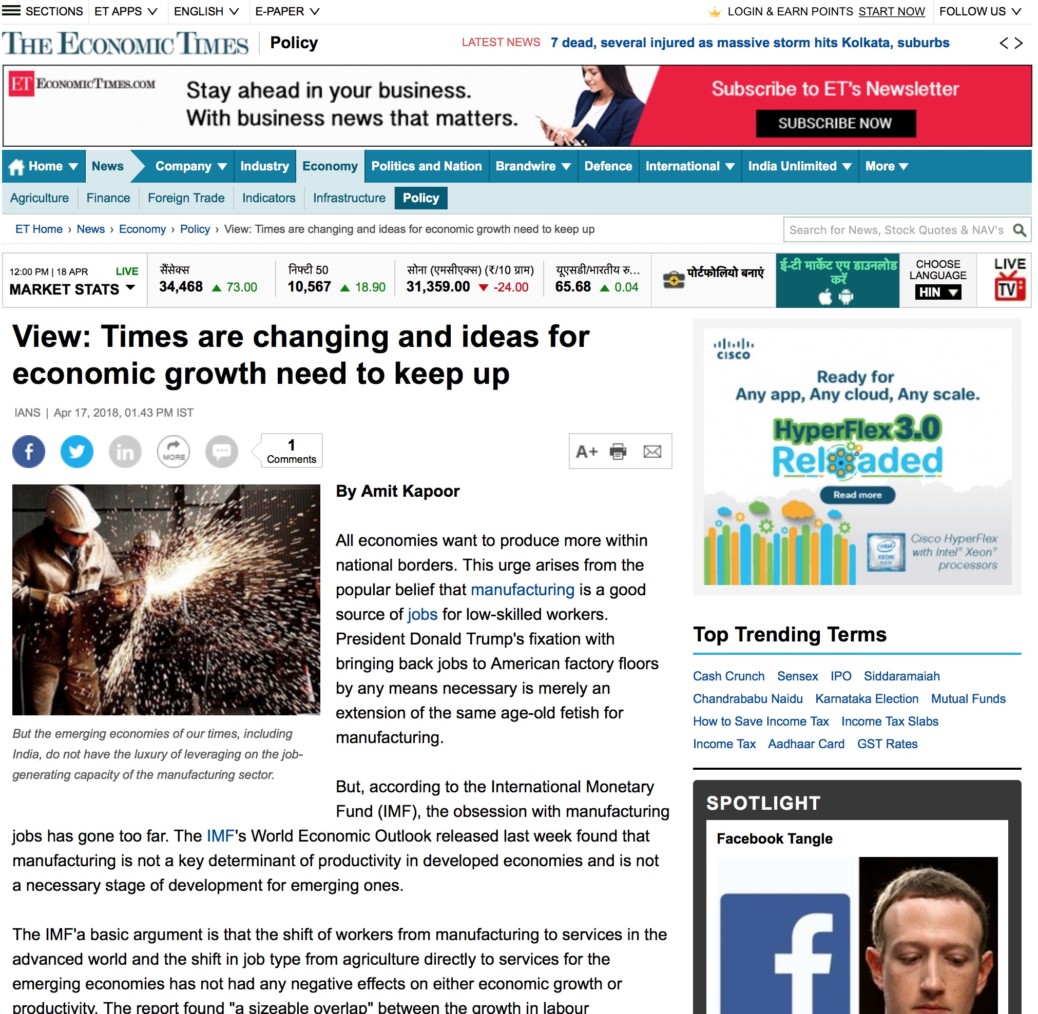 All economies want to produce more within national borders. This urge arises from the popular belief that manufacturing is a good source of jobs for low-skilled workers. President Donald Trump’s fixation with bringing back jobs to American factory floors by any means necessary is merely an extension of the same age-old fetish for manufacturing.

But, according to the International Monetary Fund (IMF), the obsession with manufacturing jobs has gone too far. The IMF’s World Economic Outlook released last week found that manufacturing is not a key determinant of productivity in developed economies and is not a necessary stage of development for emerging ones.

The IMF’a basic argument is that the shift of workers from manufacturing to services in the advanced world and the shift in job type from agriculture directly to services for the emerging economies has not had any negative effects on either economic growth or productivity. The report found “a sizeable overlap” between the growth in labour productivity between manufacturing and services sub-sectors. In fact, some service sectors also exhibit higher productivity growth rates than the leading manufacturing industries.

Therefore, since these structural changes across economies is effectively enhancing productivity, which determines the standard of living, the stress on revitalising the manufacturing sector seems unnecessary.

The bias towards manufacturing has been true for the field of economics since the time of Adam Smith. While writing “The Wealth of Nations” in the shadow of the Industrial Revolution, Smith was expectedly charmed by the potential of the manufacturing sector for economies. He wrote that labour, which provides services, does not provide any value: “Like the declamation of the actor, the harangue of the orator, or the tune of the musician, the work of all of them perishes in the very instant of its production.”

Would Smith’s view have changed in modern times? Probably yes. Linda Yueh in her brilliant new book, “The Great Economists: How Their Ideas Can Help Us Today”, argues that due to rapid technological advancements since Smith’s time, the tune of the musician, which he regarded as ephemeral, now holds tangible value. Also, since Smith believed in the power of the invisible hand of the markets, he would have derided any move towards introducing market distortions like the Trump tariffs to promote manufacturing.

This does not imply that the government should sit back and do nothing. On the contrary, it should focus on creating a business-friendly environment instead of prioritising one part of the economy over the other.

It is also necessary to understand that good old manufacturing of the Henry Ford era is not achievable in the 21st century. Since the advent of technology, manufacturing has not remained a labour-intensive job. So, no amounts of tariffs can turn the clock back.

In the case of India, however, the IMF’s argument that it is not worrisome to directly transition from an agricultural-led to a service-led economy and skipping the stage of industrialisation since it has not affected productivity levels might not seem as reassuring. The fact of the matter remains that India has been unable to create jobs. Between 2004 and 2012, a period during which India experienced its highest growth phase in history and for which conclusive data for jobs is available, GDP grew at 8.1 percent per annum while jobs grew at a paltry two percent.

A report by The Boston Consulting Group (BCG) and the Confederation of Indian Industry (CII), “India: Growth and Jobs in the New Globalisation”, published last year, revealed that almost all of India’s growth since 1991 has come due to higher capital investment. The contribution of labour to India’s growth has been low or negligible during the period. The total factor productivity has been fluctuating and clearly most of it was being driven by a growth in productivity of capital. So, even though the IMF might be right in arguing that missing the industrialisation phase did not impact productivity, it does seem to have had a high bearing on the capacity of job creation.

But the emerging economies of our times, including India, do not have the luxury of leveraging on the job-generating capacity of the manufacturing sector. Programmes like Make in India cannot help in reviving that capacity in an increasingly mechanised world. India needs to play on its strengths instead, which lie in its robust service sector. Between 2010 and 2014, India’s service sector grew at 8.6 percent per annum; faster than the service economies of China and the US. Moreover, since global growth in services trade has been outpacing merchandise trade, the sector provides immense growth potential.

A possible solution lies in harnessing jobs from the growing “servitisation” of businesses or the shift towards provision of services to supplement traditional product offerings. The classic example is the Rolls-Royce airplane engine programme, where consumers “pay by the hour” for the use of the engine rather than paying for the engine itself and the company, in turn, assures regular repairs. Such shifts in business models offer significant opportunities for job creation and growth within the service sector.

The times they are a changin’ and the ideas to power economic growth need to keep up.

The article was published with Economic Times, Business Standard, and Millennium Poston April 18, 2018.