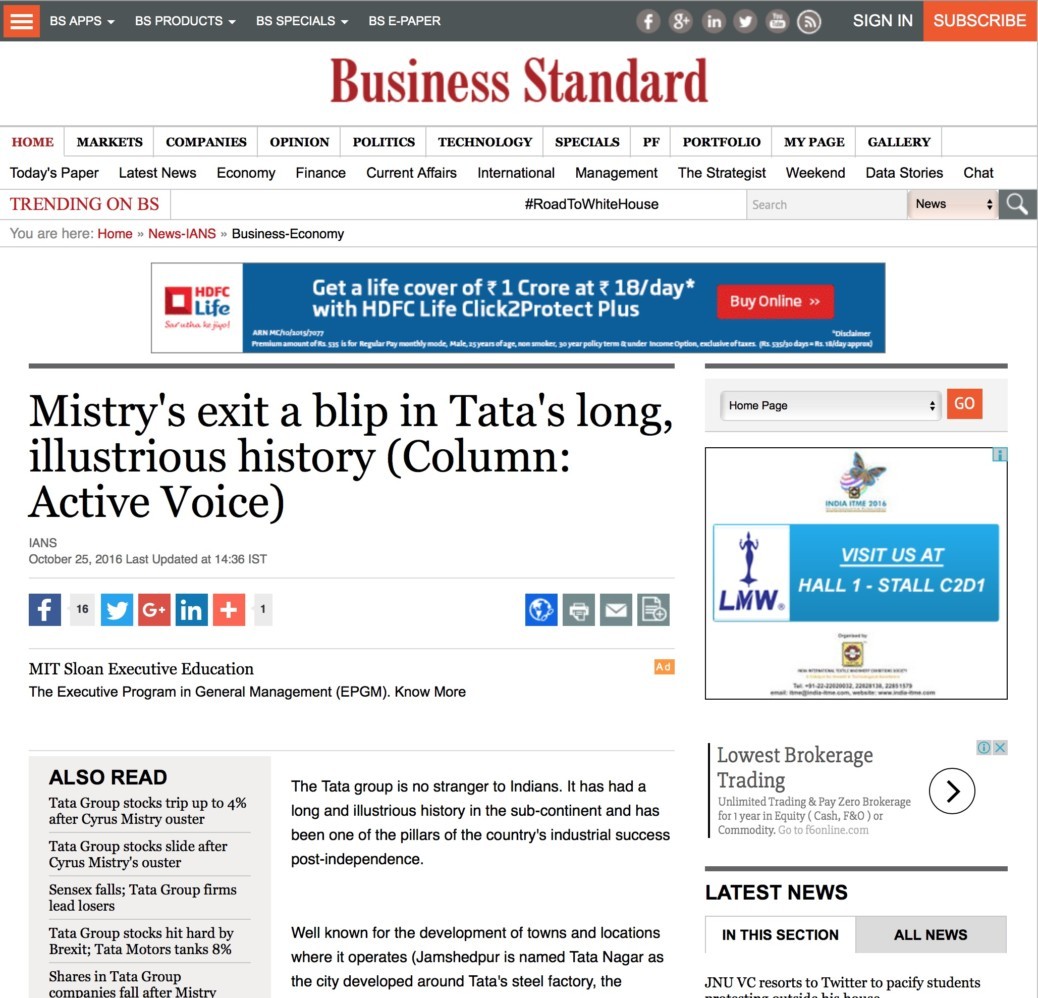 The Tata group is no stranger to Indians. It has had a long and illustrious history in the sub-continent and has been one of the pillars of the country’s industrial success post-independence.

Well known for the development of towns and locations where it operates (Jamshedpur is named Tata Nagar as the city developed around Tata’s steel factory, the municipality of Mithapur in Gujarat is run by Tata Chemicals), the group is the biggest conglomerate in India. It has combined revenues of $103.51 billion and is thus one of the largest conglomerates in Asia and the world.

The group is also one of the largest to provide employment (660,000 in 2015-16) and also in touching consumers in almost every household with their products and services which range from salt to tea to automobiles to watches to jewellery, IT services and more. It is also safe to assume that most Indians today use some or the other product or service of Tata’s. The Tata group has had only six chairmen so far in its 148-year history. Four of them have been Tata’s and only two have been people who have been close associates. It is in light of these realities that the October 24, 2016 decision to replace Cyrus Mistry as the chairman becomes crucial.

Several theories and different factors are floating in the media ever since. All, some or none of these could have contributed to the decision. Let’s start with the absurdest of these.

The most ridiculous is that Mistry is an Irish citizen. It is inappropriate to think that would have made any difference to his being removed. In that case, he would not have been appointed by the board in the first place. Descent does not seem to be an issue in this specific case.

The second theory that is going around is a family feud. Some commentators are even linking these to the ongoing political feud one is witnessing in the Yadav family in UP just before the 2017 assembly elections. But industry insiders point out that Ratan Tata, named the interim chairman, does not have the persona to remove someone for not being a family insider. Besides this, Mistry has been removed by the board and not by Tata alone. The broader point that commentators are making is about the larger social dynamics at play in the society that could have had a bearing on the decision. However, this also does not seem plausible alone to explain Mistry’s removal.

The third factor could have been responsible is the change in approach to viewing investments. Under Tata, the group had made several acquisitions in India and overseas. European steel maker Corus was acquired in a $12.9 billion deal in 2007, and Jaguar Land Rover was acquired in a $2.3 billion in 2008. The Tata group acquired some 40 companies from 2005-2008. This was also the boom period in the global economy.

In contrast, during Mistry’s time, the group was mostly seen to be divesting assets. The UK business of Tata Steel was sold to to Greybull Capital, Tata Chemicals sold a urea plant in UP, Tata Communications sold the majority stake of its data center business to Singapore’s Temasek holdings; all this underlies a harsh environment and a different business approach which focusses on return on capital.

Though Tata companies under Mistry have also made aquisitions — Tata Power acquiring Welspun’s renewable energy business earlier this year, for instance — they are few and far in between. Added to this was the order by an International Arbitration Court to pay $1.17 Billion to Japan’s NTT Docomo for breaching their agreement. Thus, business interests and the way of functioning seems to be like a likely factor that could have had a bearing on the decision of the board.

The final factor could have been the personal equation between Tata and Mistry. Industry insiders point that Tata was increasing distressed about Mistry’s way of functioning. This could have been an additional factor to the return on capital and differences in working styles, which could have resulted in Mistry’s removal. His performance as head of Tata Sons does not appear to be particularly bad but was not as stellar as well as acquisition-oriented as Tata’s was during his time which saw manifold expansion.

The most likely fallout of this significant development is uncertainty in the near term, which most industry insiders believe is not good for the diverse businesses of Tata Sons. Given that Tata has been reinstated showcases the trust and faith the board has in him and his statement to his employees means he will stand guard to ensure a smooth transition. The PMO being apprised is also a positive development in this regard.

This is probably a blip in Tata’s long and illustrious history in India. How Tata group moves from here on is for posterity to decide, but the fundamental questions of corporate strategy, corporate governance and transitioning and transparency in boardrooms in the Indian context are broader points on which there are no clear answers as yet.

Published in Business Standard on October 25, 2016. To know more