Leveraging Innovation in a Post-COVID World 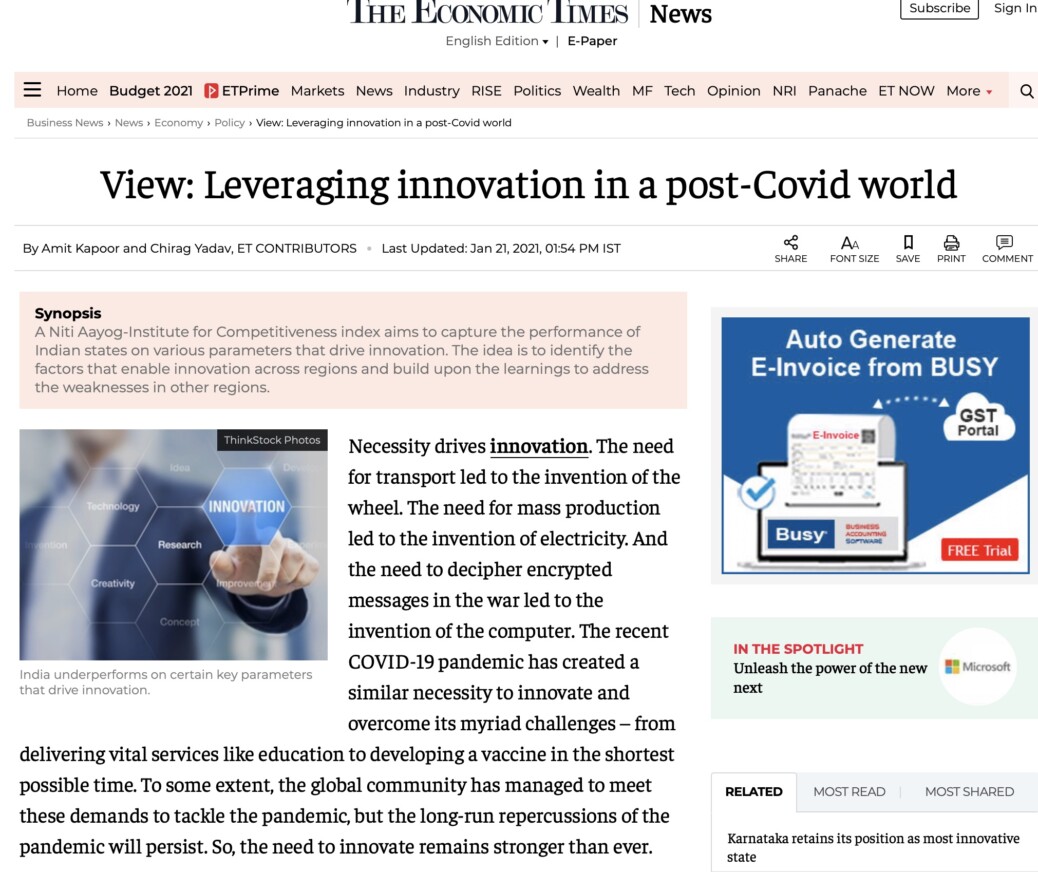 Leveraging Innovation in a Post-COVID World

Necessity drives innovation. The need for transport led to the invention of the wheel. The need for mass production led to the invention of electricity. And the need to decipher encrypted messages in the war led to the invention of the computer. The recent COVID-19 pandemic has created a similar necessity to innovate and overcome its myriad challenges – from delivering vital services like education to developing a vaccine in the shortest possible time. To some extent, the global community has managed to meet these demands to tackle the pandemic, but the long-run repercussions of the pandemic will persist. So, the need to innovate remains stronger than ever.

India has been exemplary on this front. Over the last decade, it has made significant progress in establishing itself as a hotbed for innovation. With 21 unicorns valued around $73 billion, India is the third-largest start-up ecosystem in the world. And the success of the ISRO’s Mars Orbiter- Mangalyaan – at the cost of $74 million – is not only an example of stunning affordability but also of India’s technological prowess. Unsurprisingly, India climbed into the top 50 innovative nations in the world in 2020 on the Global Innovation Index (GII) from a rank of below 80 in 2015.

However, despite such a strong performance on GII, the country underperforms on certain key parameters that drive innovation. First, India’s spending on research and development (R&D) stood around 0.64 percent in 2018-19. While this level of spending is far behind advanced economies like Israel that spend almost 5 percent of their GDP on innovation, it also falls behind developing economies like Brazil (1.2 percent) and Russia (0.98 percent). Second, India also lags on another crucial aspect of innovation, which is the proportion of people engaged in R&D. While India has about 253 researchers per million people, countries like Denmark and South Korea have around 8000 researchers per million. Lastly, unlike most nations, the bulk of the Indian R&D expenditure comes from the government sector. The government’s share in R&D expenditure accounts for about 57 percent. While the same figure stands at 1.5 percent for countries like Israel. The private sector has been less proactive in India in driving R&D upwards.

These statistics warrant studying the Indian innovation ecosystem in greater detail. Given the vastness of the country where each region has its unique strengths and weaknesses, it is instructive to delve into a state-wise performance of the country on innovation. Keeping this in perspective, NITI Aayog has published the second edition of the India Innovation Index in partnership with Institute for Competitiveness. The index aims to capture the performance of Indian states on various parameters that drive innovation. The idea is to identify the factors that enable innovation across regions and build upon the learnings to address the weaknesses in other regions. There are a few broad learnings that can be made from the index.

First, on an average, Indian states score 23.4 out of a maximum of 100. The score shows the immense scope for improvement that remains for the country in terms of innovation. On an average, the best performing pillars on the index are the Safety and Legal Environment and Human Capital while the most concerning pilar is Investment, which includes the expenditure of state governments on R&D among other indicators.

Second, the index shows that the southern states of the country perform better than the rest of the country on innovation. In fact, the top five major states in the rankingsare all from southern India. A leading reason for the superior performance of this region on innovation is the massive pool of talent in these states due to their historical legacy of investments in higher education. Additionally, these states also command the bulk of the investment in innovative activities through venture capital deals and foreign direct investment.

Finally, the pillars of the index have been segregated into the Enablers and Performance dimensions. The former captures pillars that drive the innovation capabilities of regions while the latter encapsulates the outcomes achieved by leveraging those capabilities. The index shows that the states that haveperformed better on Enablers have also performed better on Performance. This implies that investing in enabling factors of innovation ensures improved performance on innovation outcomes.

The learnings from the index are only a macroscopic view on innovation across Indian states. It is a crucial tool to obtain a broad judgement on where regions stand with respect to various facets of innovation. Therefore, while the index can help policymakers make improved policy choices on enhancing the innovative capacities across regions, each state needs to work towards addressing its own set of unique challenges. The recovery of the Indian economy in the post-COVID world rests on how it leverages innovation in the coming years.

The article was published with Economic Times on January 21, 2021.