Considerations on the Rule of Law 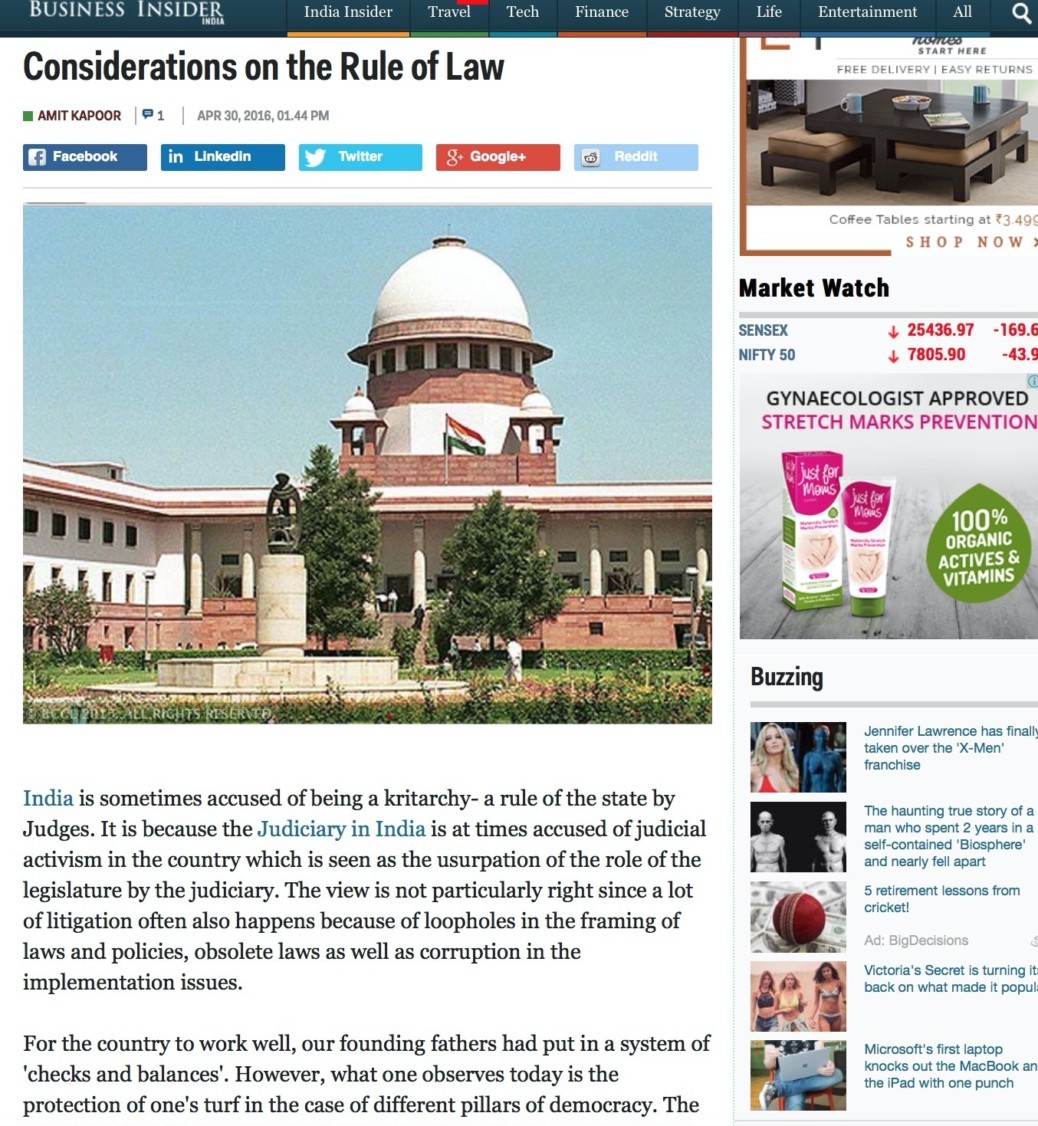 India is sometimes accused of being a kritarchy- a rule of the state by Judges. It is because the Judiciary in India is at times accused of judicial activism in the country which is seen as the usurpation of the role of the legislature by the judiciary. The view is not particularly right since a lot of litigation often also happens because of loopholes in the framing of laws and policies, obsolete laws as well as corruption in the implementation issues.

For the country to work well, our founding fathers had put in a system of ‘checks and balances’. However, what one observes today is the protection of one’s turf in the case of different pillars of democracy. The question of turf issues seems to have dictated the discourse especially when one sees the judiciary and legislature disagreeing over the NJAC. However, a recent meeting showcased a positive approach to finding solutions to the problems facing the judiciary. It was the Joint Conference of Chief Ministers and Chief Justices of the High Courts on April 24, 2016. PM Modi, the Law Minister as well as the Chief Justice of India, Justice Thakur and several CM ‘s were also present during the Joint Conference.

The CJI Justice Thakur made an emotional appeal to the PM to look into the problems facing India regarding enforcing a rule of law. In what could be described as a brilliant synthesis of the problems facing the judiciary he took up the matter of judicial pendency and its relationship to the judge strength in the country. He mentioned that 60,216 cases were pending before the Supreme Court, and a massive 38,68,000 cases are pending before the High Courts of the country as on April 2016. He alluded to the 1987 Law Commission Report, which clearly mentions the increase of Judge to citizen ratio by five times to 50 judges per million people. He also expressed concern over the slow pace of progress in this regard. At present too the judge to citizen ratio continues to languish at close to 13-14 judges per million people.

Moving on the honorable CJI also described the workload of judges in India and mentioned that the Judges in India were above the rest when it came to resolving matters. He alluded to the fact that in the US the nine judges resolved 81 matters in a year while in India each judge resolved close to 2600 matters in a year. Other issues in his address touched upon matters of commercial courts which are supposed to providing corporates a better and efficient environment for the resolution of disputes. But the CJI mentioned the approach of selling ‘old wine in new bottle’ namely of changing names of courts and not providing the infrastructure required results in the converse of what the initial objective was in setting up these commercial courts – namely of projecting a credible image of Indian judiciary. Overall, the CJI Thakur spoke with honour and a rare emotionality and put forth a case for better and efficient access to justice for the litigants and people of India. He appealed to rise to the occasion as justice delivery is a critical prerequisite for development.

In a brief response, PM Modi acknowledged the CJI’s concerns by mentioning that they were important and also mentioned if there are no constitutional boundaries a closed-door discussion could be held where solutions could be found to the problems facing the judiciary between a team of officials of the Government and Judiciary. In addition, he also mentioned that despite the challenges the common man still has faith in the judiciary and this is where it is the responsibility of judiciary as well as the governments to ensure that this trust and faith remains intact. He also mentioned that the there is a need to rid the common man of unnecessary laws, and this is where several laws have already been done away with as these were sometimes used to cause unnecessary litigation.

Overall the discussions were heartening to see. One issue which could have been added to the speech of CJI Thakur was increasing the allocations and funding and capacity building processes for the judiciary. The way ahead for the judiciary and the government is to engage in meaningful discussion so that people of the country are not denied justice. The meeting was a reminder that protection of turf is not the primary role of the various pillars of the state. Their primary role is providing people with access to justice as well as basic goods and services. Hopefully, what has not been implemented since 1987 should get taken up by the present dispensation and implemented. That will be a legacy that citizens of India will remember.

Published in Business Insider on April 30, 2016. To know more