Slowdown may not last beyond 2-3 quarters

Home Slowdown may not last beyond 2-3 quarters 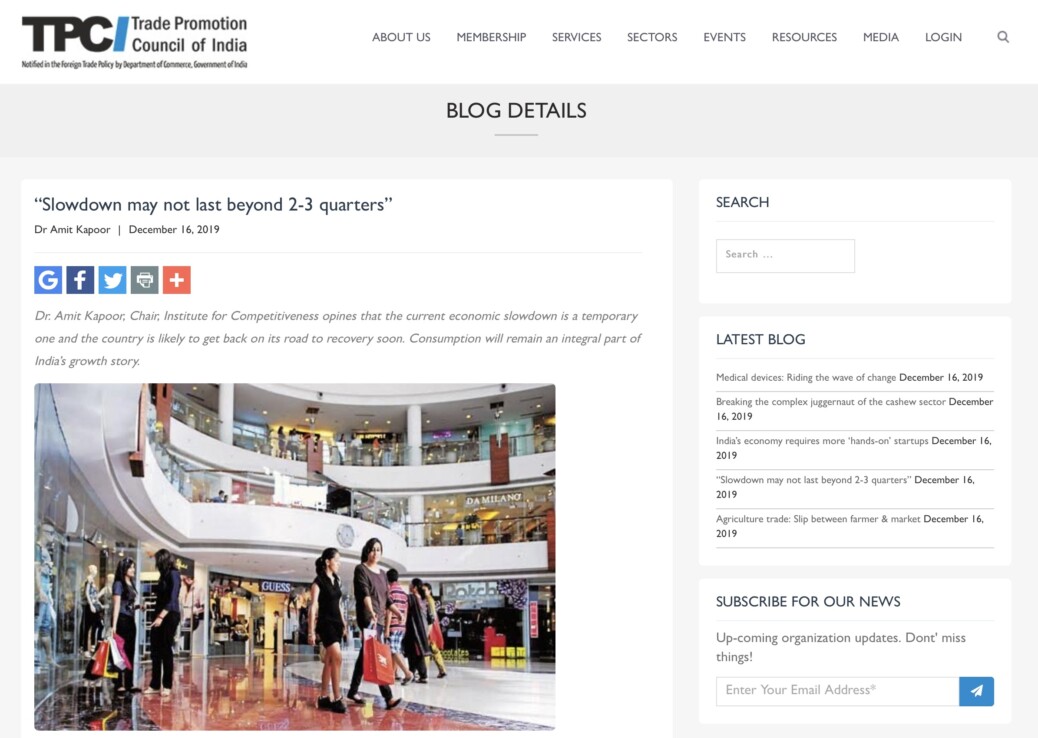 Dr. Amit Kapoor, Chair, Institute for Competitiveness opines that the current economic slowdown is a temporary one and the country is likely to get back on its road to recovery soon. Consumption will remain an integral part of India’s growth story.

IBT: India’s consumer market has been a major attraction for multinational companies across the world in the past two decades. How has the market performed vis-à-vis its projected potential at the turn of this century?

Dr. Amit Kapoor (AK): Indian market has performed fairly well over a period of time. The growth story has been quite intact. In fact, this growth story of the Indian market has been driven by consumption itself. The people with higher disposable incomes, as they were moving out of poverty, were the driving force behind this. It is only right now that we are seeing a certain set of skirmishes in the economy. However, over a period of time, the potential of the Indian economy remains fairly high.

At the end of the day, it is all about the population that we have; there’s something very unique about it – because of the lack of services/products, the market is ready for an uptick because people are willing to pay for better products and services. Therefore, the sophistication of demand has increased in India. For instance, people who wanted tumble top washing machines now want new options like front loading. So, the consumer is becoming much more aware and this will continue to get even more sophisticated with time.

The only thing is that this slowdown or lesser growth is a temporary phase and we will be in the right direction over a period of time.

IBT: What have been the most interesting evolutions in Indian consumer behavior in these decades? What are the driving factors, and what are their implications for B2C firms?

AK: The last 20 years have been the most significant phase in the history of marketing because it changed a lot! Until about ’94-’96, we did not have the internet; so, the information that we used to have about products was very limited. Even when we got this information, there was a delayed effect; I was not even aware about the prices. But now, with the advent of the internet, the information asymmetry has reduced. The consumer has become much more aware. So, today, I know what product is getting launched where, what is its price, what are its features, etc. In fact, if you look at the mobile phone industry, India has probably one of the most interesting markets: if you talk about any category of persons, there are people who change their phones every one year or so.

Today, India has around 400 million people with smartphones. There are also those people who own feature phones. Not every person is super rich. We have the middle class that wants to switch its phone. If you look at an Rs 80,000 phone and a relatively less expensive smartphone, you’ll notice that they both offer you platforms like WhatsApp, Twitter, Facebook, news, etc. So, people are being able to use these services. In fact, there has been a democratization of services that we are seeing. In fact, everybody can consume everything.

IBT: How is the Indian consumer different and similar to the rest of the world today?

AK: India has a very unique market because Indians are very value conscious customers. They’re not price conscious; they’re value conscious. They want the best out of the possible price that they pay. For example, if the consumer can get a TV for say Rs 80,000 of a lesser known brand and he’s getting a Sony TV for Rs 2/3 lakhs, he’ll ask why should I pay so much? So, the Indian consumer is very discerning. He wants the best out of his investment when he buys a product or a service.

IBT: The rise of e-commerce has led to a spurt in the number of brands across categories in the Indian market. What implications does this have for brand strategy?

AK: When there are more products available, there are more choices. So, brands become much more important in a situation like this. They have to continuously work in a market and tell people what they stand for. So, people have to stay true to their values, because if they don’t do that, they’ll lose out. If I’m a brand called X and I stand for say sophisticated manufacturing, I’ll have to stand by it and make people aware of it, and then consumers will come to you, because the alternate  choice is always there! It has become important for brands to stay true to what they stand for; because otherwise, they’ll lose out. So, an Indian customer is going to ask for the right brand, the right value, the right price, etc. Thus, branding is going to become more important.

IBT: How has the Indian consumer’s approach towards homegrown brands evolved over these years?

AK: There are many homegrown brands like Sula Wines, for example. If you really look at this category, you’ll see a lot of things happening. The service providers or manufacturers are now understanding that there is a potential for Indian brands that actually exists. Sula Wines is a great example of this. It is only a matter of time when it will become the best in class or they’ll be able to charge more as compared to the other sophisticated wines. Today, the consumer is willing to have a look at Indian products.

There is also another trend that you have  – Indian companies that sell products with international names. So, it seems to the marketers that Indian consumers have a fetish for foreign brands. There are numerous Indian brands which sound foreign, but are Indian.

At the end of the day, Indian companies are going to create the power of their own brands. Let me give you an example. There’s a product called gamcha. It’s a scarves brand which is manufactured in Bhagalpur but it is being sold all over Europe. It is a high-end brand for which people are willing to pay because of its handcrafted products. So, we will see the rise of more and more Indian brands as we go along.

IBT: The recent slowdown has also been linked to the souring of India’s consumption story. What factors have impacted consumption, and how do you see it panning out in the future?

AK: People have a little less disposable income. So, that is where they are spending less. I will not say that it is the souring of the consumption story. I think we are seeing that the slowdown will be there for a limited period; I don’t expect it to last beyond 2 or 3 quarters. Indian economy will start kicking off; people will start going to the shops and buying goods. At the same time, there are certain products – like gold – which have not shown signs of a slowdown.

Whenever there is a negative sentiment in the market, then people also do get worried. That is what is happening right now. So, it is really a question of mood & time. But in the next 6-9 months, we will go back to normal.

The interview was published with Trade Promotion Council of India on December 16, 2019.