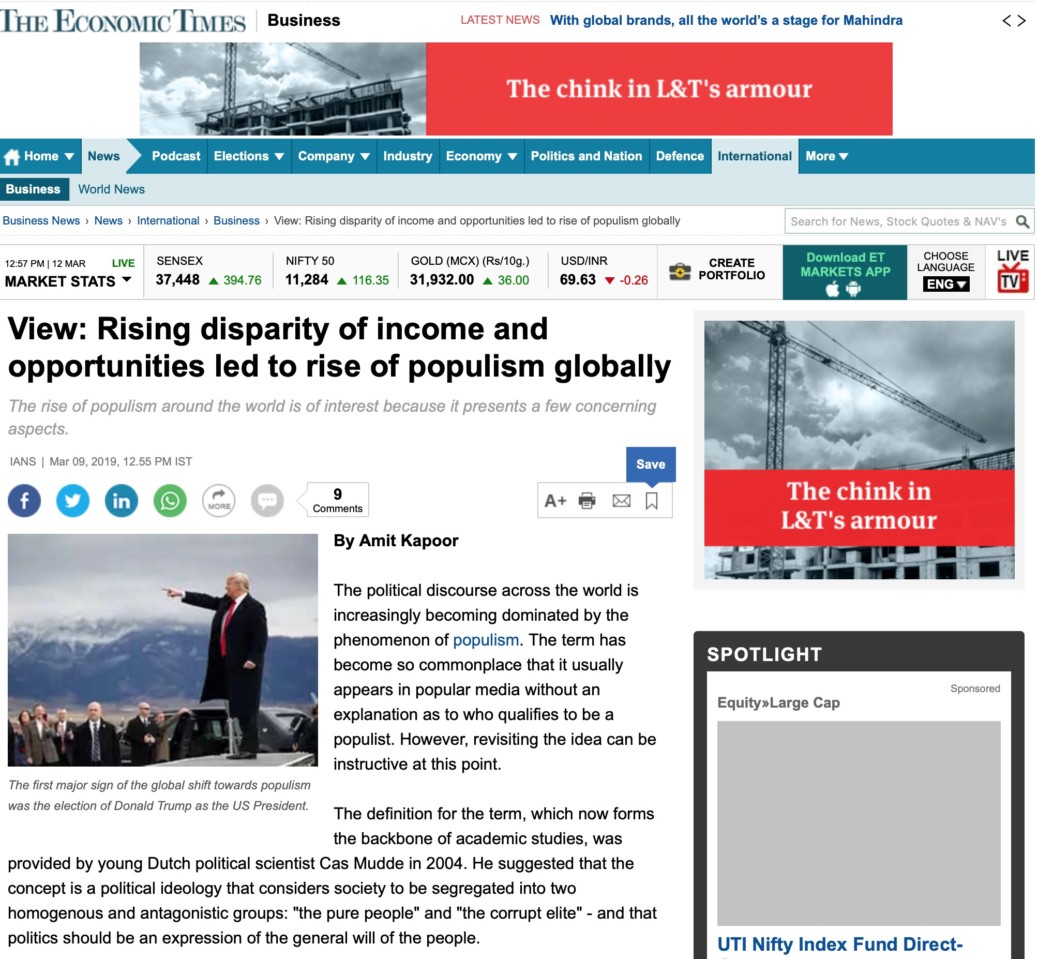 The political discourse across the world is increasingly becoming dominated by the phenomenon of populism. The term has become so commonplace that it usually appears in popular media without an explanation as to who qualifies to be a populist. However, revisiting the idea can be instructive at this point.

The definition for the term, which now forms the backbone of academic studies, was provided by young Dutch political scientist Cas Mudde in 2004. He suggested that the concept is a political ideology that considers society to be segregated into two homogenous and antagonistic groups: “the pure people” and “the corrupt elite” – and that politics should be an expression of the general will of the people.

The first major sign of the global shift towards populism was the election of Donald Trump as the US President. Populists have been successful in other countries as well. Rodrigo Duterte in the Philippines, Recep Tayyib Erdogan in Turkey, Victor Orban in Hungary and the Finns Party in Finland are evidence of the expanding global footprint of populism. Such trends point towards a larger shift in attitudes of citizens around the globe that are rapidly changing the face of democracy.

The rise of populism around the world is of interest because it presents a few concerning aspects. Cas Mudde highlights that populist leaders usually carry one or all of the following traits: anti-establishment, authoritarianism, and nativism.

Since the idea is about the virtue of the ordinary people against a corrupt establishment, populist leaders display resentment for existing authorities. The aversion of populist leaders to institutional restraint can also extend to the economy, where exercising complete control in the interest of the people implies that autonomous regulatory agencies should place no obstacles in their way. Alongside, they also exude authoritarian leanings as they believe to be representing the interest of the masses. Finally, the narrative set by populist leaders taps into the feeling of nationalism among the citizens, which can develop into xenophobic tones like in Trump’s America or Nigel Farage’s Britain.

A combination of these three traits undermine and weaken the idea of democracy by making its institutions ineffective, concentrating power around a few individuals and polarising the people.

It must also be noted that populism is not necessarily a movement of the right. Quite a few populist parties around the world favour economic left-wing policies. In fact, one of the most populist leaders in recent times, Hugo Chavez, rallied Venezuela against the ‘predatory’ political elite and the US as a whole while attempting a socialist revolution in the country. Even Trump, for that matter, presents instances of socialistic tendencies in his advocacy of trade barriers and opposition to global trade deals. Thus, it is not necessarily a particular ideology that is driving the rise in populism. The root causes lie elsewhere.

The reasons can be traced to the structural changes experienced in earlier decades. First, the technological revolution which took shape in the 1980s has since disproportionately benefited highly skilled workers while the rest of the workforce, especially in the developed world, saw their incomes stagnate or decline. This was the beginning of the growing economic disparity between the ‘elite’ and the masses. Among other things, it has resulted in a significant growth in inequality across the modern society.

Second, globalisation, which accelerated in the 1990s also created clear winners and losers in both developed and emerging markets. As per the Heckscher-Ohlin theorem, trade benefits individuals who own factors with which the national economy is relatively well-endowed and hurts individuals who own factors that are relatively scarce. Hence, in the most developed nations that were capital-rich, unskilled workers were left holding the shorter end of the stick. These segments of population have been the strongest supporters of populist leaders who promise to close the borders and return their jobs to them.

Finally, the last straw that broke the camel’s back was the 2008 financial crisis. It was a crisis that the working class saw as being a creation of the ‘elite’: the rich bankers and stock brokers. To make matters worse, the state bailed out the instigators of the crisis while the rest were left to deal with the consequences of austerity and joblessness. They have, thus, connected with populist leaders who have seemed to be the only ones speaking their language.

Therefore, rising disparity in terms of income and opportunities has led the rise of populism around the world. The populist movement is an outcry from communities that have been short-changed in the process of technological progress and globalisation; from those who have seen growth all around them but not for themselves.

Every industrial or technological revolution in the past has been disruptive and has required social and economic adaption. The 21st century needs a commensurate adjustment.

The article was published with Business Standard, Outlook India, Economic Times and The Hans India on March 9, 2019